June was a busy month. For Avionics, the month was highlighted by the Paris Air Show and by our editor receiving the “Bill Gunston Technology Writer of the Year Award” at the Media Banquet the night before its start. We also held our Global Connected Aircraft Summit in Arlington, Virginia, where representatives from Facebook, Google, Netflix and more discussed the connected aircraft. With so much happening around the industry, we never came close to running out of items to write about. These were Avionics’ most-read online articles of June 2017:

10. Airbus A350 Operators Get a New ACARS in Paris

Kicking off our list is a little something from the Paris Air Show. Rockwell Collins has its own ACARS network, with a service called, “ARINC GLOBALink A350 Media Independent Aircraft Messaging (MIAM).”

“On the third day of the Paris Air Show, Boeing did something that it typically does not do …” Did you see this? Check out our ninth most-read article of June.

The turbocharged version of the Airvan 8 is a step closer to flying in U.S. and Australian airspaces. Airvan 10 is on its way up.

7. Could General Aviation Use a Digital Co-Pilot?

Since Avionics is based in the Washington, D.C., area, we have the privilege of being able to visit companies that are pushing the limits of what is possible in aviation. During our visit to Mitre Corp., we got a chance to see a digital co-pilot in action. Have you ever dreamed of asking your display, “What is the weather like at Dallas Love Field right now?” while flying your airplane?

While we do not publish a print magazine every month, when we do publish, we are very excited that we can share it online. If you didn’t get a chance to hold a copy in your hands (click here to subscribe), you can check it out on your screen.

Robert Moorman writes about how the Boeing 777X will bring innovative, across-the-board avionics. This article is from the June/July issue of Avionics.

Electric aircraft and autonomous aircraft are two hot topics around the aviation industry. No longer just a fantasy, manufacturers have started developing airframes and technology that might bring the future closer to the present than some may have anticipated. Check some of them out in this article.

During the Paris Air Show, Avionics Editor Woodrow Bellamy III knew to have his eye out for 16 aircraft that would be making their Paris debuts. With that list, he wrote the third most-read article of June.

In this article from the June/July issue of Avionics, Ken Elliott writes about how industry groups are progressing toward making WAIC a reality. 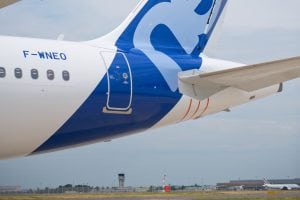