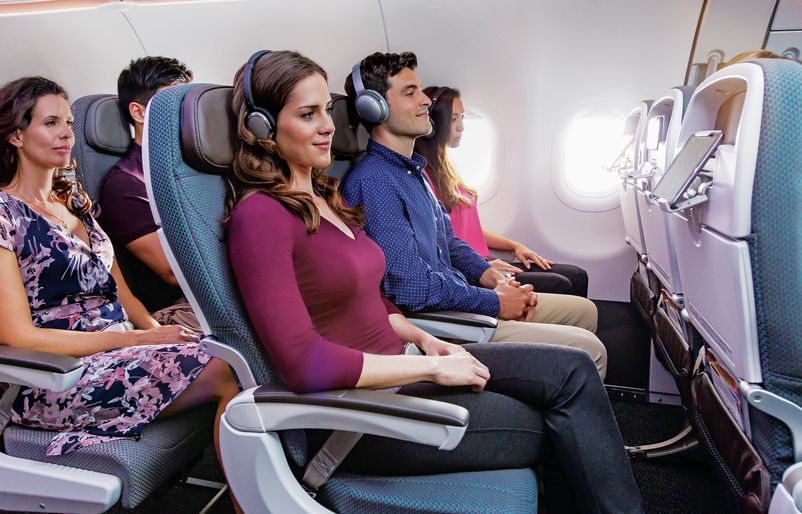 Hawaiian Airlines has a new agreement with SpaceX to add in-flight internet service enabled by Starlink connectivity to its fleet of Airbus and Boeing aircraft. (Photo, courtesy of Hawaiian Airlines)

Hawaiian Airlines has become the first major airline to reach an agreement with SpaceX that will add in-flight connectivity (IFC) service enabled by Starlink satellites to a fleet of Airbus and Boeing aircraft with installations scheduled to begin next year, according to an Apr. 25 announcement from the company.

The Hawaiian Airlines agreement follows last week’s announcement by California-based public charter operator JSX that it would become the launch air carrier for Starlink IFC, with the first passenger-carrying flights featuring the new service to begin later this year. Several days after the JSX announcement, Hawaiian Airlines unveiled its own new agreement with SpaceX to add Starlink connectivity to its fleet of Airbus A330 and A321neo aircraft, as well as the Boeing 787-9s it currently has on order.

In an emailed statement to Avionics International, Alex Da Silva, a representative for Hawaiian Airlines confirmed that the Starlink IFC service will be complimentary to passengers.

Hawaiian's fleet of Boeing 717s that operate shorter inter-island flights will not be equipped with Starlink IFC terminals. According to the airline's 2021 annual report filing, Hawaiian’s in-service fleet consists of 24 total A330-200s and 18 A321neos, with 10 total 787-9s on order under a 2018 purchase agreement with Boeing.

Starlink is the first in-flight internet service that will be offered by Hawaiian, as the airline currently offers access to wireless streaming in-flight entertainment (IFE) content on its A321neo flights, and other forms of IFE on other aircraft models—with no connectivity currently available onboard.

“We waited until technology caught up with our high standards for guest experience, but it will be worth the wait," Hawaiian Airlines President and CEO Peter Ingram said in a statement.

Starlink is SpaceX’s Low-Earth Orbit (LEO) satellite constellation, one of several whose operators have eyes on disrupting the IFC market by offering high-speed access to broadband in-flight at a lower cost. SpaceX Vice President of Starlink Commercial Sales Jonathan Hofeller has been discussing the company’s vision for IFC during several public appearances over the last year, including most recently at the Satellite 2022 conference in Washington D.C.

“Hawaiian Airlines is ensuring its passengers will experience high-speed internet the way we expect it in the 21st century, making hassles like downloading movies before takeoff a relic of the past,” Hofeller said in a statement. “With Starlink, the in-flight experience is greatly simplified so that once passengers step onboard the plane the internet works seamlessly throughout their flight. Soon, passengers will enjoy all the benefits of having the world’s best inflight internet connectivity from the comfort of their seats.”