The U.K.-based satellite operator's technology roadmap for Orchestra extends into the 2040s, operating as a dynamic mesh network that will eventually enable "direct-to-cloud" connectivity for airlines along with a significant expansion in the amount of capacity available for existing L-band and Swiftbroadband users. 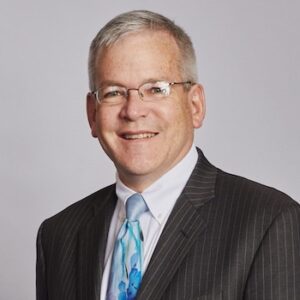 Peter Hadinger is the Chief Technology Officer of Inmarsat.

Avionics International: In terms of the I-6 satellites, what makes these fundamentally different from the fourth generation spacecraft that are mentioned in the press release, and what is the enabler on these new satellites that allows for this improvement in capacity and speed for the L-band network?

Hadinger: The investment in the Inmarsat 6 series of spacecraft, which is a considerable investment, is about ensuring the longevity of our L-band services. Aviation and other mobility users have come to rely on Inmarsat for safety and many other critical infrastructure capabilities. The Inmarsat 6 investment represents an extension of that.

The launch comes almost 15 years after we launched the Inmarsat 4s, and as a result, technology has improved and we're able to do a lot more things with the I-6s than we were able to with the I-4s. When you look at the capacity of a satellite, the capacity of satellites is a function of two things, it's of the bandwidth and of the power and you have to have both, you cannot just have the bandwidth or just power. The Inmarsat 6 satellites have access to 50 percent more spectrum than the I-4s. That means we have a lot more bandwidth at our disposal and have nearly doubled the power on the I-6s as compared to the I-4s. The sixth-generation has nearly double the number of beams and we can generate about four times as many simultaneous channels.

Inmarsat also recently announced ELERA, as a component of Orchestra that targets an expansion in speed and capacity for the L-band network. Considering a significant number of aircraft operators use the L-band network for cockpit safety services, what will this expansion mean for them?

Hadinger: All of the cockpit safety communications we enable today have moved over time from the Inmarsat 2s and I-3s, the Inmarsat 4s, and now to the Inmarsat 6s that all carry straight through. The big users, on the high-speed end of ELERA, are going to be business aviation, where you have small aircraft antennas that today are serving private jet owners. That segment of aviation is always looking for faster and faster video conferencing and things like that onboard their aircraft. The ability to quadruple the speeds we give them means they can get more functionality out of the existing terminals they have.

It's important to know that in almost all cases on an airplane, this network expansion and upgrade does not mean a change to the antenna. So the fuselage stays exactly the same. If you have a relatively modern radio inside, it can be upgraded as easily as using a flash drive that upgrades the software inside the radio. In other cases, it might mean swapping out a few cards in the radio, but it does not mean re-wiring the plane or having to install a new antenna or anything like that.

Considering Inmarsat envisions Orchestra as a configuration of its L-band and Global Xpress (GX) networks with terrestrial 5G and eventual low earth orbit (LEO) capacity, what will aviation users see in terms of service advancements as they’re continually rolled out and stitched together?

ELERA is focused on the L-band space, but it is also an important piece of Orchestra. We’re seamlessly connecting together not just the L-band, but what we're doing in GX and what we're doing in some future infrastructures to include LEOs and 5G to make sure that we have a very large number of possible ways of getting to the end-user.

Whether that's a pilot in the cockpit or a passenger in the cabin, Inmarsat is constantly investing in new pathways behind the scenes doing all the work to stitch it together so that the user doesn't really care what pathway it went through. It's just improved service that they see over time when they're signed into an Inmarsat network.

What're some of the main applications that ELERA as part of Orchestra can open up for business aviation operators of smaller and lighter aircraft?

Hadinger: The premier use of high-speed SwiftBroadband today is for the passengers in the back of a business aviation aircraft. However, the safety services part of SwiftBroadband is always paramount for us. One of the applications we've been developing for some time is work on our black box in the cloud. What this really does is it allows us to stream telemetry from the aircraft back to the operators in real-time.

Especially in the case of an emergency, this capability can essentially supercharge that telemetry rate from a given aircraft. We may not be doing this for all the aircraft, but if an airplane has an emergency situation that's either declared or is sensed, the service goes into overdrive and starts dumping telemetry and voice data and everything else that can be streamed off the aircraft back into the cloud.

That becomes a record that's available to investigators regardless of the outcome of an emergency. We already have a fairly significant effort in aviation started with the European Space Agency called Iris which is about improving the ability of an aircraft to know where each other are in the airspace and to take the most direct routes and to really get rid of some of the bottlenecks that exist in the air to ground VHF network by using satellite as a high-speed overlay.

Is ELERA being rolled out globally for airspace users across all segments, including military aircraft, or is there any regional market or specific segment Inmarsat is targeting?

Hadinger: There's nothing that Inmarsat does that is not global, so ELERA will be rolled out on a global basis. From a market perspective, the U.S. government is our single largest customer, as a customer, and almost every U.S. government transport aircraft, whether it's transporting VIPs or transporting boxes on large freight carriers, are connected by Inmarsat worldwide. So those users will be able to take advantage of the new advancements from ELERA and Orchestra moving forward.

Inmarsat is claiming that ELERA will lead to the creation of the “smallest footprint, low-cost terminal for L-band users.” What type of form factor will that terminal have for commercial and business aircraft, and will it require modification of existing L-band terminals for the existing equipment that they operate?

Hadinger: This obsoletes, nothing of what we currently do. So if you are a user of classic aero today, if you're a user of Swiftbroadband or Swiftbroadband safety today none of that changes. What we’re doing with ELERA through the satellite investments is making more capacity available to those L-band services. Through the ground network and advancements, it's going to allow new products to be introduced that have either smaller form factors or lower costs for certain applications.

For example, if you wanted to have some of the same safety services features that the airlines use in general aviation aircraft, that’s where you're looking at a terminal that needs to be quite small and much lower in cost. The opportunity to expand those services into the broader business and general aviation aircraft is also an opportunity that ELERA brings about because it does allow for the introduction of these lower-cost terminals.