European Aviation Groups Back Integration of Drones in Common Airspace 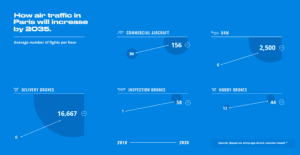 A paper by European and international aviation organizations this month backs the integration of drones in common airspace. Pictured is a projection of Paris airspace in 2035 (Airbus Photo)

A number of European and international aviation groups backed the integration of drones in common airspace in a joint paper published earlier this month by the Civil Air Navigation Services Organization (CANSO).

"Airspace is a finite resource with a growing number of actors – such as for manned and unmanned commercial, general aviation and air sports, military and search & rescue operations – all wanting to use it," according to the paper. "Creating a mature framework that enables different categories of cooperative users to share the airspace is the best way to ensure fair and equitable access for all. It is also fundamental to unlock the true value of the drone (new entrants) services industry. Some of the most beneficial potential applications for drones exist in areas where other aircraft are likely to operate – from close to airports to offshore oil rigs where helicopters may operate. Furthermore, there will be occasions when certain actors (e.g. emergency service helicopters) need to enter airspace that might predominantly be used by another type of user."

The paper advocates the maximization of "airspace capacity and value through integration, not segregation" of drones.

The adequate addressing of flight safety concerns is crucial to the full integration of drones in common airspace. In the United Kingdom, drone sightings near Gatwick Airport runways in December 2018 caused hundreds of flight cancellations, and in the United States, Los Angeles International Airport (LAX) has had more than 200 drone sightings near the airport since April 2016, but the airport was only able to identify and contact the operator of the drone in one instance, LAX CEO Deborah Flint, a member of the Federal Aviation Administration's Drone Advisory Council (DAC), said last month.

The DAC has recommended allowing drones to use either Bluetooth, Wi-Fi or network to meet remote ID industry standards by ASTM International. The FAA is to publish its notice of proposed rule-making (NPRM) on remote identification of drones for public comment next month.

"Drones will revolutionize many aspects of everyday life, from the way people travel, to agriculture, policing, mapping, deliveries, maintenance, asset management and construction," the CANSO paper said. "Information integration is key to integrating drones safely alongside manned aviation. Any regulatory framework must therefore ensure the availability of a consistent flow of information between all actors who may need to use the airspace. That framework shall take into consideration the legitimate need of some users to have their flight information protected (e.g. the military or police, or even some commercial operators). However, to deliver both safe and secure operations it is essential that a common and shared picture of the airspace, and any operations taking place within it at any given time, is available for those providing traffic services and other stakeholders with a major strategic interest (e.g. airport operators). This will enable the integration of manned and unmanned operations in controlled and uncontrolled airspace and ensure safe, secure and effective cooperation between manned and unmanned operators." 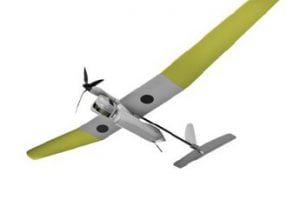 A Day in the Sun: Alta and Airware Integrate Solar Power into Small UAVs