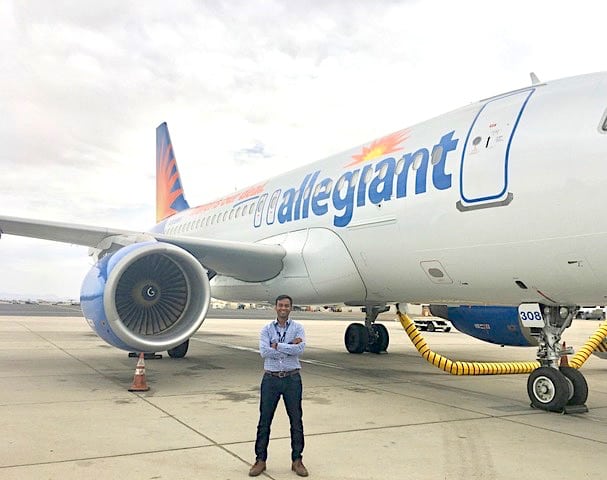 Sai Ravuru in front of an Allegiant jet. Photo courtesy of Allegiant Airlines

Sai Ravuru was first inspired to pursue a career in aviation by the film Star Wars, when he watched the spaceships take off and land automatically. He is the first ever flight operations performance engineer to be hired by Allegiant Air.

His educational background includes two master's degrees: one in aerospace engineering from the Georgia Institute of Technology and one in information and data science from the University of California, Berkeley.

Ravuru first post in commercial aviation was a flight operations engineering intern with Southwest Airlines, where he worked on the carrier’s first deployment of electronic flight bags (EFBs). Now he works as the lead performance engineer within Allegiant’s flight operations group and is a founding member of the Allegiant Technology Advisory Council.

The current applications he is working on are helping Allegiant become an increasingly data-driven, fully digital airline. He spoke to Avionics about that process and his experience getting there.

Tell us about your background and some of the previous jobs you worked in.

I actually started as an intern at Southwest Airlines while doing undergrad and into grad school. There I worked in flight operations performance engineering and worked on Southwest's first iteration of EFBs. That was a great opportunity to open up its EFB and do some real coding with respect to engine-out departures and obstacles and trying to maintain the safety of flight through performance engineering while providing a convenient way for pilots to interact and request data on the flight deck.

In grad school, I worked in computational fluid dynamics (CFD), developing computer simulations for missiles, gas turbine engines, and jet engines for supersonic aircraft, working with a lot of several defense firms and contractors and particularly the U.S. Air Force to simulate how different vehicle bodies move through the air at different speeds. After graduating, I got an offer with a consulting firm to become a reliability engineer and did some engineering consulting for defense firms, oil and gas firms among others.

I really missed aviation and wanted to come back. So when Allegiant reached out to me, I joined its flight operations department, and I was its very first flight ops performance engineer. It's been a great opportunity to develop some of the fuel-efficiency platforms here and develop new procedures around the safety of flight. It’s come full circle so far.

In light of your education, what influenced you to pursue engineering and then seek out your master's in data science?

I started off with a bachelor's in aerospace; I've always been interested in aerospace engineering. My vision behind joining aerospace was Star Wars, particularly how spaceships land and take off automatically without any ground control, without external influence — I wanted to develop a fully automated way of running an airline. That’s why I got into it.

The more I dealt with data, I realized its power and how it can enable you to come up with an automated flight deck and automated platform for flight operations which has been great. Berkley complements what I learned at Georgia Tech. Data science actually didn’t really exist until maybe five to seven years ago. Prior to that, Data science only existed in the realm of engineering. 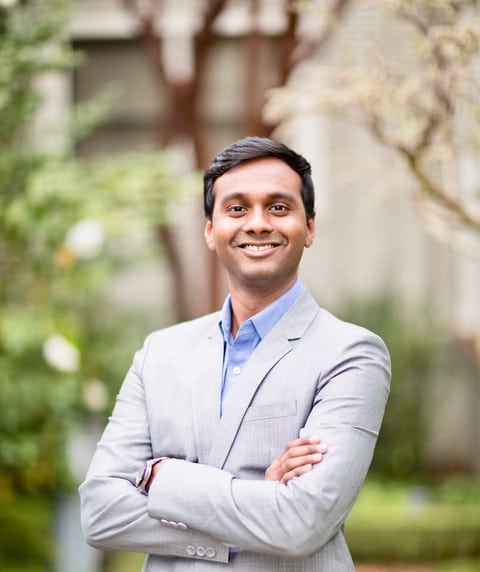 I like to use this reference given by the speaker at last year’s GE conference; he compared the MD-80 to the newest Airbus fleet coming out of production. The MD-80, which we have, and the A320 family, which we also have, are vastly different. The MD-80, on a typical given flight, produces somewhere around 30 mb of data. When you take the A320 family, you’re talking about close to a terabyte of data per flight.

We’re able to track everything from the temperatures of the tires when you land to what your fuel is at every point in time. Data points such as velocity, and flaps position are also analyzed, and we’re able to infuse all that data and build a complete 360-degree picture not only for pilots but also for folks on the ground.

We’re able to take all the data and use engineering subject matter expertise to predict how the aircraft on that flight is going to behave on the next segment, so you’re always ahead of the curve.

Can you take me through a typical day in your current role at Allegiant Air?

I have a foot in daily operations and a foot in future predictive operations. That really sums me up in my role at Allegiant. When I come in the morning, I usually deal with daily flight operations from the previous day, and from the perspective of have we seen anything outside the realm of normal operations, why are we seeing that and how can we fix it.

I also spend time going through all the emails from pilots, ground operations and the operations control center, so we can try to improve our existing processes. Then I dive into my current projects which center around performance engineering as well as fuel efficiencies.

I am really trying to help with the development of innovative new ways of bridging the gap between different airline departments.

Are there any projects you are working on right now or you recently completed that particularly piqued your interest?

Right now, I’m building an interconnected platform for fuel-efficiency programs. What the platform does is optimize our fuel consumption for each and every tail, while trying to predict down to the minute what our block hour is going to be. This has enormous implications because now I can feed that data back to our planning team and back to our induction team and they can start purchasing the right kind of aircraft that fits into our business model while trying to block our times and plan our routes based on what our optimized route structure should be.

The platform also predicts how high the aircraft is flying, how fast, what kind of crews to put on what kind of flights; it’s an interconnected platform because of my role between different departments.

One of the most interesting results that this platform has already produced was a new procedure design for an approach into our Phoenix-Gateway airport in Arizona. Using all of the available data that we have around safety, fuel efficiency and the tracks that we’re following for each and every flight, we’re able to identify pain points for pilots. We identified Phoenix-Gateway as an airport that needed a new approach to avoid general aviation traffic while maintaining a constant continuous descent, to save fuel. We developed that new approach, and right now it’s going through FAA approval.

One of your current responsibilities involves using large volumes of flight data obtained from digital flight data records (DFDR), FMC/ACARS and QARs and analyzing that data to improve flight planning, fuel burn and overall flight operational efficiency. How do you see that process evolving in the future?

In the future, we will be able to gather more data just based on Moore’s law. We’re also looking at how we can improve the process of obtaining data from the flight deck, through the QAR.

Airbus and Boeing both have mentioned how they want to open up the tap on the kinds of data coming out of the aircraft, but all of that data cannot be beamed to the ground at all points in time. The challenge is to pick what data is relevant at what point in time and then transfer it to the ground to stitch it together.

Right now the communication channel is mostly one way. In the future, I think it is going to be more two-way communication where we can interact live with our pilots without the constraints of data transmission.

On the ground, by ingesting larger volumes of data both in real time and planned data from the archives, we’re able to simulate for our C-level executives what the impact of different policies is going to be. When coming up with a brand new policy and we don’t know what the impact will be in the next year, we can simulate that and see what the outcome is going to be before we actually implement it.

All of this comes from my experience in aviation, CFD and data science. It all stitches back into enabling a fully digital flight deck and airline.