[Avionics Magazine 08-28-2015] AirCom Pacific, a new In-Flight Entertainment and Connectivity (IFEC) provider dedicated to the Asia Pacific, plans to launch its service in the first quarter of 2016. The company already has a committed customer and recently leased Ku- and Ka-band capacity from the AsiaSat 7 and 8 satellites for airlines flying over Asia.

AirCom Pacific is entering a high growth market, but one where new entrants are viewed with skepticism. Executives from several IFEC companies highlighted the challenge of entering this market when AT&T retracted its plans for an Air-To-Ground (ATG) network across the United States last year.

Yet, even with its challenges, it is no surprise that regional players will emerge in this field. AirCom Pacific is aware of the hurdles associated with entering the IFEC business and, according to Jan-Yung Lin, CEO at AirCom Pacific, it has the chutzpa to prove it will be successful.

“AirCom Pacific is a very young company; we are almost at the one-year mark,” Lin told Via Satellite. “Although we are fairly young, we have a core team that has very good experience in various areas that are related to this industry and this type of service.”

Lin said AirCom Pacific employees come from backgrounds in WiMAX, the satellite industry, and other IT-related telecommunications fields. Though based in California, in the United States, most employees are from Taiwan and knew each other before forming the company, he said.

“Right now we have a signed contract with Hong Kong Airlines to install up to 50 aircraft in their fleet. They currently have a fleet of slightly less than 30, but they do have a lot on order,” said Lin. “Right now our focus is to work with Hong Kong Airlines to develop a system so that when we launch we will be able to generate income and attract a lot of potential future customers.”

Using AsiaSat satellites, AirCom Pacific plans to offer services such as Wi-Fi, streaming TV, videos and gaming, cellular connectivity, and real-time shopping and travel services. The dual-band system uses Ka band when available, and Ku band elsewhere to ensure continuous coverage. AirCom Pacific intends to use satellite as its means of providing connectivity.
Lin described trying to build an ATG network in the Asia Pacific as akin to a nightmare. He said High Throughput Satellites (HTS) and Ka band are “almost like switching from dial up Internet to cable or even fiber,” and that AirCom Pacific wants to be a first mover when more Ka-band capacity is available across the region.

But perhaps more critically, Lin said AirCom Pacific aims to cement itself as a leader in IFC by taking a unique approach to the business.

“For most companies in this field I think they focus on the connectivity side and selling equipment to airlines or bandwidth to passengers. But these are all technology-based, and technology can only take you so far. After a while everybody will have similar or better technology. We are focusing on what we can do with respect to the increased capacity of in-flight connectivity. We do not sell our equipment to airlines and we do not sell our bandwidth to customers, but we install the system and it becomes ours. We operate the system and gain our revenue from the inflight system rather than selling the bandwidth,” he explained.

Lin said AirCom Pacific is focusing today on the markets of Taiwan and Hong Kong, as well as countries in South East Asia such as Thailand or Myanmar where it is easier from a regulatory standpoint to make business. The Asia Pacific has several small airlines operating under different regulatory regimes, he said, but AirCom Pacific is familiar with both governments and cultures in Asia, which should make navigating these markets less difficult.

Lin described China as what AirCom Pacific eventually sees as the biggest market for IFC, citing president Xi Jinping’s identification of IFC as a policy priority for aviation as one of the chief reasons. But China has very strict Internet and media regulations, which creates tension. Lin said the company is working on reaching this market, but does not expect immediate installation or deployment. Still, there is customer interest here and elsewhere, which he expects will further AirCom Pacific’s growth in this region.

“We are also in very close discussions with some other airlines, particularly ones in Taiwan. There are also some airlines in China who show great interest in us, but that is more of a long-term goal,” he said. 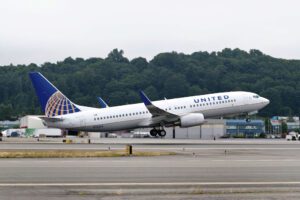