[Avionics Today 04-30-2015] American Airlines was forced to ground flights on Tuesday night and into Wednesday morning due to a glitch with its Electronic Flight Bags (EFBs) application. Around 7 p.m. U.S. Central Time on April 27, the EFB application installed on many of the pilot’s iPads crashed, causing the screens to go black, grounding several dozen flights and causing major delays.

“We experienced technical issues with an application installed on some pilot iPads,” a spokesperson for American Airlines told Avionics Magazine. “This issue was with the third-party application, not the iPad, and caused some departure delays last night and this morning. Our pilots have been able to address the issue by downloading the application again at the gate prior to takeoff and, as a backup, are able to rely on paper charts they can obtain at the airport.”

According to Jeppesen, the EFB software provider for American Airlines, a single Instrument Landing System (ILS) chart at the Reagan National Airport, which was duplicated in American’s database, was the cause of the issue.

“It wasn’t a software issue, it wasn’t an app issue; it was an issue of one chart being duplicated in their database. The app wasn’t able to reconcile the duplication and that caused it to become unresponsive and shut down,” said Mike Pound, a spokesperson for Jeppesen.

Reportedly, the app was unable to reconcile the two charts with the same title and index number, one of which was a current chart and a second that was set to become effective the next day.

“What happens when there is a chart with an effective date is that it becomes visible, if you will, to the user 24 hours before the effective date for awareness purposes. When we got to 24 hours before that effective date and time, the chart became visible to any of the American pilots that had favorited Reagan National Airport and that’s what caused the issue to occur, so that’s why it happened at about 7:00 Central Time,” Pound said.

Jeppesen and American were able to remedy the problem by having pilots uninstall and then re-install the EFB application, which sometimes required that flights ready to take off taxi back to the airport for a Wi-Fi connection that would enable them to do so. The duplication issue will be corrected with the next data set that American gets from Jeppesen, which will be on May 8, according to Pound. In the meantime the airline is pushing PDF files to flight crews who will be flying out of Reagan National Airport in Arlington, Va.

American Airlines went paperless in June 2013 in an adjustment that eliminated paper revisions to terminal charts in favor of a digital solution, making it the first major commercial airline to fully use tablets in all cockpits during all phases of flight. The application is installed in more than 8,000 iPads carried by every pilot and instructor in the American Airlines fleet, and touts an estimated $1.2 million in annual fuel savings for the airline.

The glitch comes about when many are becoming wary about new Internet-based applications appearing on aircraft, following a recently released GAO report that pointed to possible cyber security weaknesses as modern communications technologies and IP connectivity increase on modern aircraft. The report warned that hackers could potentially access avionics systems through the In-Flight Entertainment and Connectivity (IFEC) systems in the cabin.

As the FAA rushes to remedy the weaknesses in the cyber security for the aviation infrastructure, Jeppesen believes that incidents like this are anomalies and should see very little play in the future.

“This is the first time we’ve ever encountered this problem. The version of the software is unique to American, so no we don’t anticipate anybody else having the issue,” said Pound. “We’re confident that we’ve isolated it and it’s an anomaly. We of course will be doing a deeper root cause analysis to make sure that we fully understand what caused the situation, how it happened, and what can be done to ensure that it doesn’t happen again.” 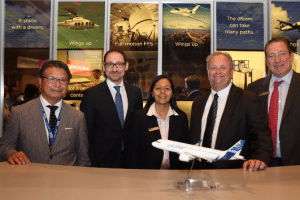