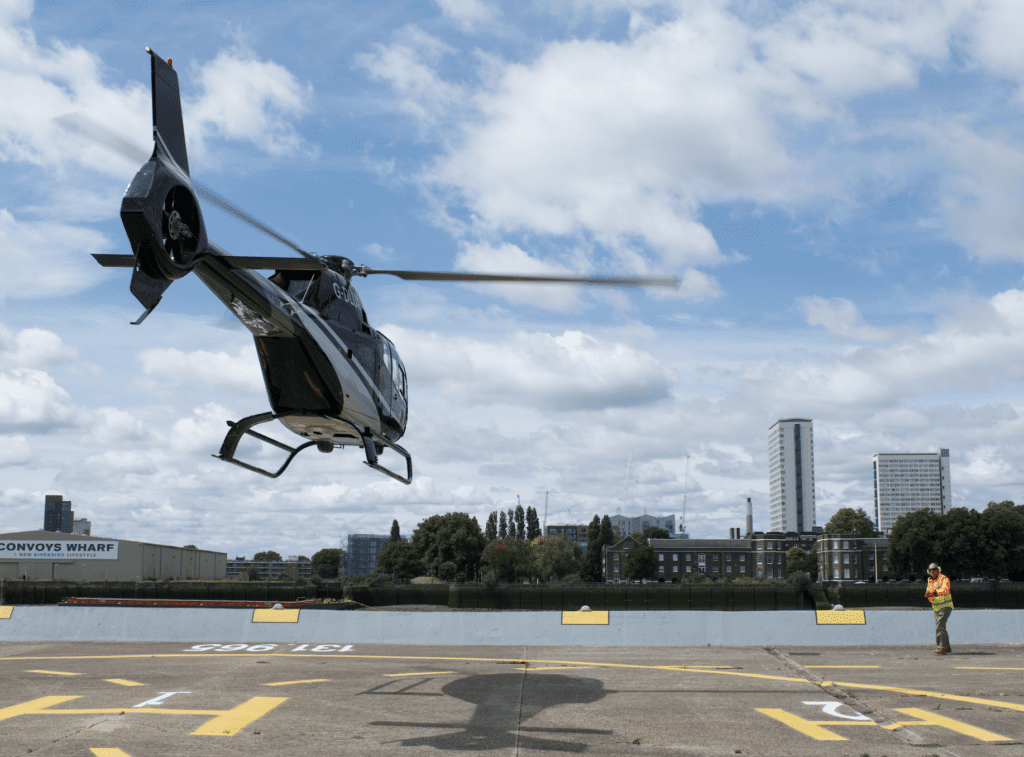 Skyports is continuing to work with its partners Wisk Aero and AirAsia on research related to advanced air mobility infrastructure and operations. Skyports is also planning to launch its vertiport testbed site in Paris in November. (Photo: Skyports)

Skyports, a UK-based vertiport designer and developer, shared updates on its research projects and partnerships with AirAsia and Wisk in emailed statements to Avionics International. The continuing collaboration between Skyports and electric vertical take-off and landing (eVTOL) aircraft developer Wisk Aero is currently focused on flight and vertiport resource coordination, according to a company spokesperson. Skyports is also working with AirAsia and other partners to initiate conversations with regulators in Malaysia.

The partnership between Skyports and Wisk, announced in April, was the first to connect an autonomous eVTOL developer and a vertiport developer-operator in the U.S. The companies released a concept of operations listing requirements for safe and autonomous eVTOL operations and corresponding infrastructure. The representative from Skyports noted that the ConOps was just the beginning of a long-term partnership with Wisk.

“We are now both actively contributing to research projects which will identify high priority data and communication interfaces to support AAM operations,” wrote the Skyports’ representative. “This current piece of work is an important stage of our efforts to create high level interface documentation.”

In the mid- to long-term, they added, Wisk and Skyports will “work on complex aspects of aircraft and airfield integration, electrification concepts, and more.” 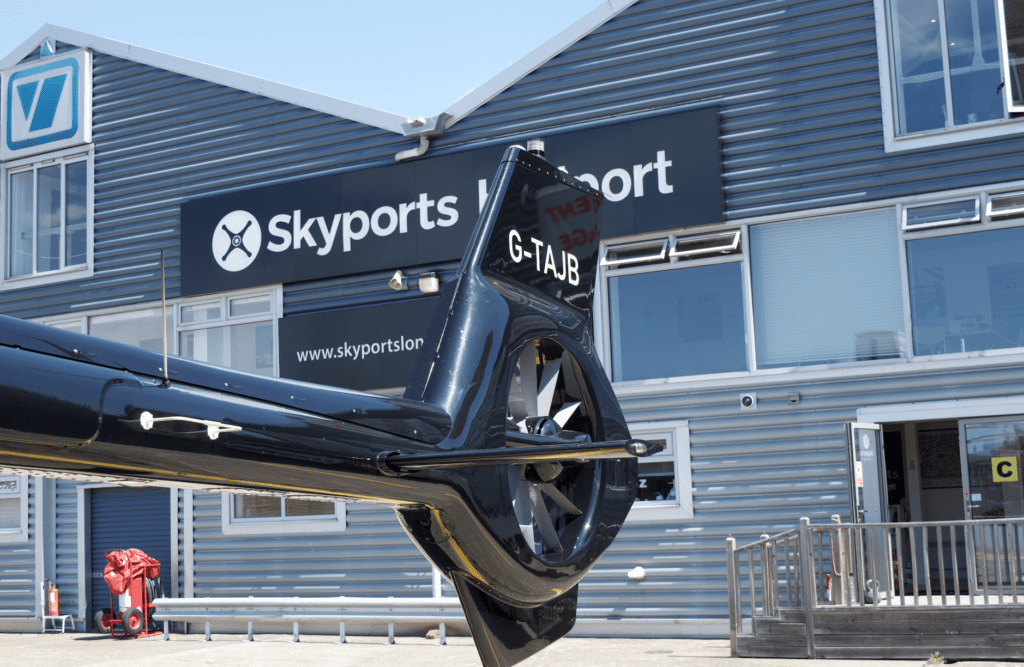 Skyports announced the acquisition of a heliport in London in January. The company’s representative explained that although commercial operations for advanced air mobility are not expected to begin until 2024, Skyports is experimenting with and verifying vertiport-related technology concepts using the London heliport. “We have currently deployed a majority of our technology baseline to the heliport and are commencing testing in an operational environment,” they stated.

AirAsia signed a letter of intent with Skyports in late July with the goal of deploying air taxi infrastructure in Malaysia. The letter of intent includes a year-long partnership between the two companies to perform feasibility studies on deploying vertiports in the country. The early stages of the partnership have seen Skyports focus its efforts “on initiating conversations with the country’s regulators and relevant aviation bodies,” the representative shared.

“In tandem with this, we are working closely with our partners to gather critical knowledge and input to form the foundation of the study. We look forward to sharing the outputs and results with industry and media as soon as possible.” 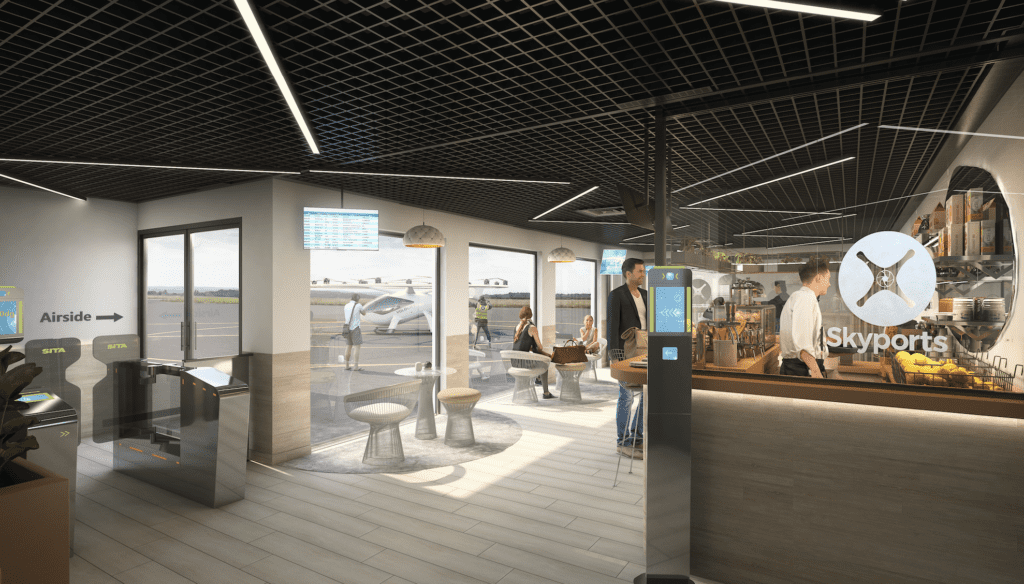 A rendering of the interior of the Cergy-Pointoise vertiport facility (Photo: Skyports)

In late 2021, Skyports announced plans to establish the first commercial vertiport in Europe. It will initially be used as a technology testbed, and will be built and operated at Groupe ADP’s Cergy-Pontoise Airfield in Paris. Practical completion of the site is scheduled for September 16, according to Skyports’ spokesperson.

Systems integration and two months of extensive testing of the vertiport will follow, and the company expects the launch of the site to occur in early November. As the representative from Skyports explained, “the testbed is vehicle agnostic and will facilitate all leading eVTOL OEMs to test and demonstrate aircraft capabilities in a live environment. Volocopter will be one of the earliest eVTOL companies to bring their vehicle to site.”

Other eVTOL developers, including Vertical Aerospace, Joby, Eve Air Mobility, and Airbus, are also part of the program. 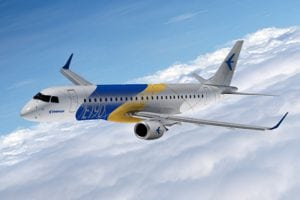 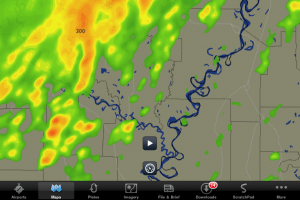 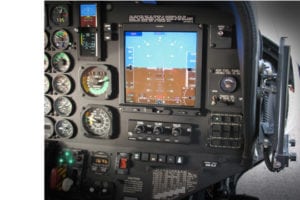