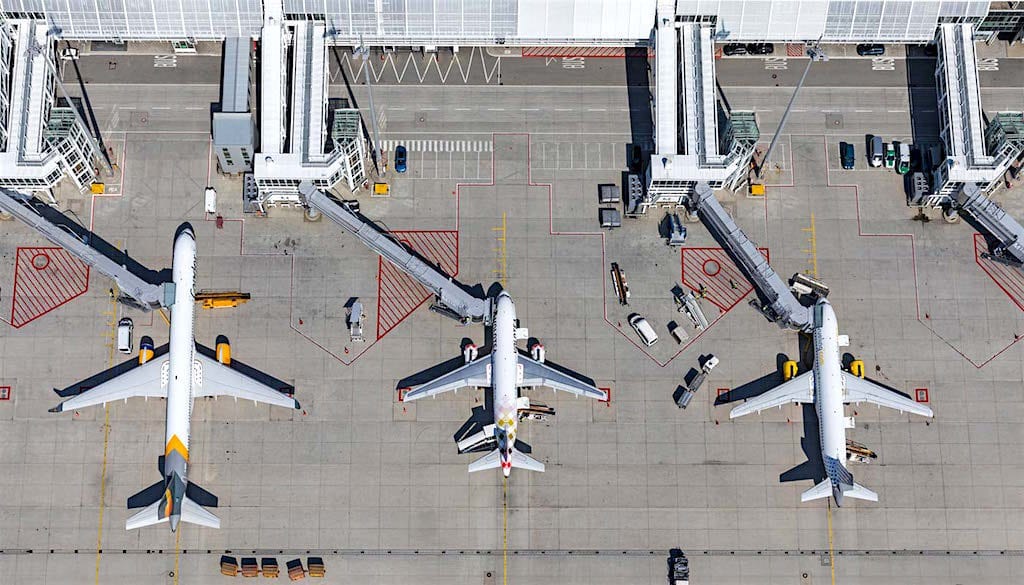 The largest commercial airlines in the U.S. and Europe are undergoing financial, operational and organizational measures in reaction to the outbreak of the novel coronavirus, as the aviation industry deals with the most unprecedented occurrence it has ever faced.

“On March 5th we estimated that industry revenues could take a hit of up to $113 billion as a result of what we thought then would be a worst-case scenario. We could not have foreseen the developments of the last days with massive restrictions on travel being put in place…and with no clear understanding how long they will remain in effect,” Alexandre de Juniac, CEO of the International Air Transport Associated (IATA) said in a statement published by the organization March 17.

Brian Pearce, IATA’s chief economist, released an online COVID-19 Airlines Liquidity Crisis presentation featuring a regional breakdown of the projected loss of revenue that is expected to occur as a result of travel restrictions all but halting international and domestic flying.

Here, we provide a look at the latest flight operations updates on how airlines are reacting to the outbreak in the United States and Europe. As more information becomes available, we will look to cover the impact to other regions in upcoming articles.

According to a statement published by Airlines 4 America (A4A) on March 16, the number of cancelled flights is now outpacing new bookings of flights in the U.S., with the organization saying that the “current economic environment is simply not sustainable.” The group is suggesting to U.S. lawmakers there is a need for a $58 billion bailout plan for U.S. airlines.

“This is worse than 9/11,” said Treasury Secretary Steve Mnuchin on Tuesday. “For the airline industry, they have almost ground to a halt.”

The U.S. Department of Treasury has said that it is working on a plan to provide relief and stimulus payments for the airline industry, although no details on what that plan might look like have been released. 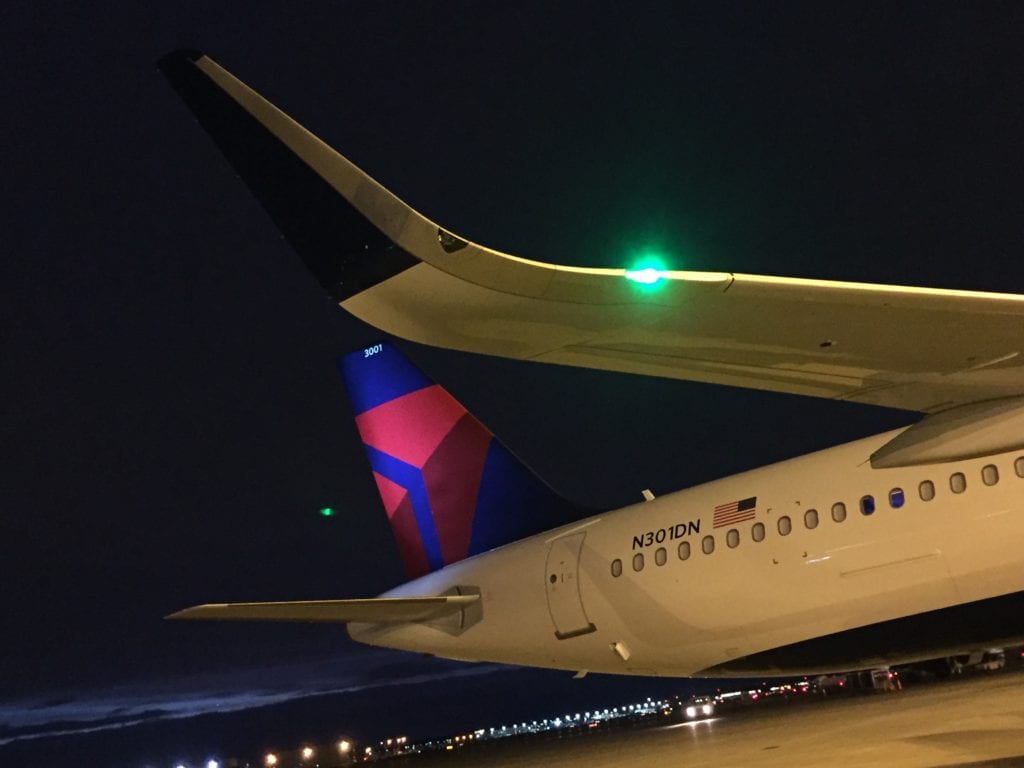 Delta is grounding more than 600 aircraft, half of its operational fleet, amid the COVID-19 outbreak's impact on travel restrictions. Photo: Delta Air Lines

Actions taken by Delta Air Lines on Wednesday, March 18 provided a glimpse at how bad the COVID-19 crisis is slamming the commercial aviation industry. The international carrier’s chief executive, Ed Bastian, said in a statement published to the Delta website that the airline will take a $2 billion loss for the month of March and has decided to ground half of its active fleet, more than 600 airplanes.

Delta is reducing its international flying by 70 percent and Bastian outlined a plan to achieve more than $4 billion in cash savings in the second quarter through a number of cost reduction initiatives, including a 50 percent pay cut to all officers and another 25 percent cut to directors and managing directors.

Bastian and all of Delta’s board of directors have also foregone their salaries for the next six months.

“We are having constructive discussions with the White House and Congress, and remain optimistic that our industry will receive support to help address this crisis. That said, we have to continue to take all necessary self-help measures. Cash preservation remains our top financial priority right now. Making swift decisions now to reduce the losses and preserve cash will provide us the resources to rebound from the other side of this crisis and protect Delta's future,” Bastian said.

“We are deferring nearly all of our capital spending, including all new aircraft deliveries, until we have better clarity on the duration and severity of the situation.”

Between March 16 and May 6, American plans on reducing its overall international capacity by 75 percent year over year.

The main updates from American have come in the form of a reduction to flight operations, with no plans for grounding any airplanes. American has also stopped all flights to Asia Pacific region destinations, with the exception of three flights per week between Dallas Fort Worth and Narita, Tokyo. One daily flight between Miami and London will remain operational as well as short haul flights to “Canada, Mexico, Caribbean, Central America and certain markets in the northern part of South America.”

On March 10, American Airlines CEO Doug Parker remotely participated in a conference call presentation address that he was scheduled to give in person to the 2020 J.P. Morgan Industrials Conference and described the coronavirus’s impact as a “fluid situation.”

“The US airline industry will manage through this and we at American will lead the way, this current crisis is a test of the ability of our restructured industry to withstand the type of shock that we’ve never been able to withstand before. I know that American Airlines is positioned to pass that test, and I suspect the rest of the industry is as well,” Parker said.

In a message to employees published on its website, United CEO Oscar Munoz and President J. Scott Kirby said they were both cutting their salaries 100 percent and cut the salaries of all corporate officers by 50 percent. The carrier has also reduced its capacity by 50 percent for April and May, and expects that same level of cuts to extend into the summer travel period.

“Even with those cuts, we're expecting load factors to drop into the 20-30% range -- and that's if things don't get worse,” the two executives said.

Total international flying has been reduced by 85 percent at United, which will continue operating some daily flights including New York and Washington DC to London and San Francisco to Melbourne, Singapore and Tokyo among others.

Change fees have also been waived for all travel scheduled through April 30th at United.

The European Aviation Safety Agency (EASA) took its first European Union-wide operational measure to control the spread of COVID-19 in the region by publishing a new safety directive March 13 that mandates specific interior disinfecting and cleaning of aircraft. EASA further updated that safety directive on March 16 with a focus on aircraft flying from areas of Europe determined by the World Health Organization (WHO) to be at high risk for transmitting the novel coronavirus.

Amid the growing number of cancellations resulting from the spread of COVID-19, the European Commission on March 18 published interpretative guidelines on how provisions from from European Union passenger rights legislation, EU 261, are being applied in the context of the COVID-19 outbreak.

Groups representing European airlines including IATA and Airlines for Europe (A4E), issued statements in reaction to the new guidelines seeking more flexibility for providing refunds in the event of cancellations due to the pandemic.

“There was some limited help in the new guidelines. They recognized that cancellations caused by externally imposed measures (such as the flight bans) or because of the very low demand are to be considered as an extraordinary circumstance. This would mean that in most current cases compensation for cancellation will not apply. However, on the limitations on providing care and assistance due to COVID-19, and particularly the flexibility on refunds or vouchers, the Commission’s response is inadequate,” IATA said in a statement issued jointly with A4E. 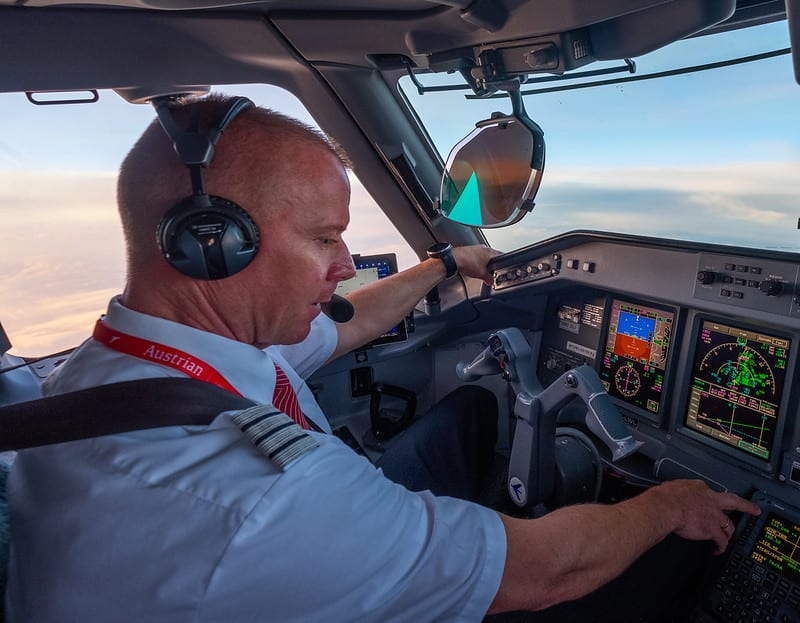 On March 19, Lufthansa Group published its 2019 year-end results, showing its overall group revenue increased by 2.5 percent to $39 billion - a year in which it had also invested more than $4 billion in improvements, most of which included purchasing new aircraft.

However, the results were published during a week where Lufthansa subsidiary carrier Austrian Airlines suspended all of its flight operations temporarily through March 28 and confirmed overall Lufthansa Group bookings were down by 50 percent during the first week of March compared to the same period last year.

“The longer this crisis lasts, the more likely it is that the future of aviation cannot be guaranteed without state aid. In view of the massive impact of the Corona crisis, today's publication of our results for the past financial year is unfortunately sidelined,” Carsten Spohr, chairman of the executive board for Deutsche Lufthansa said in a statement published by the airline.

Air France issued its latest operational update on March 19, which will include a reduction of international and domestic flight capacity by up to 90 percent that is expected to last two months. The state-backed carrier has also closed all of its ticketing offices located throughout Paris and at Charles De Gaulle airports, handling all customer inquiries online.

Passengers are being advised by Air France that they can postpone all tickets purchased prior to May 31 until November 30, and special fares are also being offered to French citizens abroad looking to return home.

The airline has also moved to cancel a total of 3,600 flights for the entire month of March.

“Please note that only citizens of the European Union, the Schengen area or the United Kingdom, and their families, are authorized to travel to France at this time,” the airline said on its website.

Bruno Le Maire, the finance minister for France, said Wednesday that the French government will consult with its Dutch counterpart prior to taking any action on financial support to Air France, which is a subsidiary of Air France KLM.

On March 16, IAG published a statement providing updates on the latest actions its taken in response to the COVID-19 outbreak, including suspending all flights to China, reducing capacity on all Asia Pacific routes and cancelling flights to, from and within Italy altogether.

“We have seen a substantial decline in bookings across our airlines and global network over the past few weeks and we expect demand to remain weak until well into the summer. We are therefore making significant reductions to our flying schedules. We will continue to monitor demand levels and we have the flexibility to make further cuts if necessary. We are also taking actions to reduce operating expenses and improve cash flow at each of our airlines,” Willie Walsh, CEO of IAG said in the statement published by the group.

Between April and May, IAG will reduce its overall capacity by 75 percent compared to the same period last year.