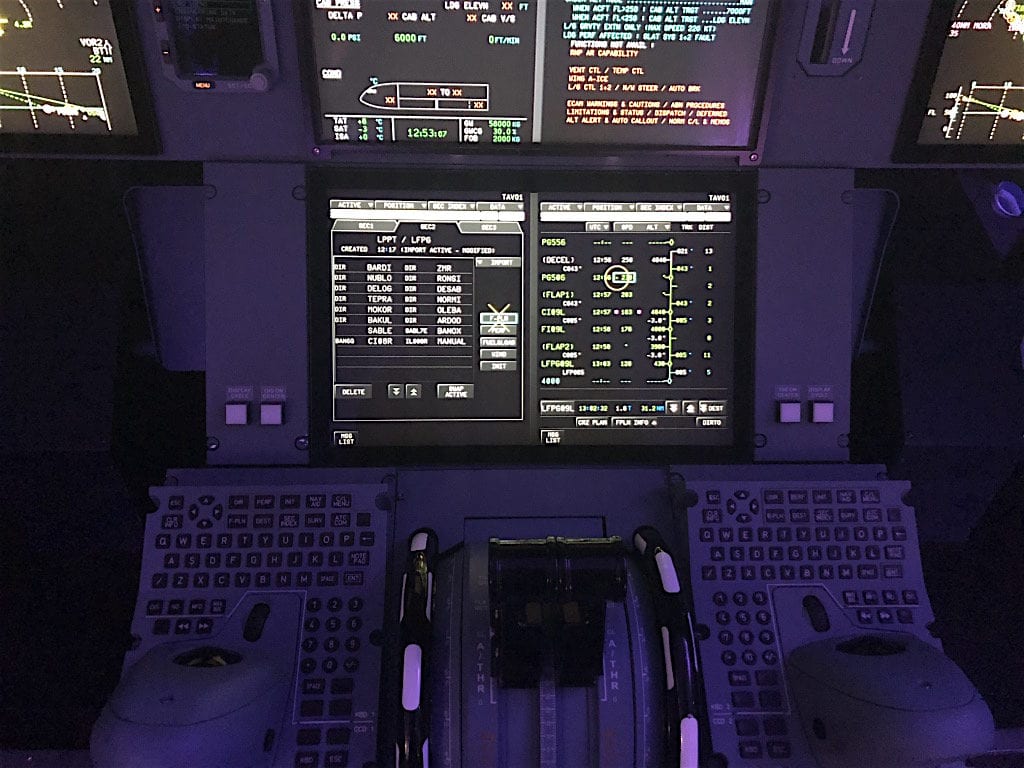 Thales provided details behind the development of its next generation flight management system, PureFlyt, during a briefing at its avionics headquarters in Toulouse, France. Pictured here is the current simulated interface for PureFlyt featured in an Airbus A350 mock cockpit within a Thales development lab.

TOULOUSE, France – Thales provided details about its next generation flight management system (FMS), PureFlyt, which executives and avionics engineers here at its avionics headquarters explained will be the world’s first FMS with open world connectivity embedded in its architecture and functionality.

Expected to enter into service by 2024, Thales’ avionics engineering team first started designing PureFlyt in 2015 and has already amassed 100 million actual flight hours using a new machine learning approach to testing its capabilities with real flight data, waypoints and airports. Peter Hitchcock, vice president of commercial avionics for Thales, told journalists PureFlyt will not only be capable of 4D trajectory operations, adding time to the three traditional spatial dimensions used for aircraft positioning updates, but will also be the first FMS capable of 5D trajectory. The next generation FMS will be constantly proposing an optimal flight path for pilots to follow that accounts for changes in an aircraft’s weight as it burns fuel along a given route.

“In the past, the flight management system used to require a dedicated computer," Hitchcock said. "With Pureflyt, now we've made such progress that we don't need it to run on a dedicated computer. We could run it alongside other systems on a shared computer using the concept of integrated modular avionics. We don't lose security or performance doing this, but we can probably save 20 kilos of weight on every flight by eliminating the dedicated computer and putting it in an IMA network."

A final design architecture has not yet been solidified by Thales’ engineering team, however Hitchcock and others behind the development of PureFlyt indicate that it will feature two dedicated computers for redundancy that are always checking each other for accuracy. The design team currently has the software and operating system for PureFlyt running on a mock Airbus A350 cockpit in a development lab where it is controlled through two touchscreen displays and synced with connected electronic flight bag (EFB) running the company's Aviobook flight optimization application.

Described by Thales as a “technological breakthrough,” a unique design element of PureFlyt is the embedded connected and processing aspects, which are capable of feeding all the various elements of the global air traffic ecosystem into an aircraft’s flight plan in real time.

Hitchcock explained that PureFlyt will be able to communicate dynamic real-time changes to an aircraft's flight path with air traffic controllers using traditional data link or airline operations center messaging. The FMS will enter service already featuring a concept being flown in its initial stages currently by EasyJet, which in July became the first European airline to start downlinking projected profiles to air traffic controllers at the Maastricht Upper Area Control Center (MUAC).

“At times of interruption the FMS is the critical computer on the plane, that’s what is telling the pilot how much energy he has on the plane, how fast he can turn, how much fuel is left, all of these calculations at a moment of change," Hitchcock said. "It is the source of critical performance calculations for an aircraft. PureFlyt taking this forward will perform these calculations in four dimensions, altitude, longitude latitude and time. It will also, through connectivity, share that information with other systems. So what we’re doing with PureFlyt is we’re eliminating the gap between the strategic EFB plan and the FMS plan, its now one plan in the same." 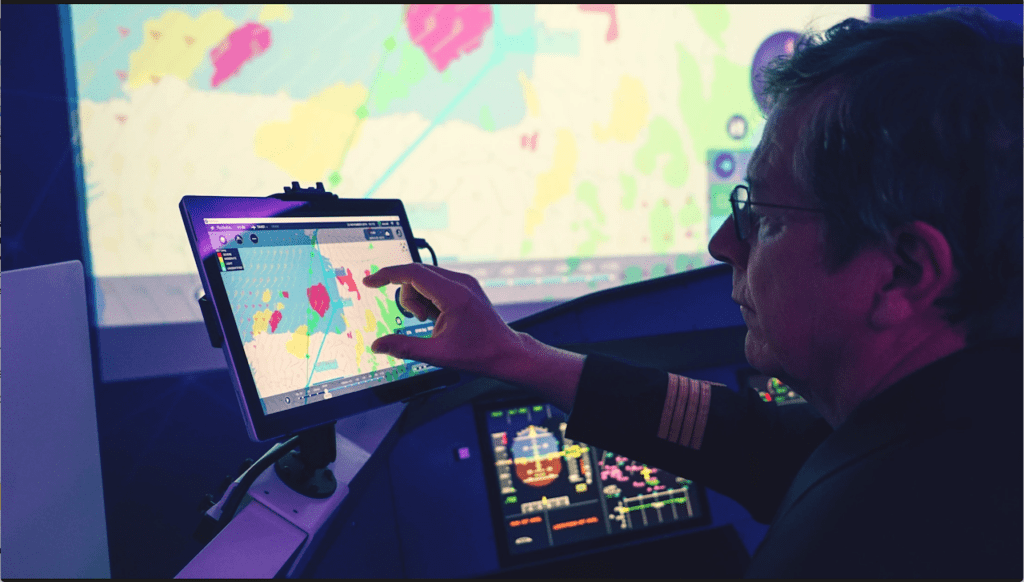 The unveiling of PureFlyt comes as other companies are also heavily invested in the scaling up concept of the connected FMS. Mike Ingram, vice president of cockpit systems at Honeywell Aerospace, told Avionics International during a visit to their facility earlier this year that the connected FMS is one of their “biggest investments.” GE Aviation and Avionica have also developed a two-way link between third party EFB applications and GE’s flight management computer featured on the Boeing 737.

However, those connected flight management computers are taking existing FMS technology and making them more capable of consuming data from EFB apps. Thales has emerged as the first company to develop a completely new FMS with this functionality embedded as the standard flagship feature.

On the testing side, Hitchcock said the technological maturity of PureFlyt has made significant advances due to the way they’re able to test the system now. 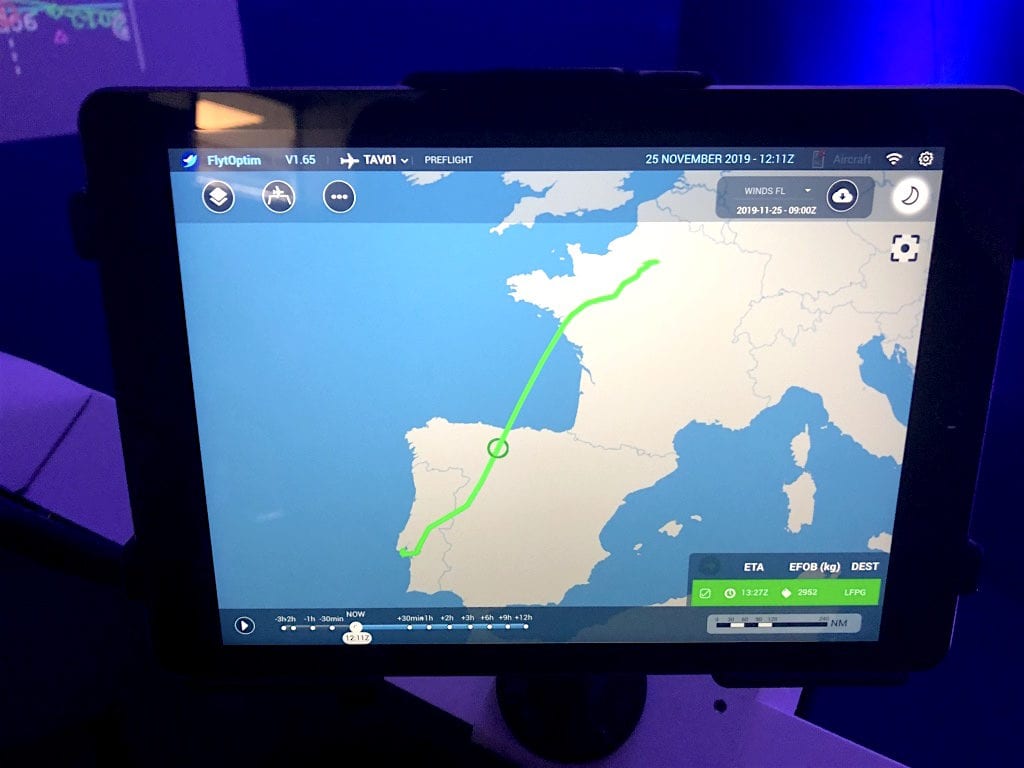 Here's what the EFB linked to the Pureflyt FMS shows during a simulated flight in the Thales development lab.

“In the past 20 years, we’ve racked up 100 million flight hours on our FMSs, we’re now talking a matter of days to get the same through using machine learning," Hitchcock said. "We designed the FMS to respond to an incredibly intense machine to machine interrogation and really check everything. That means we don’t just test some of the data we can test real data and we’re also checking this in five dimensions now, in addition to the fourth dimension I mentioned of time, the fifth dimension is weight because aircraft behave differently at different weights.”

The first public unveiling of PureFlyt simulated flight between Lisbon, Portugal and Paris, France was provided using PureFlyt in an A350 cockpit. Inside the lab where the new FMS is being developed, Didier Poisson, a test pilot for the company, showed how the system is capable of using the strategic view of a flight plan generated by an tablet flight planning application to re-route the aircraft around areas of severe weather using real-time information. 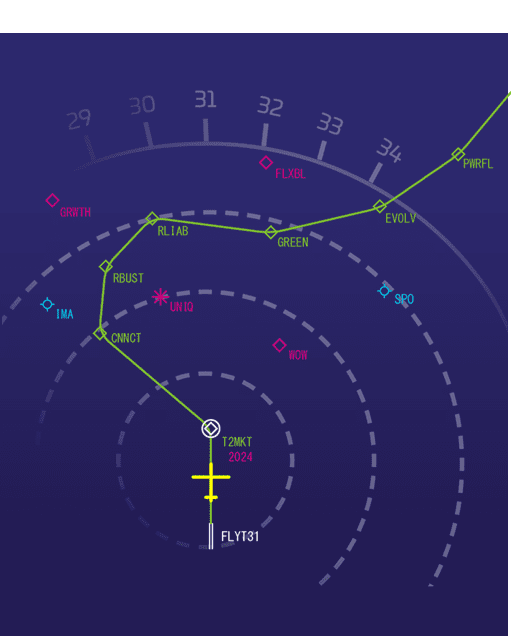 If a pilot manually diverts the aircraft from its original flight plan, Pureflyt's software keeps generating the most optimal route in a waypoint to waypoint visual representation as shown here. Photo: Thales

He also explained how Thales is using a dedicated server onboard the aircraft to check the accuracy and authenticity of any data received by flight management computer. Pilots will also have control over data received by PureFlyt.

It remains to be seen, however, how connected PureFlyt will ultimately be when it enters into service. Thales officials declined to comment on whether a router or modem would be embedded into the new FMS, which would enable it to connect to effectively any “open world” connectivity network, such as the air to ground or satellite-based in-flight connectivity services offered by companies such as Gogo, SmartSky or Viasat.

“I don’t see that happening in the first phase,” Wiehelen said, when asked whether PureFlyt will use cabin connectivity systems. “I would say more from certified satcom, from the likes of Inmarsat or Iridium. Simply because the environment is conservative and it needs to be certified.”

While most of the functionality of PureFlyt demonstrated during the unveiling discussed specific airline applications and usage, the company is developing the system to be ready for variants on military air transport aircraft, helicopters and even to be available as a retrofit.

Jean-Paul Ebanga, vice president of flight avionics for Thales, said the development of PureFlyt was also created with the millennial generation of pilots that will become the majority of those in commercial airliner cockpits over the next 20 to 30 years. Ebanga believes PureFlyt will start a new era in connected cockpit avionics.

“In some ways it's a new world of flying in the making, and we are currently providing the enabler, the digital cockpit, to make this world become a reality for future pilots,” Ebanga said. “A paradigm shift in onboard cockpit electronics is taking place in the connected airspace and PureFlyt is at the forefront of this digital new age, leading the next generation of flight management system that truly makes the aircraft a node of connectivity.” 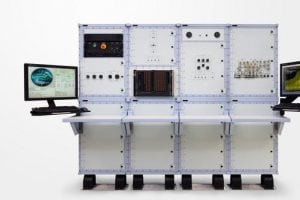