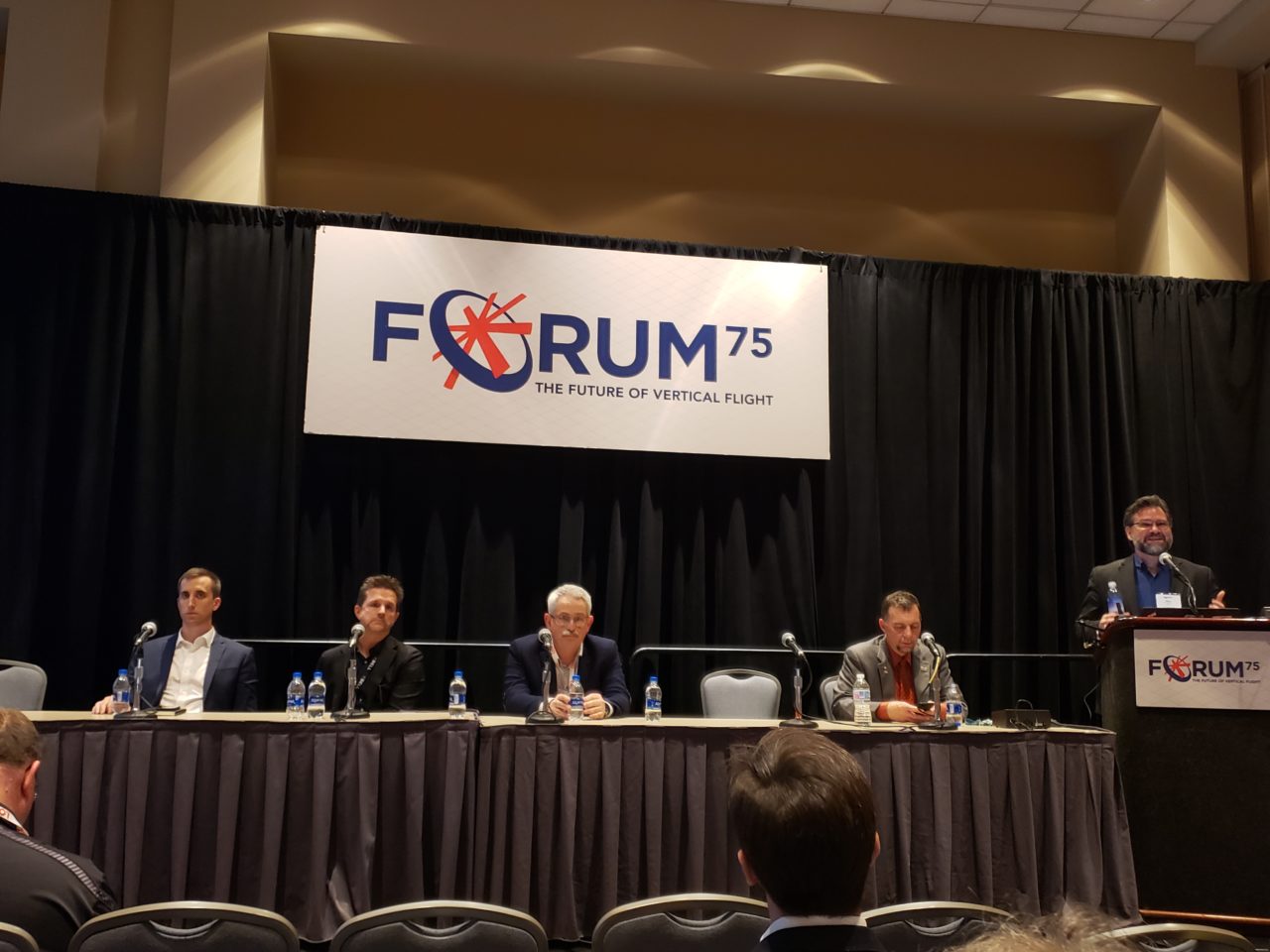 Despite Uber's notoriously ambitious schedule, Director of Aviation Engineering Mark Moore says the company does not need any miracles to get its urban air mobility (UAM) business off the ground — just hard work.

There are, however, a lot of very specific things the rideshare giant is looking for in partners. Speaking at the Vertical Flight Society's annual forum in Philadelphia, Moore described Uber as "the conductor of a symphony" whose job it is to bring everyone together and make sure they do their parts in concert. That means demanding a lot from key positions, like first cellist — err, manufacturer.

"It's really important to understand that some of [the current electric vertical-takeoff-and-landing concepts] don't make sense. Let's be honest," he said.

To "make sense" for Uber's UAM mission, a proposal has to meet certain thresholds in feasibility, performance and cost, and they have to be realistic now.

"Direct operating cost tells all," Moore said. "If you can't show an economically feasible business case that can get to scale, then certainly we’re not interested."

A major area of focus for Uber is batteries. Electric power replacing fuel and associated costs is a significant enabler to the UAM business model, and the company hired former Tesla battery lead Celina Mikolajczak to head up its efforts in that realm.

"Sure, there's going to be really great battery advances in the future; I wouldn’t depend on any of them in the next 5 years," Moore said. "If this cell is not already in production and you’re not getting lab cells that have a clear path to volume production, I would suggest not even messing with that."

Uber wants a battery pack that can provide 185 watt-hours per kg with a peak C-rate (the rate at which a battery discharges its power relative to its maximum capacity) of 3.5C and a continuous rate of 1.2C, which Moore is confident is possible — he said batteries should hit 220 watt-hours per kg by 2022, but 185 is enough to enable Uber's mission.

“What's more important to us than going 60 miles is that you can go 25 miles and do that repeatedly with just 5-minute intervals [to partially recharge between trips] and you don’t go under that 35% capacity line," Moore said, pointing out that the majority of urban missions are somewhere between 20 and 25 miles.

And, while maintaining that capacity, the battery needs to also be cost-effective. Uber is looking for 1500-plus effective cycles of the battery and a battery pack cost that amortizes over use to a firm limit of $100 per flight hour. Uber's research shows that as little as half that is possible; less, figuring in the sale price of retired batteries as salvage.

Key in getting the most out of batteries will be fleet management. "It's why commercial aviation is the gold standard," Moore said. Having constant view over the entire fleet of vehicles and the ability to remove one from service rather than operate it in unideal circumstances cost-efficient use, which also attracts top battery-makers.

Uber has also found that a vehicle will need to have a low disc-loading during hover: below 12 lbs./ft.² for open rotors and below 25 lbs./ft.²  — newly announced electric five-seater Lilium, he said, is way over that and he saw no way for it to work.

The lift-to-drag ratio during cruise Uber wants is 12 at 150 mph; that way, Uber can reach the 60 mph range it has set as a goal.

On the noise front, Uber is very concerned about gaining public acceptance through quiet operation — Moore called noise reduction "the doorway to the market... If there were quiet helicopters, we would be doing [operations with] those right now," he said. Uber wants vehicles to stay at or below 15 decibels on approach, a figure dwarfed by any helicopter. 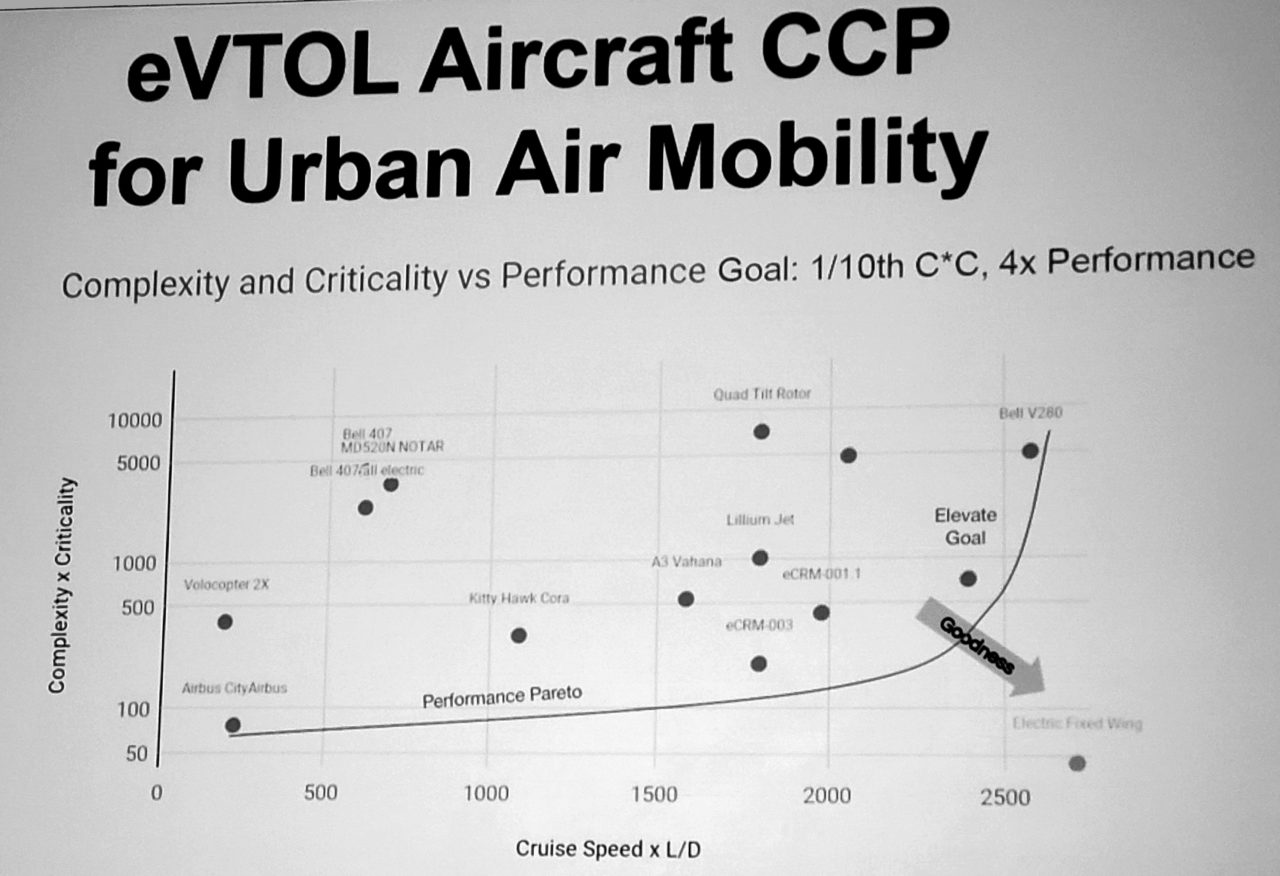 Uber's chart of some VTOL projects by its complexity-to-performance metric. (Nick Zazulia/Uber)

A final metric by which Uber evaluates all vehicles it might consider is a formula of sorts: 1/10 c*c2, where C is complexity and C2 is criticality, charted against quadruple the performance of a helicopter, defined as cruise speed multiplied by lift-to-drag ratio. (See image.)

What that means is Uber wants the most bang for its buck with the least complexity and fewest possible safety-critical systems. The ideal spot, well under the curve, is an electric airplane — it's fast and relatively simple, relying on only things such as the electric motor  — but matching that with an eVTOL aircraft that provides the desired capabilities isn't realistic. But, the more complex and safety-critical (read: expensive to replace) parts and systems there are, the more maintenance and expense it takes to keep the aircraft in service. A reference point far, far above the curve, underperforming in both metrics, is the Bell 407GXi, which Moore called an excellent helicopter — but with an operating cost of $1,120 per flight hour.

Uber wants a fraction of that number, and it wants it on a schedule that would dovetail with demos next year and a 2023 operational launch, starting with 5 air taxis and working up to 50, before exploding to the dreamed hundreds or thousands.

It's a big ask, but Uber thinks it's more realistic than miraculous.