On the second day of the world's largest satellite industry show this year, Satellite 2018, connectivity service providers, an airline pilot with a radio show and an antenna manufacturing company reset the pulse of the global aircraft in-flight internet industry with a major discussion on cost structures, business models, the cost of antennas, hybrid networks, electronically steered antennas and next-generation airplane connectivity.

During a panel on in-flight connectivity, executives from some of the world's largest in-flight connectivity service providers providers — Gogo, Global Eagle Entertainment and Panasonic — all addressed passenger complaints about unreliable connectivity and the need to continue to improve speeds, expand bandwidth and establish a business model that is profitable for operators and service and equipment providers.

"It's starting to hit the C Suite now," Mike Pigott, VP of Global Eagle Entertainment, told the audience in response to a question about the backlash the company has received from passengers using its internet service on board Southwest Airlines aircraft.

"The C Suite is seeing the impact from social media and the feedback from customers,  and now they’re starting to see that impact their net promoter score and that is really driving performance out of all us," said Pigott.

A simple search on Twitter for "in-flight internet" and the Twitter handles of various airline accounts shows exactly what Pigott was responding to. Some examples: The beginning of the panel discussion focused heavily on the need for in-flight internet service providers to manage the expectations of passengers, who Pigott noted have an ever-increasing need for bandwidth and speed. Those same passengers, he said, also increasingly are demanding that the in-flight internet be provided free or at least at an affordable price.

That is difficult to do for airlines, though, considering the cost they must pay to provide the bandwidth for the service itself and equip their aircraft with antennas, modems, servers, wireless access points and other equipment that enables passenger access to the internet. That is why in today's global commercial airline environment, carriers are using different business models that adjust all the time.

The cost passengers pay for access to the internet has varied in terms of the reliability and bandwidth of the network with which the airline is equipped. JetBlue, for example, has for several years been providing free access to a tiered level of internet service for passengers, with access to a speedier, stream-worthy connection available for a higher price.

What also continues to evolve is the blend of different options that providers are giving to airlines and private jet charter companies. Panasonic and Global Eagle, for example, provide both internet service and content to operators. But Pigott said even the way that they look at the provision of content and the internet service itself is changing.

"Is the internet content; is the content internet? We call it 'contentivity,'" said Pigott, referring to the way Global Eagle is now viewing the provision of a combination of in-flight entertainment content and internet.

Another major theme that emerged during the discussion was that even the service providers, such as Gogo, are becoming less and less concerned with trying to prove to airlines that Ku band is better than Ka band, or air-to-ground is better than satellite.

Instead, Anand Chari, CTO for Gogo, said that his company is technologically agnostic and that it is taking very seriously passenger complaints about its network performance.

"There are three words that summarize Gogo’s position," said Chari. "We’re multi-band — that’s Ku, Ka and anything else, L band included. Multi-constellation — that's [low earth orbit (LEO)], [medium earth orbit (MEO)], [geostationary earth orbit (GEO)], And multi-mode, satellite and air-to-ground. We think there is room for all of this over the next five years."

Chari stressed that Gogo is technologically agnostic and is doing everything within its power to create an at-home internet experience for airborne passengers. Gogo is heavily investing in research and development around future antenna technologies. That includes an electronically steered antenna with no moving parts operating within the 2.4 GHz band. Gogo is also preparing to deploy the next generation of its air-to-ground service in North America.

"The most bitz per hertz: that’s just part of the solution for getting more bandwidth on the satellites. But when you multiply that by a larger number from the antenna and from the modem in terms of bits per hertz, we see an open playing field," said Bill Milroy, CTO at ThinKom.

Despite the challenges of providing in-flight internet service to airlines whose routes frequently position closer to the equator, such as those in the Latin American region, the executives representing both Gogo and Panasonic Avionics said they're seeing no outages within their networks operating in Latin American airspace.

Saul Reza Arcelus, writer and radio host for EnElAire Radio and pilot for Aeromexico, was also on the panel. Arcelus has not seen major challenges in using in-flight internet in the region either.

"We can use connectivity to download operations performance data, in ways that we could not do before. We can use very important tools, like downloading weather images that can help us make the flight more efficient and reliable if we’re enabled access to use the connection," said Arcelus.

Still, all of the service providers on stage admitted that they have not yet established an in-home internet experience in the sky for passengers, but they're working on it, according to Todd Hill, senior director of global satellite capacity planning for Panasonic.

“We’re always trying to get like the coffee shop, you don’t quite get your home environment at the coffee shop, a little bit difficult in the middle of the ocean moving along at 700 mph. But we’re trying to meet the couch,” said Hill. 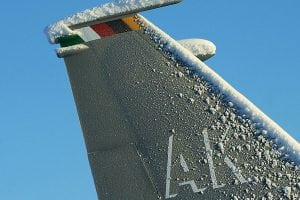 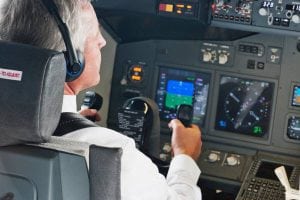