[Avionics Today 09-09-2015] Tim Mahoney, president and CEO of Honeywell Aerospace, is looking at opportunities in software and connectivity to drive revenues as Inmarsat’s Global Xpress (GX) satellite constellation nears completion. Honeywell is an exclusive distributor for business and general aviation for Inmarsat’s high-speed satellite broadband GX Aviation solution, which the satellite operator expects to enter global service at the end of this year. For Mahoney, this window into Ka-band connectivity services allows Honeywell to capitalize on a number of segments of the aviation connectivity business, for which the company has been gearing up for some time.

“Equipment is going to be delivered in the fourth quarter of this year to airlines. So there have been airlines and business aviation customers who have selected going to the GX. We see ourselves already in the environment because we’re already selling equipment but we’re moving into the broader share of that market in 2016,” he said at the Gabelli 21st Annual Aircraft Supplier Conference in New York.

Speaking at the conference earlier today, Mahoney laid out Honeywell’s multi-tiered approach to connectivity, which looks to capitalize on four areas of the rapidly developing In-Flight Connectivity (IFC) market.

“The first tier starts with equipage, so think about equipment that is on an aircraft; whether it’s business and general aviation, air transport or defense, at the end of the day there is equipment that will be installed on the aircraft that will enable a much larger pipe and bandwidth on that aircraft. That type of equipage is antennas, routers and electronic devices that are inside the aircraft,” said Mahoney. Honeywell has been preparing its technology for Inmarsat’s satellite-based IFC network ever since finalizing the Critical Design Review (CDR) for GX Aviation aircraft avionics in February 2014.

The second tier, according to Mahoney, is within the realm of mobile applications, for tablets or smart phones. These aim to provide real-time flight planning or weather information to pilots in the cockpit on both certified and uncertified equipment.

“Relative to us being able to provide applications, this is opportunistic; this is about us being able to understand what those customers’ needs are,” said Mahoney. “The market potential and area of interest in that area is $2 billion.”

Third, Mahoney expects data analytics provided through connectivity to impact  flight operations and predictability, an area of the market Honeywell estimates to be worth about $1.2 billion.

Within the realm of connectivity, the company is also hoping to capitalize on software applications, according to the CEO, who is looking to use the information collected from equipment on the aircraft, all of which has a digital footprint, in order to drive cost efficiencies.

“In terms of business aviation, … typically we don’t think about an engine having a digital footprint, but every engine has either a control system or a [Full Authority Digital Engine Control] FADEC and it has information of significant value. Think about that information as knowledge. So we have the knowledge around all of those connected auxiliary power units,” said Mahoney. “The first element to this is the install base and the knowledge that we can liberate or unleash out of that system and the fact that we have this domain knowledge of those systems or subsystems.

“The market needs to operate very efficiently,” said Mahoney. “The wireless construct should be able to be more than efficient such that it subsidizes or it pays for itself relative to the owner, operator or the airlines. What is experienced in the cabin is something where the airlines or that organization would actually make money on. We believe there is a very good business case for the connectivity driving a high degree of efficiency in the sub systems on the aircraft such that it pays for itself.” 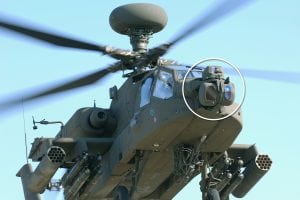