Raytheon is upgrading the Integrated Waveform (IV) software in its AN/ARC-231 airborne radio terminals, a move that will triple the satellite capacity, the company said.

Prior to the software upgrade, this form of radio communications had limited capacity, causing communication delays in theater. The government's prior acceptance of the Phase 1 IW upgrade for its ARC-231 radios enabled Raytheon to implement this satcom enhancement, available to all U.S. Army Aviation aircraft and various U.S. Air Force aircraft.

The present Ultra High Frequency (UHF) satellite system is reaching the end of its lifecycle. In order to bridge the gap between the current system and the replacement system, the Defense Information Systems Agency (DISA) has worked with Raytheon and other radio vendors in the development and rapid fielding of IW as the UHF SATCOM solution. DISA field tested the upgrade prior to its release. As a result of these test events, along with extensive regression testing conducted by the Joint Interoperability Test Command, the ARC-231 radio received approval through the Joint Chiefs of Staff Office for the IW software fielding within the Department of Defense. Raytheon has since incorporated this upgrade into its current production radio.

New production radios as well as the more than 5,000 currently fielded ARC-231 radios can receive the IW enhancement via a software upgrade that can be implemented in theater. This approach will have minimal impact on the deployed radios and will require minimal operator intervention, thus increasing mission capabilities. The upgrade will provide an increase of several hundred networks for ARC-231 SATCOM users. 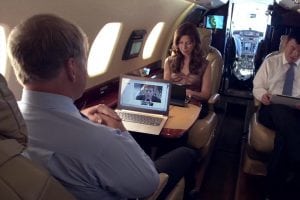