[Avionics Today 06-11-2015] As airlines grapple with ways to draw the most value from passenger connectivity, a fully free service is likely to stay out of reach for some time. In-Flight Connectivity (IFC) has turned into a boon for many satellite operators, along with other parts of the industry, but service providers cited the cost in Mbps as a reason passenger IFC may never be completely free. “The closer you are to getting down to about a penny per megabyte, the more you can offer for free. Anything north of that I think it is going to be very difficult for airlines to make a business case to offer it for free. It’s really more of a cost and bandwidth equation and, frankly, today we are just not there yet as an industry,” Duc Huy Tran, VP of strategy and marketing of In Flight Entertainment and Connectivity (IFEC) at Thales Live TV, said June 10 at the Global Connected Aircraft Summit.

Aditya Chatterjee, CTO and SVP of engineering at Global Eagle Entertainment (GEE), estimated that the cost per megabyte has come down from roughly $0.7 each to about $0.2 to $0.3 today. Panelists largely agreed that, while predicting business models for IFC is nearly impossible, services are likely to split between high bandwidth and low bandwidth, with airlines setting up pay walls around services such as video in order to optimize their use of capacity from satellites and Air-to-Ground (ATG) networks.

“I think we can provide value added services, whether it’s streaming or other things for the right price to those who want to do more. I believe that’s the way industry will go for a while. We will see some offering it for free for limited amounts of data and then for a more rich experience there will be a pay-per-use kind of model,” said Greg Montevideo, senior director of global communications services at Panasonic Avionics.

Panelists pointed to equipment available as the key variable for whether or not the “free” cost equation balances out. Many IFC service providers and satellite operators are teaming up with antenna manufacturers and other companies to provide tailored solutions for airlines. The past 12 months alone have seen numerous linkups — Panasonic partnered with Boeing, GEE with QEST, Inmarsat with Kymeta and Intelsat with Phasor — all to design and produce antennas optimized for IFC. And several satellite operators at the GCA Summit stated publically that demand from the aeronautical vertical is increasingly influencing as they design next generation spacecraft.

“The answer in the long run for free or charged is really going to be the technology that we can bring and the efficiency of that technology,” explained Richard Nordstron, senior director, global marketing air transport cabin solutions at Rockwell Collins. “That’s where we are focusing right now, especially with new types of antennas and new constellations that are going up. We’re not there, but we are heading in that direction.”

David Gelerman, CEO of Advantech Wireless, highlighted the increasing importance of software as a key differentiator that will likely have a major impact on IFC satellite technology in the near future.

Panelists agreed that, like guessing IFC business plans, designing truly “future-proof” technology is also not an exact science. Chatterjee said future-proofing has to be integral for any service provider, given the demanding amount of time it takes to fit aircraft with IFC systems, but admitted it is nearly impossible to satisfy the unknown demands five to 10 years out. Still, with IFC adoption growing at a fast clip, even if the technology needs of future years remain out in the offing of today’s Research and Development (R&D) efforts, service providers are confident IFC equipment will be in high demand.

“One thing is certain: I think within the next five years connectivity is going to be universal,” said Tran. 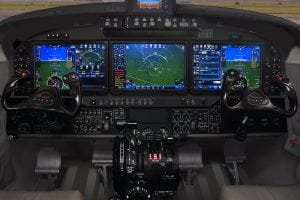