For most passengers, in-flight entertainment has morphed from looking out the window to watching on-demand movies, playing video games or connecting to the Internet. The shift in in-flight behavior is prompting many airlines and business jet operators to offer in-flight Web access, and it is pushing antenna manufacturers and broadband service providers to respond in kind with smaller and more efficient systems critical to making and maintaining the connections.

The move to broadband got another lift in 2010 when Lufthansa restarted its FlyNet high-speed Internet service on select North Atlantic routes, becoming the first carrier to offer broadband Internet access on intercontinental routes. The service will be rolled out on nearly the entire Lufthansa intercontinental network by the end of 2011.

Halted in 2006 when its service provider, Connexion by Boeing, discontinued operations because of disappointing market uptake, Lufthansa FlyNet is back in business, a Ku-band system supported by equipment from Panasonic Avionics Corp., of Lake Forest, Calif.

The demand for broadband for both air transport and business aviation “is spreading out to just about everyone now,” said Norm Pickering, senior marketing manager for satellite communications with Esterline CMC Electronics, of Ottawa. “It is almost a surprise to us when we see somebody order our non-Swiftbroadband antenna at the OEM level.”

The enabler behind these in-flight connectivity services is the antenna. Increasingly, aircraft manufacturers are requiring multi-purpose and smaller antennas that provide more bandwidth and more power for their customers.

“Antenna costs are probably the most significant component” of the price of installing satellite systems, said Anand Chari, vice president of engineering at Aircell, of Itasca, Ill.

Aircell has managed to keep the cost of its service down by using two small blade antennas from Comant Industries, a Cobham subsidiary based in Fullerton, Calif., to establish connectivity. Unlike top-mounted satcom antennas, these are installed on the aircraft belly. Each weighs about 1.25 pounds and “has a blade structure with an extremely small footprint it is the size of your palm and has very low drag,” Chari said.

Because of the antenna’s design, “we are taking advantage of the horizontal and vertical polarization, called the cross polarization isolation, (which) gives you less interference and better signal quality communicating with the ground,” he said.

The company said it plans to further boost the quality of its operations by switching from an omnidirectional to directional antennas for the service.

Installation downtime has been minimized. “We install everything, including the antenna and all the components and cabling … overnight,” Chari said. “After the last flight of the day the plane goes to the hangar. It takes off for the next morning flight with our system turned on.”

Aircell, which offers an Iridium connection for general aviation operators, is now “actively working” on an international system for the air transport market, which means it will have to choose a satellite connection and antenna, Chari said.

Business jet operators are adding broadband antennas to aircraft to gain a competitive advantage and give their customers added capabilities, while airlines are seeking to provide a better “passenger experience” to attract customers, said Fred Cahill, vice president of Cobham Antenna Systems. Cobham manufactures a family of small, phased array Inmarsat antennas, including its Satcom HGA-7001, a fuselage-mounted, phased-array, high-gain SwiftBroadband antenna. Cahill said a key market trend is the development of small, multifunction antennas, such its Satcom SB200, which combines GPS and Inmarsat antenna in the same package and, therefore, does not require any navigational inputs from other equipment on board.

As in most other markets, the economy dampened the antenna business in 2010.

“It was a pretty good year but not the mass rebound that I think people were praying for,” said Tim Best, product manager for aero antennas and radomes with EMS Aviation, of Ottawa.

However, there was more interest and optimism as the year progressed, with some customers not just “tire kicking” but putting solid plans in place for programs in 2011 and 2012, Best said.

At the National Business Aviation Association (NBAA) conference in Atlanta last October, EMS Aviation rolled out the first of its Aspire family of Iridium and Inmarsat voice and data systems, intended for small and medium-sized business aircraft. The modular product line includes low-, intermediate- and high-gain antennas depending upon data rate requirements and standardized wiring, with interfaces that support either Iridium or Inmarsat components.

Despite the economic slowdown, Pickering said, Esterline CMC Electronics saw an uptick in demand last year from manufacturers including Boeing and Airbus to install Swiftbroadband antennas on production widebody aircraft.

As for the retrofit market, “we have been doing a lot of proposals, but nothing has really kicked off yet. By doing it at the OEM level, the cost of doing everything is buried in the overall price of the aircraft,” while the cost of even an individual retrofit “has to be run by the CFO and president,” Pickering explained.

“When an airline does a retrofit program they have to do it on the whole fleet,” said Alan Hnatiw, CMC Electronics product manager for Satcom. “Having three aircraft that offer connectivity is fine for a trial, but when they offer it as part of the flight service” it raises passenger expectations. “So it can be a pretty substantial cash outlay.”

The retrofit market is of special interest to CMC since it has a few thousand of its antennas flying on aircraft that are ripe for upgrade to its CMA-2102SB antenna its top line SwiftBroadband product.

The antenna retrofit process for these aircraft is pretty straightforward. “Our strategy was to give our customers a path to upgrade (that minimizes) cost, complexity and headaches,” said Hnatiw.

“To upgrade the antenna, you take off 32 screws, pull the antenna off, take off two cables, and put on the new antenna and screws and two cables,” he said. “That is the extent of the labor for the antenna part and it can be done in an overnight.”

However, with all of the costs involved, “it is tough to build a business case for in-flight connectivity” in the air transport market, said John Barker, director of marketing and sales at CMC.

More and more, the decision about the connection is coming down to Ku versus Ka because of their speed advantage over L-Band products.

In the United States, for example, Row 44 is using Ku-band for the in-flight connectivity service it is set to install on Southwest’s fleet of 540 Boeing 737s. Row 44 is using Tecom KuStream antennas to connect with a network of satellites belonging to Hughes Network System. JetBlue Airways will use ViaSat advanced Ka-band satellites.

The Ka-band has gained a great deal of momentum in the market with ViaSat planning to launch a “media-enabled” satellite broadband system this year. Inmarsat also plans to launch a constellation of I-5 Ka-band satellites and a new wireless broadband network called Inmarsat Global Xpress in the next few years.

Aircell has taken notice of these developments and is focusing on Ka as it explores its international service, Chari said. “The challenge with Ku has always been in cost-per-bit and that is going to be dramatically lower with Ka,” he said.

However, the cost of “Ka will probably start out quite high before trending down” over time, said Best. Engineering issues may pose the bigger challenge. “It is a really high frequency system so it is just that much more complex,” he said.

Both Ka and Ku require larger antennas and “a key challenge (will be) to reduce the aperture size and weight without sacrificing bandwidth and coverage area,” said Cahill.

“Normally the reduction in the size of an antenna operating in these bands equals a reduction in data throughput, and our engineering teams are developing apertures that minimize this affect, thereby providing maximum data rate ability.”

There are efforts underway to develop a phased array antenna for Ka-band that would eliminate moving parts, Chari said. “You could do what is called beamforming, so by just controlling the signal feed to the phased array, you could point the beam any direction you want,” he said. A phased array antenna “also tends to have a very low profile when compared to mechanically steered systems.”

Phased array antennas are used in L-band systems, “but in the Ka/Ku bands with the kind of parameters they have and the pointing accuracy that is needed” it is a challenge. It will be a long-term project involving significant investment, Chari said.

Following are recent announcements by antenna and component manufacturers.

âž¤ Tecom Industries, based in Thousand Oaks, Calif., in November announced the expansion of its Ku-Band Satcom Antenna System product line, with the addition of the KuStream 1500 for commercial, military and other fast-moving aircraft.

Additionally, the KuStream 1500 was selected by ViaSat for integration in a communication system aboard a Boeing C-17. The system includes satellite antenna assembly, antenna control unit and a 40 Watt high-power transceiver.

“Our military customers were looking for a commercial off-the-shelf (COTS) product with a high level of maturity. Tecom’s KuStream Antenna was the ideal solution for this requirement,” said Arsen Melconian, Tecom president.

The system, which uses electronically controlled beams to transmit and receive signals from a designated satellite, gives commercial and military aircraft operators the ability to offer communications using commercial K- and Ka-band satellites. Boeing said the test demonstrated the system’s ability to support a range of applications, including file transfer and a Voice over Internet Protocol videoconference.

âž¤ Thrane & Thrane of Denmark in November was awarded a supplemental type certificate for its Aviator 200 SwiftBroadband system for installation on Cessna 500, 550, S550, 552, 560 and 560XL aircraft. Thrane & Thrane’s Aviator 200 is a lightweight in-flight connectivity system, providing services including data, video and voice.

âž¤ In December, Cobham said it will provide antennas and avionics for the indigenous Korean Utility Helicopter, under a long term, multi-million-dollar agreement with the manufacturer, Korean Aerospace Industries Ltd. Cobham Antenna Systems will supply a suite of communications and navigation antennas along with a navigation transceiver manufactured by sister division Cobham Avionics and Surveillance.

âž¤ Esterline CMC Electronics at Farnborough 2010 said its CMA-2102SB satcom high-gain antenna system was certified on the Spanish air force’s A310. Also, at the Farnborough air show, Air France selected the CMA-2102SB for its future B777-300s.

âž¤ The Naval Surface Warfare Center (NSWC), Crane Division in Crane, Ind., in October introduced an antenna testing assembly for Navy aircraft. Ten Transmitter Antenna Test Systems (TATS) Vector Network Analyzer (VNA) assemblies were delivered to commands around the world. A total of 23 TATS systems are expected to be fielded by April, according to the Navy.

The Network Gateway unit is a component of EMS Aviation’s Forté AirMail e-mail system, which enables users to send and receive in-flight e-mail via handheld devices.

Forté AirMail is offered as two options. These include the AirMail-enabled Network Gateway and Forté AirMail with a CNX-100 Wi-Fi access point. Other required components include a Forté Iridium transceiver and a single or dual Iridium antenna. 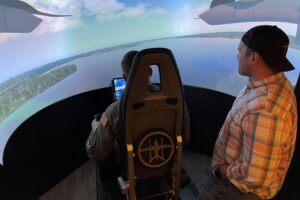