JetBlue Airways will equip up to 35 of its Airbus A320s with automatic dependent surveillance-broadcast (ADS-B) capability, including the ACSS “SafeRoute” suite of ADS-B software applications, in a demonstration funded with $4.2 million from FAA.

The agreement will enable JetBlue to fly more precise flights under ADS-B surveillance from Boston and New York to Florida and to the Caribbean beginning in 2012. FAA will collect data and perform evaluations of ADS-B on revenue flights. The agency will “gather critical flight data that will inform our effort to open additional, less congested and off-radar flight paths along the Eastern seaboard,” LaHood said.

Babbitt advanced the concept of “best equipped, best served” in his remarks, which were aimed at convincing other operators of the business case for investing in new avionics.

“We’re really excited with this partnership,” Babbitt added. “It’s going to allow us to quantify the cost savings and improved efficiency as a result of this partnership. We want to be able to share this data and spread the word, and we want our partners to know that it’s better to come onboard sooner and take advantage of the innovations that are moving our airspace system forward. … The reality is the business case will inspire you to buy this equipment on your own. That’s what JetBlue is helping us prove with this partnership.”

The plan is to install the equipment during overnight turns or scheduled maintenance of the aircraft, representing about a third of JetBlue’s 115 A320s.

“The initial part is relatively easy,” Kordys said in a telephone interview. “We’re estimating probably eight to 10 hours of work; mostly replacing the boxes and very limited wiring. The goal is to modify all 35 aircraft as quickly as possible. We would hope to do it within six months, seven months.”

This is considered a first phase to demonstrate ADS-B Out aircraft position reporting. A second phase would involve the display of surveillance data in the cockpit, known as ADS-B In, using Class 3 electronic flight bags.

The ADS-B demonstration with FAA “is actually a key initiative for JetBlue as part of our annual key initiatives,” Kordys said. “Definitely, we like to be industry-leading. If there are challenges out there with airspace, we want to be part of the solution.”

The JetBlue partnership is similar to one ACSS has with US Airways dating to 2008, to equip 20 Airbus A330s for ADS-B. The latter agreement included a demonstration at Philadelphia International Airport of ADS-B targets on the airport surface, displayed in the cockpit on a Goodrich Class 3 EFB (Avionics, March 2010, page 20).

Additional functionality will be added to US Airway’s A330s to demonstrate ADS-B enabled in-trail procedures (IPT) on trans-Atlantic flights, a program sponsored by Eurocontrol under the CASCADE program, and including British Airways and Delta.

“It’s been a long haul, because these are not easy things to do,” Ganase said of the ACSS partnership with US Airways. “We’re coordinating a lot of people between the airline, the FAA and ourselves, equipping the aircraft, coming up with the procedures.

“It’s not just the equipment; the equipment has been certified since 2007,” Ganase explained. “It’s all the processes and procedures that have to go around it. It’s the training we’ve equipped a simulator in Oklahoma City — because you have to train the pilots as well. All that is part of the program. We’ve learned a lot, and JetBlue are the next ones to benefit from all that experience.” — Bill Carey

In his State of the Union Address Jan. 25, President Obama declared, “Within the next five years, we will make it possible for businesses to deploy the next generation of high-speed wireless coverage to 98 percent of all Americans.”

The next day, the Federal Communications Commission (FCC) issued a conditional waiver to LightSquared LLC, granting the company authority to use spectrum in the L-Band to provide 4G broadband services nationwide.

LightSquared is based in Reston, Va., with an operations office in Ottawa, Canada. The company on Feb. 14 announced that its SkyTerra 1 satellite, launched in November from Baikonur Cosmodrome, and Space-Based Network successfully completed post launch testing and acceptance.

A unique feature of the LightSquared broadband proposal is to use terrestrial stations to transmit a high-powered signal in the spectrum adjacent to GPS, which uses a much lower powered signal.

The potential for interference is of great concern to the GPS and aerospace communities and could have a significant impact on the National Airspace System and future NextGen technology.

The operating spectrum propsed for the LightSquared system is in the 1525-1559 MHz band. The GPS system operates in the 1559-1610 MHz band. Given the high-power transmissions of the terrestrial antennas (estimated to number as many as 40,000 nationwide) that are part of LightSquared’s proposed infrastructure, the potential for interference with GPS signals is significant.

The point of failure for the study was established to be when GPS units lost tracking of four satellites or when the units reverted to cell phone tower triangulation. One of the four cell phones tested broke lock at 20 meters from the antenna; the other three cell phones continued to operate. (1)

The company’s report also stated that “LightSquared intends to test at least 10 more devices, both in the field and in a certified test laboratory (AT4 Wireless).  There was no mention made in the report of any plans to evaluate aviation GPS receivers.

On Jan. 19, the United States GPS Industry Council held a teleconference with officials from the FCC and several member companies at which it presented a study evaluating a portable automotive GPS device and a common general aviation GPS receiver supporting both GPS and WAAS, RNAV, RNP and LPV procedures. The test used technical details of the LightSquared system and concluded that if the LightSquared application is approved as is, “widespread GPS jamming will occur.”

Concern is being voiced by federal officials at both the Departments of Defense and Transportation as well as the user community at the lack of a more formal regulatory process by FCC in granting the LightSquared waiver.

The outcome of FCC’s actions in the coming months could have serious operational, financial and political consequences as well as putting the future of the National Airspace System and the billions of dollars already spent on NextGen at risk. — Frank Alexander

The 29-minute flight at Edwards Air Force Base, Calif., was described as an historic and critical step toward demonstrating operation of an unmanned, autonomous, tail-less aircraft on an aircraft carrier, planned for 2013. The flight provided test data that will contribute to verification and validation of the X-47B guidance and navigation software and aerodynamic control.

Program leaders briefed reporters on the flight Feb. 5 in a teleconference.

“The team is still analyzing the data, but I will tell you the performance was rock solid,” said Capt. Jaime Engdahl, UCAS-D program manager with the NAVAIR PMA-268 Unmanned Combat Air Systems program office. “It did exactly what was expected. The flight path was as planned and preliminary feedback from the engineers was that it matched the model, aerodynamics performance and guidance control very well.”

The mission of the demonstrator “is to look at the aerodynamic shape and the performance in the carrier environment,” Engdahl said. “There are unique challenges with taking a ‘cranked kite’ configuration to the ship.”

The program this spring will test X-47B software on a carrier at sea, using an F-18 surrogate aircraft. Algorithms will be introduced for networking capability via the Rockwell Collins Tactical Targeting Network Technology (TTNT) high-speed, low-latency datalink and precision GPS navigation.

The X-47B will remain at Edwards AFB for flight envelope expansion before moving to NAS Patuxent River, Md., later this year for carrier suitability testing, followed by carrier trials in 2013.

Northrop Grumman was awarded the UCAS-D prime contract from the Navy in August 2007. The six-year contract includes development of two X-47B fighter-sized aircraft.

Asked to explain, Pamiljans said, “It’s been designed from the ground up to be carrier capable. If you take the tail-less shaped assembly and how the software and the algorithms support being able to land and capture the arresting gear and launch from the carrier also, that makes this really a true robust autonomous vehicle that doesn’t exist right now.”

The flight served “to validate the aero performance characteristics, the spoiler (and) flight-control surface and get some speeds across the vehicle management system through the flush-mounted data ports, which pick up the air speed,” he said. “The flush mounted data ports (are) a big part of the vehicle design characteristics (with) the inlets, the exhaust area, tapered trailing edges — all that works together as a system. But it’s not a full LO, stealth broadband aspect aircraft; it wasn’t designed that way.”

Pamiljans said the second air vehicle “is finished with no test anomalies,” with a first flight planned this summer according to the schedule. — Bill Carey

âž¤ Raytheon was awarded a $52 million contract from the Naval Air Systems Command to produce APG-79 Active Electronically Scanned Array (AESA) radars for the F/A-18 Super Hornet. The third retrofit contract brings orders for the update of Block II F/A-18s to 57, Raytheon said. Deliveries are expected to begin in October 2012.

âž¤ Northrop Grumman was awarded a $5 million contract from the U.S. Marine Corps for a “key phase” of the Common Aviation Command and Control System (CAC2S) to modernize the service’s current air command and control system with an integrated, open, modular and scalable system. Phase II of the program will provide real-time processing and control of radar data and near real-time tactical data link communications processing.

âž¤ Northrop Grumman was awarded a $3.3 million contract from the U.S. Navy to participate in the Unmanned Aircraft System Control Segment Architecture Working Group (UCSWG). The objective of the UCSWG effort is to define a common UAS control station architecture based on standard data models and service interface definitions.

âž¤ Emteq, New Berlin, Wis., was awarded a contract from the U.S. Department of Defense for Phase I of a Small Business Innovation Research program to develop a rotor blade tip lighting system. The goal of the program is to design and build a reliable, lightweight rotor blade tip lighting system that can be modulated to provide red, green and white navigation lights at appropriate positions on the azimuth; a hover mode to mark the complete rotor disk circumference to ground crew; and a low-observable, NVG-compatible mode for night formation flight.

âž¤ China Eastern Airlines selected the TopSeries in-flight entertainment system from Thales for 16 of its new A330-200s. The first aircraft is scheduled to deliver in November 2011. The system includes a touchscreen display — 15.4-inch in business class and 10.6-inch in economy; tethered passenger control units and USB connections. 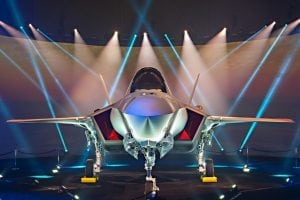 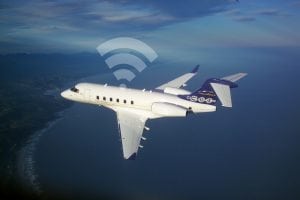 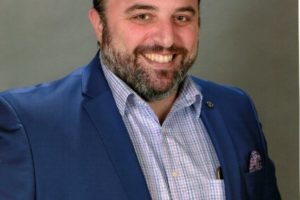 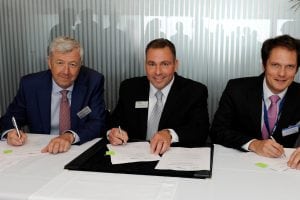