As Electronic Flight Bags (EFBs) have gained acceptance as valued flight deck components, the range of applications they host is proliferating. From their early utility of displaying reference documents such as aircraft operating manuals and navigational charts, EFBs now are seen as a solution for broadcast weather, cabin surveillance, airport surface monitoring and potentially the display of air-traffic information, among other uses.

Due to cost, airlines have opted largely for Class 2 EFBs — portable electronic devices mounted in the aircraft — over installed Class 3 systems subject to supplemental type certification or other airworthiness approval. Nevertheless, airlines are adopting the technology in a big way. For example, United Airlines plans to install dual, Class 2 EFBs fleetwide on some 500 aircraft.

At a recent RTCA symposium in Washington, D.C., Kevin Brown, vice president and general manager of Boeing’s Air Traffic Management business, suggested EFBs could be an option for onboard ATM requirements such as cockpit displays of traffic information, alleviating expensive retrofits of legacy aircraft.

"From a deployment perspective, people are looking at [EFBs] and starting to see they’re more than what they think," said Ken Crowhurst, executive vice president and managing director of navAero, an EFB computer and display hardware provider based in Chicago.

Industry is out front in driving EFB applications. FAA expects to publish a rule on cabin surveillance and crew monitoring requirements this summer, having issued a notice of proposed rulemaking in 2005.

Meanwhile, navAero, for one, was in discussions with AD Aerospace Ltd., of Cheshire, U.K., to incorporate the latter’s digital video camera surveillance system, which would allow pilots using an EFB to "switch from an approach chart to an issue in the cabin."

Crowhurst said navAero works with major applications management providers, including Jeppesen, ARINC, Lufthansa Systems and Rockwell Collins, and has "strategic relationships with virtually all" EFB software providers to scale the company’s hardware set for new applications. "The hard part is getting the operational approvals from FAA and EASA [the European Aviation Safety Agency]," he said.

Among planned system enhancements will be integration of Gatelink wireless communications to update EFBs from the ground.

In March, FAA said it would streamline the process of certifying the "own-ship position" function of moving map displays, affording pilots with safety benefits on the airport surface as soon as possible. The revised process — aimed at certifying Class 2 EFBs for surface operations — is expected to reduce the cost of certifying an EFB to as little as $20,000, one-tenth the original cost of EFB certification for ground and air operations, the agency said.

"Since issuing its original guidance for EFB certification in 2003, the FAA has been listening to industry concerns about the complexity and high cost of certifying EFBs to provide the Airport Moving Map/Own Ship Position function for surface movements," FAA said. "... Based on feedback we have received, we believe the aviation industry will have the financial incentive to produce these devices in mass quantities [with revised rules]. The result: A higher level of safety at a significantly reduced cost."

Streamlined certification for "own-ship" position on moving maps "will likely tip the scale even more toward Class 2 hardware," reports Teledyne Controls, based in Los Angeles. The avionics manufacturer was about to enter full production of Class 2 EFB hardware, and had teamed with Jeppesen to integrate Jeppesen and Teledyne applications suites. It was in the process of obtaining supplemental type certifications (STC) for the Class 2 installation on the Airbus 320 family and Boeing 737 families.

"Our core set of EFB applications — document viewer, aeronautical chart viewer and performance tool — continue to be very popular and are included in almost all of our current EFB pursuits," Teledyne said. "More and more customers are realizing that (a) content/configuration management is key to having a successful EFB program, and (b) proper authoring and indexing of documents is the key to a usable document viewer on the EFB."

"We also see some interest in real-time graphical weather and techlog applications on the EFB," the company said.

"We can do some cool things," said Paul DeHerrera, Universal Avionics vice president of marketing and support. "For instance, when you touch down on the ground, we’re looking at the aircraft speed and weight on wheels, and so we transition your charts automatically from the approach plate to the airport diagram. With a Class 3 device, we can show the aircraft position, the actual aircraft icon, heading and position, real-time, through the entire approach and through the transition to the ground, and then taxiing around."

The UCD displays weather information supplied by WSI Corp., Andover, Mass., which now will be available over Sirius Satellite Radio.

"To answer our customer’s demand for this sophisticated level of situational awareness and security both on the ground and in the air, IS&S is pleased to provide e-chart features as part of its innovative flat panel cockpit display systems, and looks forward to providing additional EFB features in the future, such as satellite weather radar images and aeronautical data," said Roman Ptakowski, IS&S president.

STC’d in a wide range of aircraft including all Gulfstream, Falcon, Global Express and Embraer models, plus Boeing’s 737 and 767 airliners, the Pilatus PC-12 and many other aircraft types, the unit presents the pilot with an advanced, yet intuitive, data display accessed via its touch-sensitive screen and FMS-style line select keys. These provide quick access to specific functions such as electronic charts, performance calculations, checklists, e-documents, weather applications, video surveillance and many other functions.

PilotView was developed after extensive pilot consultation. Its keyboard slides out below the display screen when required, but otherwise remains hidden from view.

Other features include a simplified menu structure, a full 8.4-inch active matrix LCD XGA (extended graphics array) display of approach charts, fully dimmable but with good readability in all cockpit lighting conditions, and a one-touch key for instant video security surveillance. A second touch brings immediate return to the previously presented data. In a dual-pilot installation, a similar one-touch key allows either pilot to view the other pilot’s display, again with instant reversion to the previous presentation.

Among features of Gen-X are: no "on" or "off" switch, a sealed, high-G tolerant hard drive and ARINC 429, USB and RS-232 interfaces. The Genesys application software can run third-party applications, supports a new document viewer and offers charts from a new supplier — Maptech, of Amesbury, Mass.

DAC International said it is working on supplemental type certifications on CRJ, Boeing and DC-8 aircraft. The new system can cut in half the cost to airlines for navigation chart products and services, the company said.

"We believe the EFB market is just beginning. It is amazing that the industry has taken so long to embrace this idea," said Steve W. Davis, technical director of airline and government sales with DAC International.

"We are still printing NOTAMS out in Telex formats and using paper for charts and manuals. The EFB in all its forms will be the single biggest selling piece of avionics in the next five years." 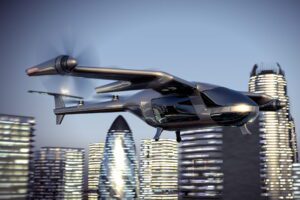