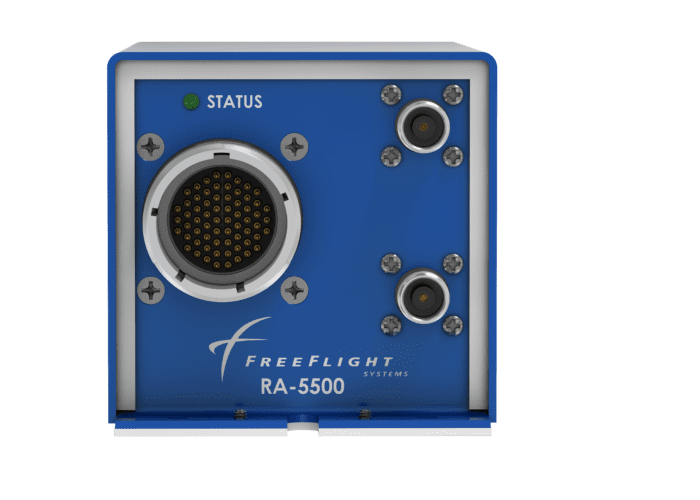 The FAA has issued two new airworthiness directives requiring changes to the limitations sections of fixed and rotary wing flight manuals regarding the vulnerability of radar altimeters to 5G C-Band wireless networks. Earlier this year, FreeFlight Systems unveiled a new line of radar altimeters, including the RA-5500 pictured here, that are designed to resist 5G interference. (FreeFlight Systems)

Pilots of some fixed- and rotary-wing aircraft will be prohibited from using certain types of landing procedures such as automatic landing and Required Navigation Performance (RNP) at airports where the presence of 5G C-Band stations could cause interference to their radio altimeter—also known as radar—performance,  new airworthiness directives (AD) issued by the Federal Aviation Administration (FAA) on Tuesday.

The decision to publish the two ADs comes following several months of concern expressed by the FAA and advocacy groups representing every segment of the aviation industry over the deployment of 5G C-Band networks being rolled out by AT&T, Verizon, and several other cellular and wireless service providers. In November, AT&T and Verizon were among the wireless providers indicating that they planned to delay the debut of their new networks from Dec. 5 to Jan. 5, 2022, to address FAA concerns expressed by the agency in a Nov. 2 special airworthiness information bulletin.

Now, with 5G wireless broadband deployment scheduled to begin in 46 different U.S. markets next month, the FAA issued a new AD outlining specific landing and approach procedures prohibited at specific airports that are still being identified based on the coming 5G rollout.

"The FAA believes the expansion of 5G and aviation will safely co-exist. Today, we took an important step toward that goal by issuing two airworthiness directives to provide a framework and to gather more information to avoid potential effects on aviation safety equipment," the agency said in a Dec. 7 statement.

Two ADs were published by the agency to address specific changes needed to the limitation sections of transport category fixed-wing airplane/aircraft flight manuals (AFM), and separately for rotorcraft flight manuals (RFM). AD 2021-23-12 identified the following operations requiring radio altimeters as being prohibited while operating in U.S. airspace in the presence of 5G C-band wireless broadband at airports that are still being identified:

The agency plans on naming the identified airports in upcoming Notices to Air Missions (NOTAMs). Separately, operations determined to be prohibited for rotorcraft operators equipped with radio altimeters were identified by AD 2021-23-13, and include the following:

In the two directives, the FAA states that its urgency in issuing the directives is based on a study published by the Radio Technical Commission for Aeronautics (RTCA) in October 2020 on the possible impacts of 5G interference with commercial aviation. However, aviation companies have been warning the FAA about the danger posed by 5G transmissions occurring in the 3.7–3.98 GHz frequency range since at least 2017 per a Nov. 18 letter by aviation companies and interest groups to the Federal Communications Commission (FCC).

The modern standard for commercial and civil aircraft is the frequency-modulated continuous-wave (FMCW) radar altimeter. Based on the RTCA study and analyses submitted by radio altimeter manufacturers, the FAA ultimately determined that "at this time, no information has been presented that shows radio altimeters are not susceptible to interference caused by C-Band emissions permitted in the United States."

The AD also acknowledges C-Band wireless broadband network deployment that has already occurred in some other countries where "temporary technical, regulatory, and operational mitigations on C-Band systems have been implemented while aviation authorities complete their safety assessments."

FAA officials determined that the two ADs affect 6,834 airplanes and 1,828 helicopters registered to operate in the U.S. Changes outlined by the directives are estimated to cost $85 per aircraft/helicopter. The revisions are required to occur on or before Jan. 4, 2022.