Textron Aviation is expecting strong demand this year among its customers for the Garmin G5000 avionics suite.

"We’re anticipating the Garmin G5000 upgrade for Citation Excel/XLS business jets to be the most popular aftermarket avionics request in 2020," the company wrote in a Feb. 26 email to Avionics International. "The Citation Excel and XLS family continues to be one of the world’s most popular business jets, and a retrofit offers owners and operators the latest in satellite-based navigation capabilities, digital flight management tools, current and future NextGen operational support, and graphical display technologies for enhanced situational awareness."

The G5000 integrated flight deck for the Citation Excel and Citation XLS features three landscape-oriented displays with split-screen capability, intuitive touchscreen controllers, and geo-referenced Garmin SafeTaxi airport diagrams, according to Textron Aviation. As a new feature for the Citation Excel, a G5000 emergency descent mode and is enabled by the autopilot in the event of a loss in aircraft pressurization, the company said. Additionally, operators gain access to more airports and lower approach minimums throughout the world as the G5000 has PBN/RNP 0.3 with LPV/APV approach capability.

"The explosion in avionics capabilities is introducing more integration in cockpits and greater situational awareness for pilots and making airplanes way safer," Ron Draper, the CEO of Textron Aviation told Avionics last week after a round table to discuss the General Aviation Manufacturers Association State of the Industry 2020 report.

While Garmin revenues from Automatic Dependent Surveillance-Broadcast (Out) transponder sales will likely decline in the second half of this year, Garmin is expecting strong aftermarket demand to offset that decrease.

"2019 was an extraordinary year for our aviation segment," Cliff Pemble, the CEO of Garmin Ltd. said during an investors call on Feb. 19 to discuss the company's fourth quarter earnings for 2019. "ADS-B was a significant contributor to growth, but, on a combined basis, other categories contributed even more. We experienced growth in aftermarket systems, as customers recognized the strong value proposition of modern cockpit electronics. We also experienced growth in OEM systems, driven by popular new aircraft and from increasing demand for trainer aircraft.”

At the end of last year, the FAA reported more than 118,000 U.S. airplanes out of 160,000 had ADS-B (Out). "So ideally, that would mean there's something over 40,000 aircraft that could be left to equip," Pemble said on Feb. 19. "We don't think that all of those will be. Some of those are probably airplanes that maybe aren't in the best shape and might be scrapped."

JSF Down the Wire 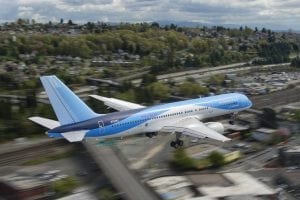 NASA Completes First Round of Tests on Boeing ecoDemonstrator