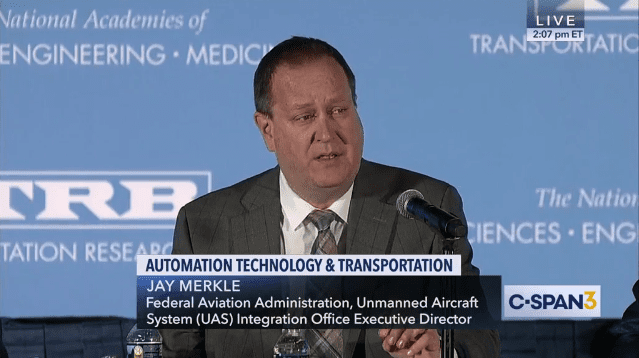 Commenting on future transportation technology coming to the world of aviation, Merkle ensured the audience that urban air mobility (UAM) is “more than just hype … this is more than just promotional videos.” He described the sector as meeting future demand for regional aerial trips ranging from 30 miles to 300 miles.

“We have at least six aircraft well along in their type certification, which is the first step in introducing a new aircraft into operation,” Merkle said. “We are beginning to work on integrating them operationally, so the pilot requirements, the airline operating requirements, and then we’re also beginning to work on the airspace integration as well.”

The FAA would not share details regarding the six aircraft Merkle referenced, or what pathways to certification they are using. The agency has not released any new certification requirements particular to urban air mobility, like the special condition for VTOL aircraft that EASA released last summer, suggesting these aircraft are using existing pathways.

In May 2019, Merkle pushed back on suggestions that new regulation would be required to certify UAM aircraft, which often mix elements of helicopters and airplanes.

“It is absolutely not true that there need to be all new regulations” governing UAM, Merkle said during a speech at AUVSI’s Xponential conference. “We really cracked the code on how to take decades-old aviation [rules] and get to the essence of each of those requirements and say 'What was the safety goal here?”

“We found out through Part 23, we can really bring an aircraft through the process and address all the concerns,” Merkle said at the time.

Here are some of the aircraft we believe are most likely among the six Merkle referred to as being ‘well along’ in the certification process:

One wild card: Detroit-based Airspace Experience Technologies (or AirspaceX), which is developing its Mobi-One air taxi or cargo delivery concept, has stayed out of the headlines, but the company targets 2019 for tooling and certification and 2021 for aircraft production. A sub-scale model displayed at Uber Elevate 2018 had already flown in limited tests, according to co-founder Jon Rimanelli.

“Particularly for the human transportation component, most of the business models rely on taking people from some hub area in an urban or suburban area, and transporting them across surface congestion to another hub area where you can then meet up with short-range surface transportation,” Merkle said.

Uber targets 2023 as the launch date for its Uber Air service, using new electric VTOL aircraft, in Los Angeles, Dallas and Melbourne, though many of its vehicle partners don’t expect their aircraft to be ready until later in the decade.

“We think that’s going to be a very important area over the next few years and we see that as we solve the problems with small UAS and beyond visual line of sight, we’ll be turning more and more of our attention to this urban air mobility,” Merkle said. “To that end, we are continuing and starting to work on community engagement.”

When asked for further detail on current and future plans for UAM-related community engagement, an FAA representative referenced the agency being involved in numerous industry trade shows, organizing a National Drone Safety Awareness Week, and convening the industry-based Drone Advisory Committee — a definition of “community engagement” that seems limited at best.