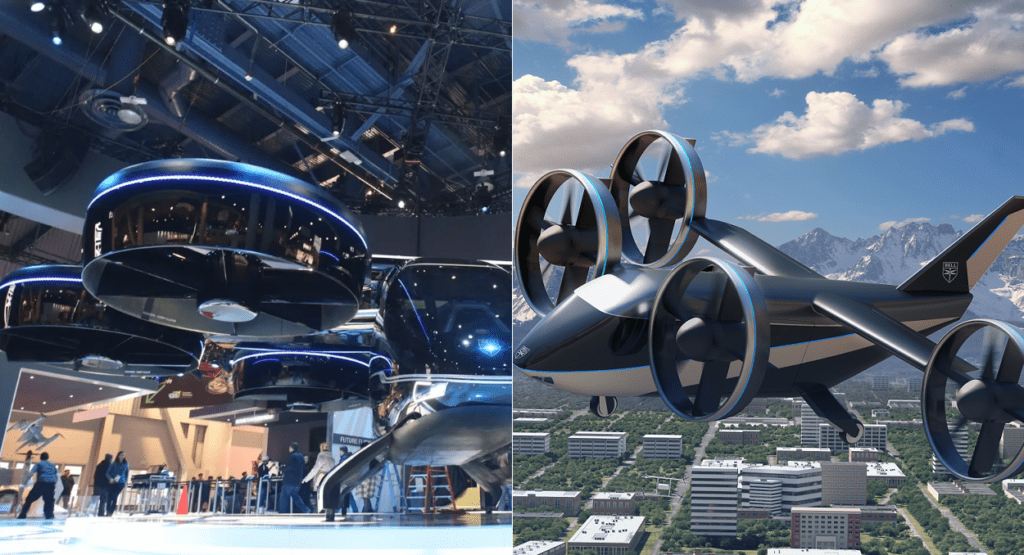 Bell announces numerous new efforts in the air taxi space, including a new all-electric version of the Nexus aircraft. (Bell)

ARLINGTON, Texas — Bell has been showing off its ‘Nexus’ hybrid-electric air taxi and ‘APT-70’ tail-sitting cargo drone at industry events for quite a while, but the company is no longer content with simply developing electrical vertical takeoff and landing (eVTOL) aircraft for the flying taxi future. At this year’s Consumer Electronics Show in Las Vegas, Bell will unveil a full-scale ‘Mobility-as-a-Service’ software play, AerOS, which is poised to compete with Uber, Blade and others to be the digital infrastructure behind everything from customer booking to fleet management.

To showcase AerOS’ capabilities in a tangible way, Bell’s exhibit at CES will be dominated by a ‘smart city,’ with Nexus air taxis and APT cargo drones constantly flying from building to building across an LED display of the people, cars and trees that make up an urban downtown. Visitors will be able to use iPads to schedule air taxi trips and then watch them take place, with all the deconfliction, charging and maintenance needs handled and tracked by AerOS.

Oh, and by the way, Bell is transitioning its work on the hybrid-electric, six-rotor Nexus to a new design, the Nexus 4EX: four rotors instead of six, all-electric, and ‘X’ for experimental.

Of Uber’s seven announced vehicle partners for its Elevate project, Bell’s Nexus stood out as the aircraft designed to be hybrid-electric rather than fully electric — a decision driven by initial signals that potential eVTOL customers wanted range.

“[Customers] wanted range, so we felt, let’s start at range and we can work our way back in,” Bell CEO Mitch Snyder told journalists during a December press visit to the company's headquarters. “And from the discussions, we felt there were really becoming two distinct requirements, one for inner-city movement and one for more range.”

With demand growing for inner-city aerial transit, Bell is pivoting toward that mission with the Nexus 4EX. Designed to maximize efficiency in forward flight, which is crucial now that the aircraft is fully electric, the 4EX has two fewer rotors and a longer back wing to provide more lift.

Bell is targeting a 60-mile range for 4-5 passengers and luggage, including reserves and multiple takeoffs and landings. Innovation lead Scott Drennan expects that by the time the Nexus 4EX is operation in the “mid-to-late 2020s,” energy storage density will have improved roughly 10-15 percent, allowing the design to hit these targets.

Though six rotors provide greater hover capabilities, Drennan is confident the new design will match the safety of the previous aircraft — now referred to as the Nexus 6HX, for six-rotor hybrid — and beat it on affordability due to fewer critical parts.

The pivot is a timeline setback for Bell, as its competitors race to demonstrate their aircraft in-flight and the stealthy Joby Aviation, a newly-announced Uber partner, remains committed to rolling out commercial operation in 2023. But Drennan stressed that the new design relies on much of the same data, such as wind tunnel testing, and the company is focused on the end goal rather than immediate benchmarks.

“My engineers hate when I say this, but tech demonstrators are easy," Drennan said. “We care about a viable path to certification and service to the market.”

Most of the Nexus supplier team remains the same, according to Drennan, with the exception of Safran, which last year unveiled its Hybrid-Electric Propulsion System (HEPS) to power the original hybrid-electric Nexus aircraft. Bell is currently in the process of down-selecting a new propulsion provider and expects to make that announcement in early 2020.

Bell stressed that the Nexus 6HX, though no longer the company’s focus, has not been retired, and the new 4EX is designed to be propulsion-agnostic depending on customer requirements. 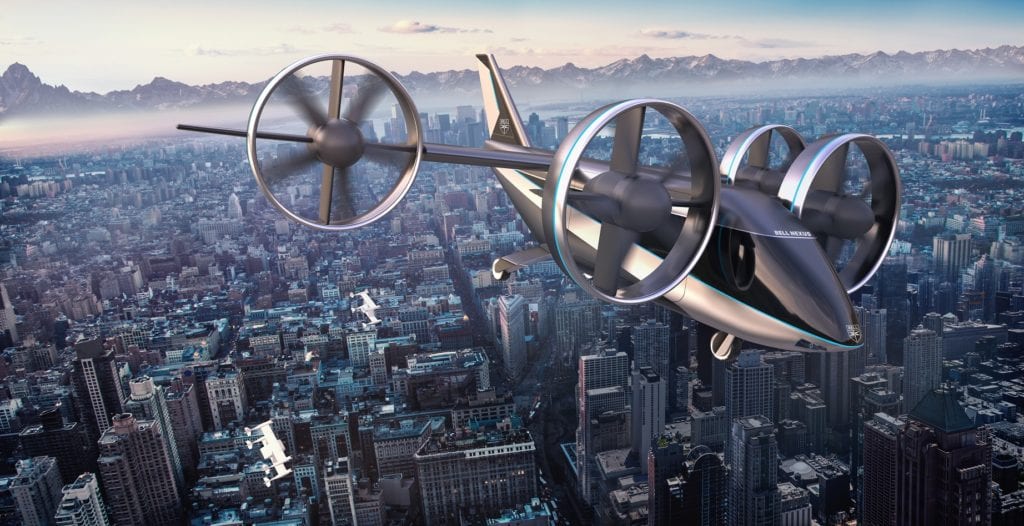 “One vehicle was very much compromising the attributes of each, so we went at it in a different direction and said, let’s design a vehicle that can take agnostic propulsion,” Snyder said.

Racing to build and certify eVTOL aircraft, air taxi developers are faced with the incredibly high safety bar set by decades of incremental improvement by the aerospace industry. EASA’s eVTOL special condition holds these aircraft to the same reliability bar as commercial airliners, requiring less than a 10-9  chance that catastrophic failure will occur for passenger-carrying vehicles flying over populated areas. The FAA has yet to release its policy.

In discussing safety and reliability, Drennan often stressed the importance of the “short poles in the tent,” referring to operational and maintenance safety. If those two elements of the system are not designed to meet a similar one-in-a-billion reliability standard, the aircraft’s redundancy and reliability alone will not ensure safe operations — especially with the scale and tempo of operations UAM hopes to achieve.

“We’re talking about 2,000 hours [flight time] per year, hundreds, maybe thousands of vehicles across these different areas. And when you start doing math, you want that number to be where it is,” Drennan said, a push-back to elements of the air taxi industry that want more leniency in safety requirements.

Bell is still an Uber Elevate partner, according to the company, though it is clear there are disagreements over issues such as safety benchmarks. Discussing the necessity of achieving 10-9 reliability for eVTOL aircraft, Drennan mentioned “Uber and other manufacturers [who say] well, 10 to the minus seven or eight might be sufficient.” Uber did not respond to requests for comment on its safety goals or relationship with Bell, but the original Elevate white paper it released in 2016 targets twice the safety rate as cars, defined by per-passenger-mile. That would be four times as safe as current on-demand Part 135 air taxi operations, via rotary or fixed-wing aircraft, but as much as 160 times less safe than Part 121 commercial airline operations, based on safety statistics used in the white paper.

So how does Bell plan to ensure safe operations and maintenance of its vehicles? The answer appears to be to do it all in-house … which means the company is going to need a bigger house. 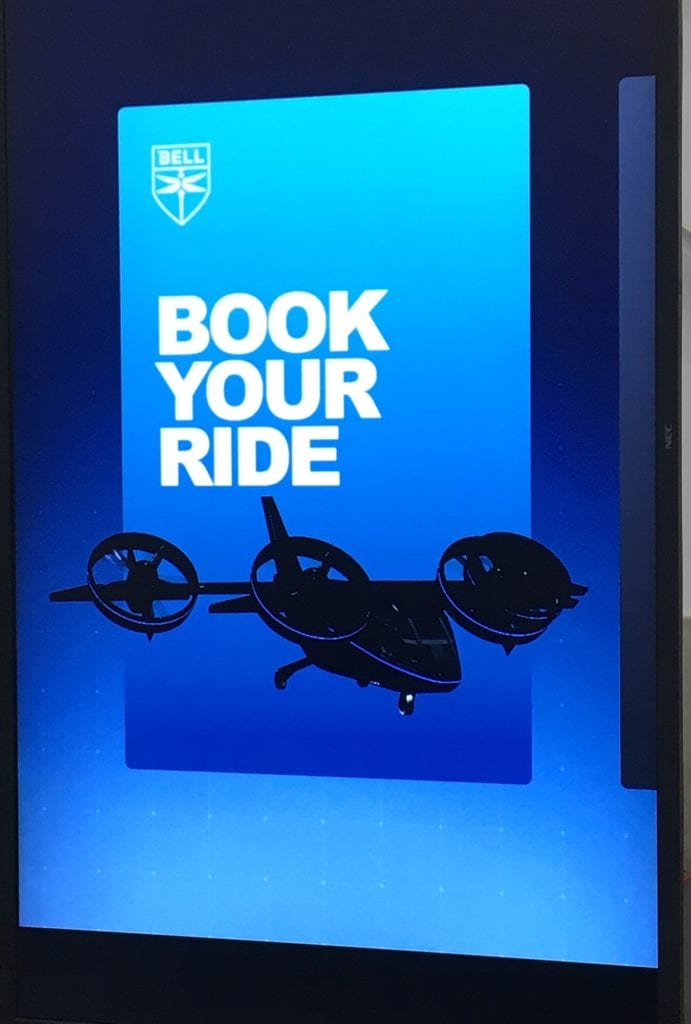 “When we’re discussing digital infrastructure, what does it mean — [we’re talking about] the airspace integration, booking engines, routing optimization, predictive analytics, and so forth,” said Matthew Holvey, intelligent systems lead for Bell’s innovation team. “Bell AerOS is the aerospace operating system that solves the digital backbone need of air mobility.”

The proprietary AerOS software platform is intended to manage both customer-facing interacting and fleet monitoring, with interfaces for riders to request air taxis as well as for fleet managers to observe aircraft health and charge status. The system uses artificial intelligence to predict ridership demands, distribute usage evenly across aircraft and predict maintenance needs. AerOS will also integrate airspace monitoring services, though Bell intends to partner with an existing unmanned traffic management provider for that capability — a partner which the company intends to announce soon.

“We’re talking about the demand signal coming in has to flawlessly interchange with the AI master scheduling engine,” Holvey said. “That’s deciding what these 100 aircraft are going to do, where they’re going to go. If you’ve got battery management that dictates that these batteries are healthiest, when you discharge to this percentage, then your deeper discharges need to be spread out across your fleet, which means you need to be tracking which aircraft and which batteries are seeing those deeper discharges … you need to spread that fatigue across different aircraft.”

“If you have all of that data accessible and are using current technology — artificial intelligence, optimization algorithms — then you can accomplish that today,” Holvey added. “Drive down your costs, drive up safety, and make this truly approachable.” 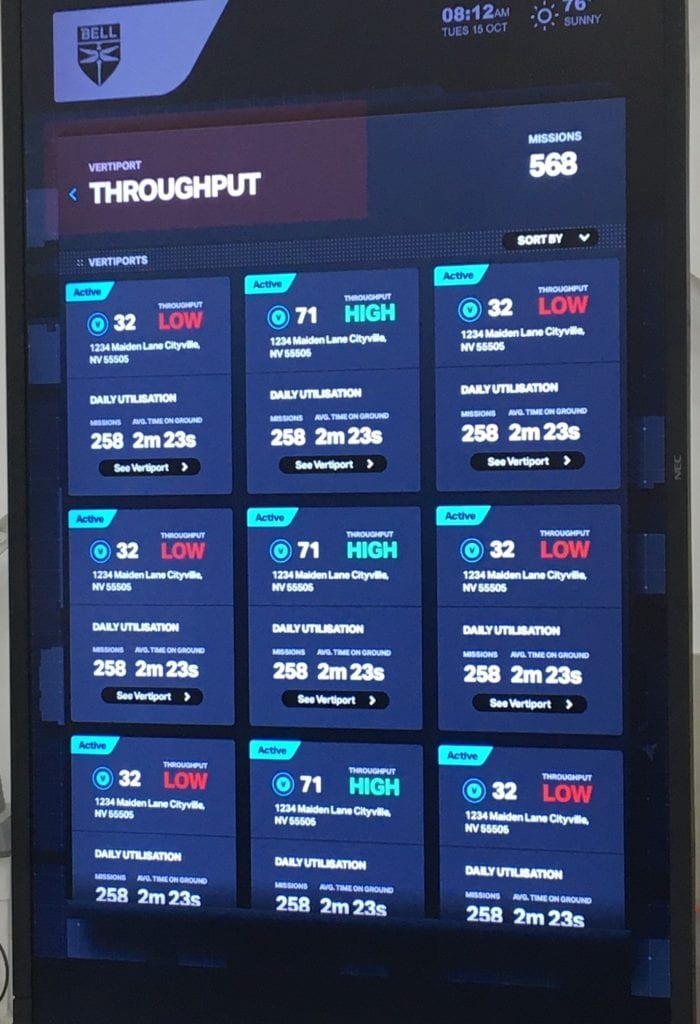 The 'fleet-facing' side of Bell's rideshare app is intended to provide managers with data on throughput, charge, usage, etc. (Brian Garrett-Glaser)

Some of AerOS’ capabilities were demonstrated to reporters at Bell’s Flight Research Center in Arlington, Texas, through the ‘smart city’ display Bell will showcase at CES this week. Small-scale versions of APT and Nexus unmanned vehicles travelled from rooftop to rooftop, sometimes simultaneously, as the AerOS system managed upcoming flight plans and tracked aircraft usage. The full display at CES will demonstrate aircraft autonomously landing at a “charge station” for battery swaps as well as mock weather and emergency medical events that impact service.

“If you look at all the verticals available to provide mobility-as-a-service, air vehicle and [maintenance, repair and overhaul] — the two things that we do today — are what I call the bookends,” said Drennan, describing the possibilities for Bell’s involvement in the ecosystem. “Look in between. Operations is a part of it, the digital infrastructure, then the physical infrastructure.”

“We’re not going to be a real estate company,” Drennan added, finally placing an outer boundary on the company’s vision. “But we’re going to inform that physical infrastructure. It’s not just about the landing pad, it’s about telling the community how much juice you need to send up that vertiport or that mobility center to recharge these vehicles.”

The financial incentives for a more expansive UAM play by Bell are clear. A market analysis produced by Nexa Advisors bullishly predicts the value of the urban air mobility market by 2040 to be at least $318 billion, with aircraft manufacturers capturing just $41 billion, while service operators will rake in the largest piece of the pie at $244 billion. But Drennan sees a direct ownership approach to UAM as beneficial to safe operations as well.

“What if we thought we should operate these vehicles initially or out into the future? What would be the result other than financial efficiency? Safety,” Drennan said. “Can we operate vehicles safer because of what we know about vehicles like this, because of our training history, the pilots we have working at Bell today?”

Bell’s intent is to offer AerOS as an open and customizable platform, according to the company, offering customers flexibility in which pieces they want to use — including non-Bell aircraft.

With AerOS, the smart city and Bell’s emphasis on CES — a consumer-focused tech show — Bell may be veering into the realm of competing with Uber, Skyryse, Blade and others who seek to offer customer-facing UAM services. Asked what the company hopes to accomplish with its urban aerial rideshare display at CES, Drennan said he hopes people will be able to envision themselves using such a service and perhaps express that desire to their local politicians.

Bell might also estimate it has a better chance than Uber at scoring partnerships with cities, given the wide delta between Uber’s track record with cities — or its relatively little experience with aircraft — and Bell’s status as one of the four largest helicopter OEMs, with a long history of manufacturing safe military and civil aircraft, albeit less customer-facing operational experience.

There are many obstacles to the path that Bell has chosen, including that aerospace companies aren’t historically effective at rapid software development — arguably one of Uber’s core competencies. Bell’s timeline for certification of its aircraft and deployment of operations is also years behind other eVTOL developers, such as Joby, Lilium, Volocopter and eHang. The company would likely argue its aircraft will be safer, more efficient and better suited to the UAM mission than multicopters under development by the latter two OEMs, but only time will tell if there is a tortoise-and-the-hare analogy to be made here.

One thing is for sure: Bell is confident it has a winning hand for the urban air mobility market, and in 2020, expect the company to ‘raise’ the competition — not call.