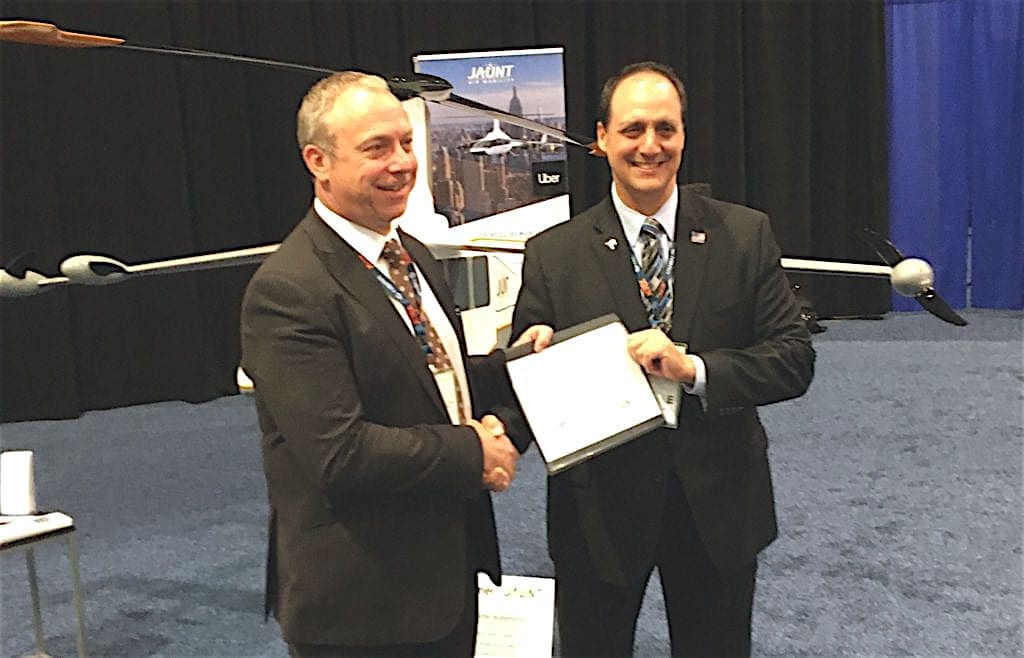 Under the agreement, signed at National Business Aviation Association (NBAA) Business Aviation Conference and Exhibition (BACE) 2019, Triumph’s Aerospace Structures unit will “support Jaunt’s efforts to design, develop, certify and build a full-scale demonstration aircraft” intended for urban air mobility operations. Jaunt’s aircraft uses a proprietary technology to slow the speed of its main rotor during cruise flight, which the company believes will be instrumental to enabling lift with a lower acoustic signature than traditional helicopters.

“We couldn’t have a better partner than Triumph that has the experience in building large airframe structures for some of the largest aircraft manufacturers in the world,” Kaydon Stanzione, CEO of Jaunt told Avionics International.

Though the terms of the agreement weren’t disclosed, executives from Jaunt and Triumph made clear they agreement extends past the certification process to ramping up large-scale manufacturing of the vehicle. Jaunt has also partnered with Honeywell for avionics, navigation, flight control, an electric propulsion system and connectivity solutions.

“It’s not a serial approach … it’s going to be a simultaneous program, and that’s what is going to compress the overall timescale,” he added.

Jaunt is one of Uber’s six announced vehicle partners aiming to launch commercial aerial ridesharing by 2023, and one of many air taxi developers planning to produce its aircraft at a rate that far exceeds typical industry production. Some competitors, such as Joby Aviation, have pursued partnerships with automakers — in Joby’s case, Toyota — with deep experience mass-producing vehicles.

“Triumph has some really innovative technologies that are going to allow us to increase the production rate as we start increasing the up-tempo as we’re building airframes,” said Stanzione. “That becomes very important to meet the demand of the urban air mobility needs, not just here for our Uber partner, but on a global scale.”

“We know we can easily meet that demand with Triumph, but the key piece is we’re going to be able to exceed that as we move into years two, three, four and five, because that’s where the huge demand is going to come in — around years four and five — where we’re going to need to be producing roughly 2,000 aircraft a year,” Stanzione said. “Triumph is going to get us there quicker, and most importantly, it’s got to be affordable.”

Triumph has been investing in advanced manufacturing technologies and automation to meet those sky-high production rates, according to Peter Wick, executive vice president for Triumph Aerospace Structures, which has been producing [reinforced thermoplastic laminate] parts in Spokane, Washington, for the Airbus A350.

“What we’ve done is establish an R&D lab in my Red Oak facility just south of Dallas,” Wick said. “That’s an established large structures manufacturing site … but the focus here for Jaunt is we have the scale in Red Oak — it’s about an 850,000 square foot facility — to be able to evolve this program into production. We’re doing the technology development actually in Red Oak, building on the RTL composite, the thermoplastic manufacturing we’ve been doing.” 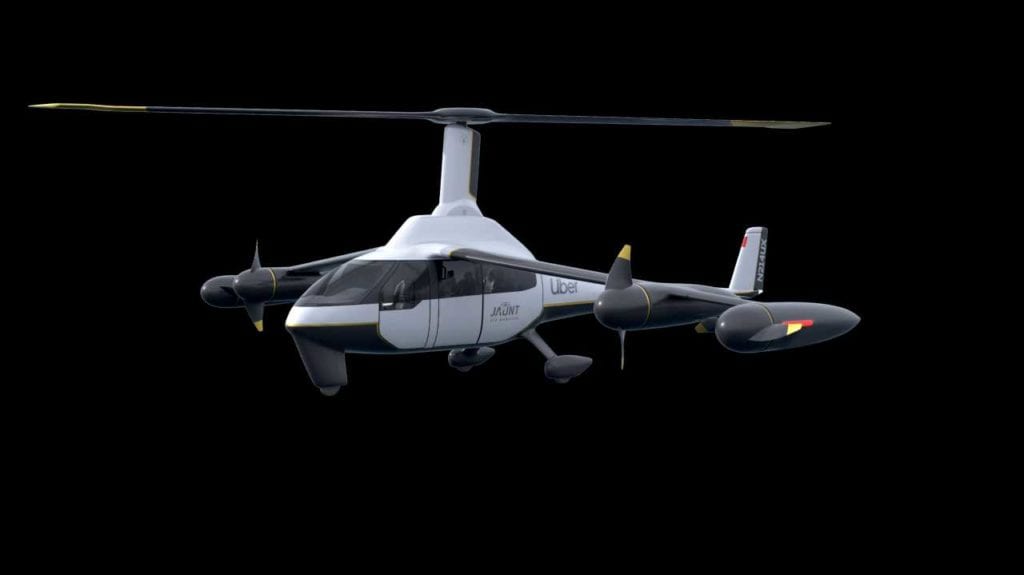 Triumph hasn’t manufactured product at the volume Jaunt is looking to achieve, Wick said, but the company currently delivers over 700 thermoplastic components per day for the A350 and more than 100,000 thermo-acoustic insulation systems per month for Boeing.

“The point simply is that we are no stranger to volume production in my business,” Wick added.

“It’s now all about making sure we’ve got the right kind of research being done into the right processes that will achieve the kind of throughput that’s required,” Wick said. “So it’s all going to be about automation. I’ve got my first robotic welding capability already operating in Red Oak as we speak. It’s not at a [technology readiness level] yet that is going to satisfy rate manufacture, but we are on the right path on the journey on this.”

“That was the key piece [for this partnership,” added Stanzione. “When we need Triumph to be there, they’re going to be there, because they’ve already made the commitment and the investment even prior to our association with them. They have the future vision to know that they’re going to need to have this capability.”

Engineering services will take place at Triumph’s Technology and Engineering Center in Arlington, Texas, and final assembly of Jaunt’s demonstrator vehicle will occur at the company’s manufacturing site in Red Oak, Texas. Triumph wouldn't comment on whether the agreement would allow them to partner with other eVTOL aircraft developers.

Thales to Supply US ILS420s