TAP Portugal is increasingly flying more passengers on a monthly basis, launching new routes and adding new aircraft to its fleet as it continues a transition from operating primarily as a legacy state-run airline to a modern low-cost long-haul carrier. During the recent Boyd International Aviation Forecast Summit (IAFS), Avionics caught up with TAP Portugal Chief Commercial Officer Trey Urbahn to discuss the company's new aircraft and investment strategies around connectivity.

What strategic initiatives is TAP Portugal taking to position itself as a low-cost long-haul airline?

Lisbon is at the edge of Europe so Portugal has a privileged position geographically to serve the trans-Atlantic markets, traditionally TAP has been focused on Brazil we fly to 10 cities in Brazil.

We’re a network carrier and I’m a revenue guy, so I came in and focused on restructuring the network. It's a hub-and-spoke model, as we believe it is the secret to really making low-cost long-haul work. I think point-to-point works in really big markets.

We’re one of the first airlines to introduce no bag fares for long-haul flying. At the end of the day, bags, food service changeability, miles — all of these things are elements of a legacy product that we’re unbundling.

We’re taking content out and making it so that you pay for what you need and not what you don’t need. The net effect of that is we’re much more able to compete with low-cost carriers within Europe as they increasingly enter the trans-Atlantic market.

TAP Portugal is the launch customer for the A330neo and operates an all-Airbus fleet, including new aircraft on delivery as the result of a major 2015 order. What type of customizations is TAP making to its newest Airbus aircraft?

We’re investing in a product that allows us to compete with Ryanair, EasyJet and others, and we’re doing that by expanding seating in our airplanes. We’re adding 12 seats to the A319s and A320s, and 16 to the A321s. All of those seats are being installed behind the wing, and that will allow us to establish a low-cost pricing structure for up to 60% of seats on those airplanes. The new seat has a fixed back with a 28-inch pitch, and it’s a pre-reclined seat.

Additionally, we’ve expanded the legroom on seats in front of the wing, so we’ll have a 34-inch pitch economy product, and then a convertible business seat that can be one row or 10 rows depending on demand.

That gives us a lower cost product where we can compete point-to-point, and we can upgrade people who are willing to pay for a better experience.

In 2018 we’re going to upgrade the premium cabins as well. We’re a segmented airline, and we serve premium passengers international, so we need to have a superb premium product. To that end we’re investing in lie-flat seats across our fleet. We have a value-driven customer that demands the lowest price, and we want to be able to establish a price point that attracts them.

Are you making any investments into new in-flight connectivity technology?

All of our long-haul aircraft are fully connected. We have not yet made a decision for our European fleet on connectivity. We have plugs in seats and stands for iPads, but we have not made the decision to provide internet yet because what works in the U.S. doesn’t really work well in Europe. There’s not an economic model in Europe that works for us right now.

Is it difficult to establish a profitable business model around providing in-flight Wi-Fi for intra-European flying?

The customer’s expectation is that it’s going to be free, and if I provide it for free, it ends up costing a lot of money because I have to pay for the bandwidth. It’s not so much the cost of the equipment and installation, it’s more about the bandwidth.

With internet, if only 5% of passengers are going to pay to use it, that type of demand is not enough to justify the investment in bandwidth. We’d have to charge for it or incur a much higher seat cost, which is the opposite direction we want to go. I don’t want to have you who wants to pay 49 Euros to fly point-to-point to have to bare the cost of an internet capability, capital cost and usage cost that you’re not personally going to use. That’s what we’re struggling with. Clearly the market is moving there. Do customers want internet on board? Of course they do.

On our European fleet, we have a decision to make as to whether we will invest in connectivity. At this point, I haven’t seen a business case that justifies it.

What is your biggest focus operationally going into 2018?

We’ve focused on re-structuring the network, re-structuring our pricing strategy and our fleet strategies, so we’ve done the low-hanging fruit. Now we have to go after our cost structure, which is harder to do.

We have other opportunities to reduce our operational costs that are efficiency-driven, but that takes a long time to do. 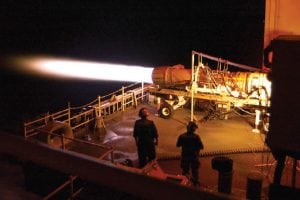