ThinKom Looks to Grow its Antenna Tech Across the Aviation Market

[Avionics Today 02-19-2016] The demand and adoption of antenna technology for In-Flight Connectivity (IFC) provider Gogo’s 2ku product has helped to transform ThinKom from an antenna Research and Development (R&D) organization to a high-volume antenna manufacturer. The company worked to develop technology that could increase efficiency by five times what previous systems could offer, according to ThinKom CTO Bill Milroy, who anticipates the company’s antenna tech could spread to other areas of the aviation industry.

ThinKom found its niche as the exclusive antenna supplier for Gogo’s new satellite-based 2Ku service for the commercial air transport market. The company is contracted to deliver its Ku-band mechanically steered antenna, ThinAir Falcon-Ku3030, to a backlog of 800 aircraft that plan to equip with the solution, which Gogo’s CEO Michael Small promises will deliver 100 Mbps or better per plane when it comes online sometime in 2016.

The contract will keep the antenna provider busy for the next two years equipping aircraft for major airlines such as Delta, which is installing the technology on 250 aircraft by 2018. And with commercial IFC adoption on the rise — with a 2015 Gogo survey reporting that 74 percent of U.S. passengers and 83 percent of airline passengers outside of the U.S. are interested in accessing in-flight Wi-Fi — Milroy sees the advent of IFC both growing business and pushing antenna developments over the next few years.

“The commercial airline’s [In-Flight Entertainment and Connectivity] IFEC adoption over the last two years has been significant and it is widely believed that the vast majority of the IFEC decisions will be made over the next few years,” Milroy told Via Satellite, noting that the demand has placed antenna technologies in the spotlight to determine which ones are “proven and available, affordable, high performance and efficient, have a low Size, Weight and Power (SWaP), reliable, aesthetically pleasing and offer a low-cost of ownership.”

“ThinKom’s Variable Inclination Continuous Transverse (VICTS) antenna technology exploited in the Gogo 2Ku product is unquestionably applicable to other areas of aviation, including both business and regional jets. These markets will be part of a natural progression as the airlines complete outfit of their commercial fleets and customer demands and business cases align,” said Milroy. “Because these platforms have a narrower fuselage and more restrictions relative to indoor antenna equipment, the antenna systems will be smaller and more highly integrated.”

He anticipates the regional jet IFEC market will likely see earlier adoption as airlines will want consistency across all routes. Business aviation also has a large addressable market, according to Milroy, and some planes can achieve satisfactory connectivity by adding small tail-mount antenna solutions.
The stringent regulatory requirements in the aviation market could prove an obstacle to the company as it looks to address the more fragmented market of mid-size jets, super mid-size jets, large jets and VIP airliners, however.

“The biggest challenge we have experienced in the airline industry is time-to-market as the systems are complex and the regulatory requirements and qualification efforts levied by the Federal Aviation Administration (FAA) are very stringent,” said Milroy. “[Standard Type Certificates] STCs and sales efforts are very expensive and are more efficiently amortized over a larger fleet,” he added, speaking about the fragmented business jet market.

ThinKom’s antenna hardware can also be configured to support Ku or Ka-band connectivity. Milroy notes that with Ku as a “here-and-now” solution, demand will continue to remain strong, but that there has been significant growth in the Ka-band market as a regional solution. He expects that Ka-band will continue to expand and become more global in the next three to five years, but that because of the spot beam High Throughput Satellite  (HTS) architecture, Ka-band services are also highly proprietary networks whereas Ku service providers have more flexibility to incrementally grow capacity in high-demand areas.

As demand for aircraft connectivity continues to increase, the company is also adjusting its antenna technologies to fit new needs, including the trend for geostationary systems to work over wider tunable and instantaneous bandwidths to gain full “universal” global capability with every type of satellite — both HTS and Fixed Satellite Service (FSS). 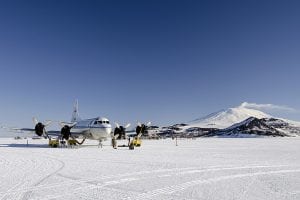