[Avionics Today 11-02-2015] Inmarsat will locate the Satellite Access Station (SAS) for its European Aviation Network (EAN) high-speed in-flight connectivity solution in Greece, under an agreement with OTE, a Greek telecommunications provider and member of the Deustche Telekom Group.

The development of the SAS in Nemea, Peloponnese, will be a key infrastructure milestone for EAN, which Inmarsat unveiled last month as the first aviation passenger connectivity solution in Europe to combine an advanced satellite network and LTE-based ground network, the latter of which will be operated by Deutsche Telekom.

Aircraft will switch automatically between satellite and terrestrial connectivity using an onboard network communicator for optimal service delivery. As a result, airlines will be able to offer reliable, high-speed onboard Internet access to passengers across Europe’s high-traffic flight paths, using Inmarsat’s 30MHz S-band spectrum allocation in all 28 European Union member states, according to the company. 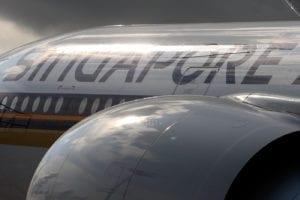 Singapore Airlines to Have Fleet Fully Connected by 2021