Technology Company of the Year: Gulfstream

Gulfstream Aerospace had a strong 2014 with numerous highlights. The company introduced the Gulfstream G650ER as well as the all-new Gulfstream G500 and G600. With a range of 7,500 nautical miles at Mach 0.85 and 6,400 nautical miles at Mach 0.90, Dan Nale, senior vice president of programs, engineering and test at Gulfstream, claims the G650ER is capable of flying farther and faster than any other business jet on the market.

The G650ER is an extended-range model based on the G650, so the two aircraft leverage similar technologies. Nale says there are now more than 120 G650 and G650ER aircraft in operation around the world. In terms of technology, the G650 and G650ER feature the PlaneView II flight deck in front and the Gulfstream Cabin Management System in back. PlaneView II features large landscape displays that show navigation charts, moving maps, and real-time weather conditions alongside the primary flight display. A Gulfstream-designed Cursor Control Device brings point-and-click functionality to the flight deck, allowing pilots to quickly call up checklists, approach charts and systems data. The Gulfstream Cabin Management System allows passengers to control their cabin environment — from the entertainment options to the window shades — with the touch of a finger on their smartphones, according to Nale.

The G500 and G600 also include the Symmetry Flight Deck with its 10 interactive touchscreens and active control sidesticks (ACSs). “The touchscreens introduce the swipe capability to aviation and provide an operational-based Phase of Flight design. This automatically provides the crew with the most likely functions needed for each phase of operation, following the aircraft through start-up, taxi, takeoff, en-route, and arrival phases. The Symmetry Flight Deck is the first application of extensive, fully integrated touchscreens in civil aviation,” Nale says.

In terms of its roadmap for 2016, Gulfstream will be developing technologies for its new G500 and G600 programs, with an eye toward enhancing the technologies available for its existing aircraft platforms. The company has recently received Federal Aviation Administration (FAA) approval to install the next-generation Satcom Direct Router, an enhancement that simplifies cabin communications on Gulfstream G550 and G450 aircraft.

“The equipment elevates the airborne office to a new level by allowing for more communications options in the cabin, including one that allows passengers to use their personal smartphones to call and text in flight. Just as they would if they were on the ground, outgoing calls show the passengers’ personal phone number and incoming calls display the number of the person calling them. The functionality is seamless, secure and available at any altitude, virtually anywhere in the world,” says Nale.

Standing “head and shoulders” above his peers, Tony Howerton, crew chief of avionics shop 260-5 at American Airlines, uses his keen eye and strong work ethic to ensure no imperfect aircraft leaves the shop. According to his supervisor, Richard Lyon, in a shop that is responsible for repairing and testing 25 percent of American’s avionics components, which equates to more than 500 different company part numbers, ensuring constant quality and reliability is no easy feat.

“His eye for detail and commitment to his job has prevented many units going out to an aircraft when they shouldn’t have,” said Lyon. “Having been a mechanic prior to becoming a crew chief, Tony acquired knowledge and a skill set that allows him to effectively lead his crew. Tony is probably one of the best trouble shooters I have ever seen and, by passing that knowledge on to members of his crew, he makes them better mechanics.”

Howerton is always looking for innovative ways to increase efficiency across the shop and leads the charge for Continuous Improvement initiatives. In this role, he led efforts for the entire Component Repair and Overhaul (CRO) organization, made up of 19 components shops. He has also been instrumental in reducing the backlog of parts significantly in a relatively small timeframe and has managed to keep the backlog down since achieving the drop.

Howerton says he learned early on in his career that he “cannot do everything or change everyone,” and therefore focuses his efforts on working as hard as he can to accomplish what he can each day. “I want those things that are critical to our operation to be achieved by the end of the day and to know the difference. I would like to leave here one day and look back and know that I left it better than I received it. I would like to think that those who I have worked for felt like we had a good working relationship and together accomplished those things that were necessary and more.”

And according to Lyon, Howerton is achieving his goal every day.

“The culture of the shop has changed as a result of Tony,” said Lyon. “He initiates positive change and brings forth issues that need to be addressed that affects the entire Avionics group.”

ViaSat won the In-Flight Connectivity Avionics Excellence Award, up against some fierce competition. The company has made a big play in the aeronautical sector, and signed deals with the likes of JetBlue, El Al, and United Airlines. In terms of what it thought its number one achievement in 2014 was, Don Buchman, vice president and general manager, Commercial Mobility Business, ViaSat said he believed ViaSat helped changed the perception that In-Flight Connectivity (IFC) was a fee for service that only 6 to 7 percent of people actually wanted to use. Buchman believes ViaSat showed that the general flying public wanted Wi-Fi and would use it, embrace it and see value in it.

“The way we presented it to the marketplace was that it wasn’t just a service for those who have a bastion for expense reports and spend $15-20 and then expense it back to their company. It really is valued by all flyers,” he says.

It is also set to be a big year coming up for ViaSat in this area, as it launches its much talked about ViaSat 2 satellite next year, bringing a whole lot more bandwidth to aero customers. “The key breakthroughs that we have had have been down to the fact we have had the highest capacity pipe to the aircraft with the best economics. So, ViaSat 1 was that. With ViaSat 2 we are taking that next technological leap and launch ViaSat 2 which has twice the economics and seven times the increase in the available footprint,” says Buchman. “One of the things in the past is that the satellite industry said you could have capacity or you could have coverage. ViaSat 2 says you can have capacity and coverage. That is a big breakthrough. You are going to see that really start to change the dynamics of the marketplace.”

While ViaSat has only signed a handful of contracts so far, Buchman believes there is the potential for a lot more over the next one or two years. “We have a lot of airlines who have chosen first generation technology, and those contracts are coming to an end. Since we are in the market, we do expect a lot of activity around upgrades. So, it is next 12 to 24 months? I would say this is the right timeframe to expect this kind of activity. As far as big as this market for ViaSat, we are in the business of delivering the Internet with good economics to really difficult, hard to reach places. I have heard forecasts from this market from anything from $2 billion to $5 billion in 10 years. We think we are in a good position to capture the lion share of that,” he says.

ViaSat wants to continue to turn heads in 2016, and change the perception of in-flight broadband. “It does not have to be expensive or slow. We don’t think that is right,” Buchman says. “We want the market to think it can be fast and affordable, and that is the direction we are heading.”

Robert B. Wood has more than 35 years of experience working in the aviation industry beginning at a startup called Flight Dynamics in the mid 1970s prior to transitioning to Rockwell Collins where he currently serves as director of engineering leading a team of 250 engineers. Over his career, Wood has obtained more than 20 related patents in the field of holography, Heads-Up Display (HUD) technology, as well as in Enhanced Vision Systems (EVS). It is not a stretch to say the safety record as a whole throughout the commercial air transpiration industry has been directly impacted by his visionary role in supporting the development for the foundation of some of today’s more advanced HUD technology.

“The original concept at Flight Dynamics was to provide commercial airline pilots with a HUD coupled with an [Infra Red] IR sensor to help see at night and in bad weather. Due to immature IR technology at the time, the original concept morphed into a HUD that provided all information needed by a pilot to operate and land in CAT III low-visibility conditions, including a precision fully monitored guidance cue,” says Wood. “The guidance control law development, along with all the associated systems and SW developments were completed in 1984, which led to the first FAA certified HUD guidance system in 1985. Alaska Airlines was the first airline to purchase the product for their fleet of 727 aircraft.”

During his earliest days at Flight Dynamics, he was involved in developing a number of exposure and manufacturing methods for producing holographic combiners that were used in all of the company’s HUDs through 1996. By simplifying the design of the combiner, the company was able to improve the yields needed to keep the system cost down, Wood says. Many of those combiners are still flying on HUD technology today, primarily on Boeing 737 Classics, Bombardier Dash-8s, Lockheed Martin C-130Js and Dassault Falcon 900 jets.

“I helped to develop an easily interpretable symbology format for unusual attitude identification and recovery, which is still in all of our products today. Some of the more recent patents are related to the optics used on our new technology Compact HUD and EVS sensor which are now in the final phases of certification,” said Wood. With each successive generation HUD introduced to the market, Wood worked with other Rockwell Collins engineers to reduce the number of system Line Replaceable Units (LRUs). That led to an LRU reduction of six total on the Boeing 727 to two total on today’s Boeing 787 Dreamliner.

“The later generation all digital systems use LED illumination, substantially improving reliability and reducing system power. The decisions to migrate to newer technologies over time were primarily internally motivated, but in some cases, customer requirements drove the decisions,” said Wood. 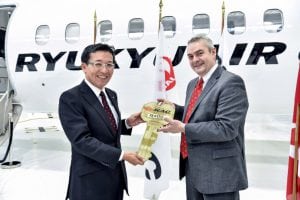