Congressman Frank LoBiondo (R-N.J.), chairman of the House subcommittee on aviation, kicked off the conference, saying the industry has made a lot of progress on NextGen, but faces many challenges ahead, not the least of which is sequestration and other budgetary challenges, and bipartisanship in the Congress. “We’re not building runways. We have to find a way to be more efficient. NextGen is essential, and it’s critical that we find a way to move forward,” he said.

In the United States, with the 2020 automatic dependent surveillance-broadcast (ADS-B) Out mandate looming, avionics manufacturers, installers and operators are working to get systems developed, certified and installed, which is an enormous challenge, conference panelists said. International mandates, including one in Australia at the end of 2013 and in Europe in 2015, further complicate the equipage picture for operators.

Capt. Brian Will, director of airspace modernization and advanced technologies at American Airlines, said return on the investment of the equipment and training is a key piece of the NextGen puzzle. And the delayed use of purchased capabilities is expensive.

“When you put all this stuff on the airplane and you don’t get to use it, and see the benefits we’re hearing about, then it is costing us something. … The longer it takes to get these things accomplished, it is costing us up here real money, every day,” said Will.

United Airlines, JetBlue, American Airlines and Delta Air Lines, who were represented on the Airline Roundtable panel at the conference, have all participated in various NextGen trials, and reiterated their commitment to this multi-billion project. JetBlue, for example, said in 2012 it installed ADS-B Out on 35 of its A320s; and in April 2013, completed its first installation of ADS-B In. Additionaly, Delta Airlines launched a program to upgrade its MD80s with NextGen-capable avionics. American Airlines has earmarked about $3 billion, not counting new aircraft purchases, for NextGen fleet renewal.

“It’s not just about JetBlue; it’s about the airspace itself. If we can move more aircraft through the airspace that benefits everyone,” said Capt. Bill Allen, director of operations at JetBlue Airways.

But all the panelists agreed it is now time to move beyond the trial phase of programs and enter the deployment and implementation phase.

“Delta is committed to NextGen. We’ve committed vast amounts of resources to it. We believe in it,” said Chip Beall, technical pilot at Delta Airlines. He further suggested changing the idea of “best equipped, best served” to “best operationally capable, best served.”

The business case for operators is still a tenuous one; airlines face stringent return-on-investment scenarios from their chief financial officers, and general aviation operators still see 2020 as a long way off and are putting off their equipage plans. However, in both the air transport and general aviation cases, the industry needs do a better job of more clearly outlining the business case and the equipment standards needed for operators, according to conference panelists.

“Equipment and equipage and taking advantage of the capabilities that that equipment offers is certainly at the forefront of the operating community’s mind, especially the general aviation community,” said Heidi Williams, vice president of Air Traffic Services and Modernization, Aircraft Owners and Pilots Association (AOPA).

General aviation operators are approaching NextGen equipage with a different focus than their air transport counterparts. Specific components of NextGen, namely ADS-B, wide area augmentation system (WAAS) GPS and weather in the cockpit, are particularly applicable to general aviation operators, according to speakers on the panel, NextGen for General Aviation: What Equipage Looks like for the Private Operator. In fact, NextGen is not the impetus for many equipment upgrades in this space, according to John Uczekaj, president and CEO of Aspen Avionics it’s cost and safety.

“What’s interesting about our end of the market is that it’s not really about return on investment; it’s not about anything other than what is it going to do for my airplane. The big thing for the people in our market is what do I need as the bare minimum, and that’s ADS-B Out and that you can get with a transponder upgrade in many cases,” said Uczekaj.

There are still many questions about what exact equipment is required, what mandates are applicable, and what benefits will that equipment yield, specifically in the GA community.

“We have a lot of challenges ahead of us, but certainly the NextGen environment has created a lot of demand for avionics, and as an avionics manufacturer, we like that quite a bit,” Uczekaj added.

The fourth annual Avionics for NextGen conference will be held Sept. 23, 2014, at the Sheraton in Atlantic City, N.J. Visit www.avionicsfornextgen.com for more information. 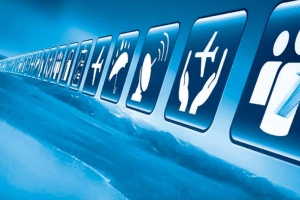 Gogo Announces Expanded Datalink Services and Apps in the Cockpit