Operators on the ground and the pilot in the Cirrus SR-22 used Sagetech XP transponders to broadcast ADS-B position messages via Wi-Fi to an iPad with the Hilton Software WingX EFB app.

"Even when I couldn't see the UAV visually from the cockpit, I could see it electronically on my iPad, including its heading," said Kelvin Scribner, the pilot of the Cirrus SR-22 and president of Sagetech. "And it was right there on the aviation charting app I already use in flight, Hilton Software’s WingX.”

"As an operator, this is exactly what I need. I could see deploying it next year,” said Brian Whiteside, president of VDOS, an Oregon company that provides data operations support for unmanned aircraft. Whiteside was present at the recent demonstration, and was able to track both aircraft on his smartphone. 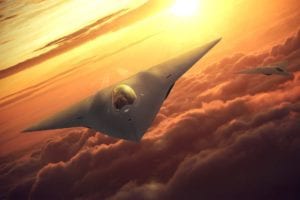