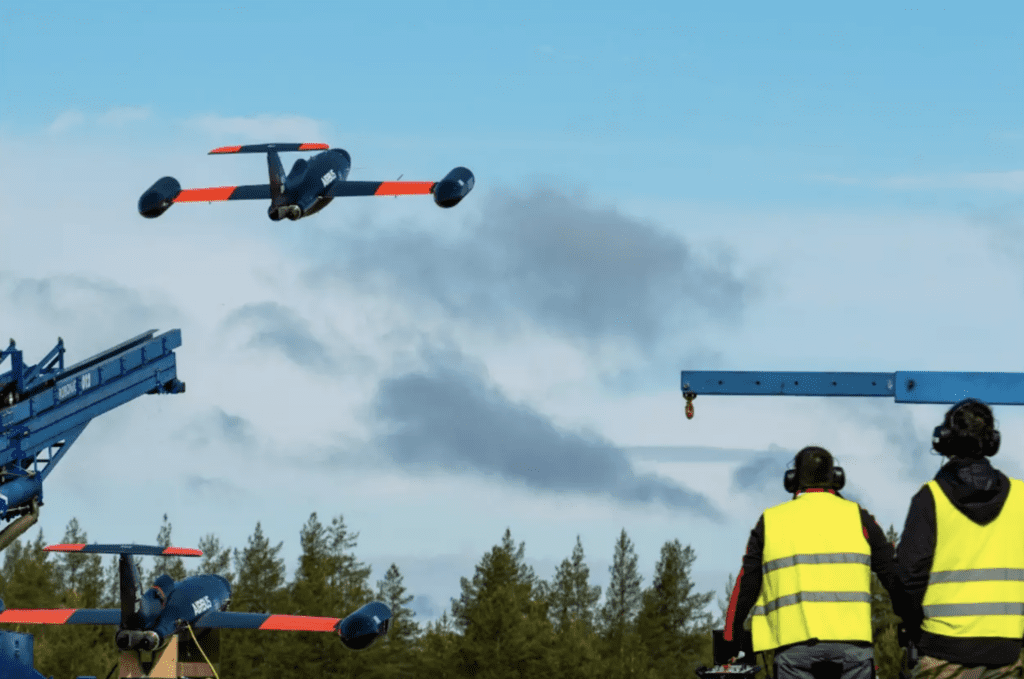 Two fighter jets, a helicopter, and five drones participated in a large-scale flight demonstration of manned-unmanned teaming. Experts from Airbus led the multi-domain demonstration in partnership with the Bundeswehr, the Finnish Defence Forces, MBDA Germany, Patria, the startup HAT.tec, and Robonic—provider of drone launch systems. The demo is part of a project intended to pave the way for the Future Combat Air System—a European combat system of systems being developed by Airbus as well as Dassault Aviation and Indra Sistemas.

Jean-Brice Dumont, Head of Military Air Systems at Airbus, remarked in the company’s announcement that they demonstrated “manned-unmanned teaming capabilities and functionalities with up to ten connected assets work in a real-life inspired scenario and under near operational conditions.”

The five unmanned aircraft systems, also referred to as remote carriers, were modified Airbus Do-DT25 drones. The team equipped two of the drones with MBDA’s Electronic Support Measures (ESM) sensors. These sensors were used to detect the positions of ground air missiles included in the scenario. The other three remote carriers used Electro Optical cameras to visually confirm the position of the air defenses.

Patria, a networking data link provider, ensured that all assets in the flight demo were connected. The crew onboard the helicopter, an Airbus H145M, teamed up with one of the drones with an Electro Optical camera, to assist in the mission.

Airbus just signed an initial contract with German procurement agency BAAINBw, and Phase III of the Future Combat Air System Manned-Unmanned-Teaming Demonstrator project will begin soon. The project is designed to develop combat aircraft and remote carriers to enable operations in the 2030s and to mature existing capabilities for teaming.

The Future Combat Air System (FCAS) will feature remote carriers operating as a team with the New Generation Fighter and the Eurofighter. According to Airbus’s announcement, these drones will “provide better protection for pilots while enhancing the operational envelope and the ability to act in risky situations.”

In 2018, when Airbus and Dassault were in the earliest stages of planning for FCAS, Dirk Hoke—the Airbus Defense and Space CEO at the time—remarked, “Today’s systems and future systems need to be working hand-in-hand in real-time connectivity and connection and communication that needs to include artificial intelligence to steer swarms of drones and connect the different platforms on information. There is a huge change in the warfare of the future.”

A video of the multi-domain flight demo can be viewed along with the Airbus announcement here.

The Bundeswehr, Airbus, the German Aerospace Center DLR, SFL, and Geradts performed the first successful launch and operation of a remote carrier flight test demonstrator from a flying A400M UAV Launcher, Airbus shared this week. The A400M military transport aircraft will be able to bring as many as 50 remote carriers to an area of operation and launch the vehicles.