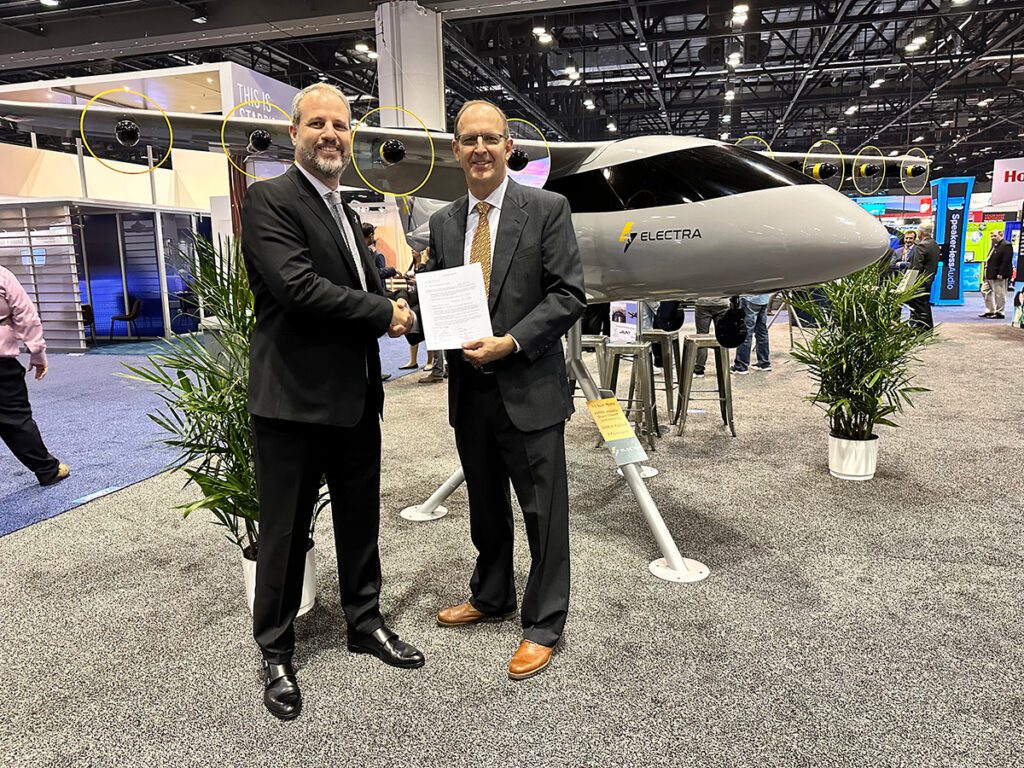 Electra.aero and Welojets signed a letter of intent at the NBAA-BACE this week. Welojets has placed an order for 32 eSTOL aircraft from Electra. (Photo: Electra.aero)

ORLANDO, Fla. — Electra.aero signed a letter of intent with Welojets for 32 eSTOL (electric short take-off and landing) aircraft. The LOI was signed at the National Business Aviation Association (NBAA) Business Aviation Convention & Exhibition (BACE) this week. Electra’s order book now totals 1,000 aircraft, valued at more than $3 billion, and includes 27 customers. In addition to Welojets, other customers include Tailwind Air, MintAir, Skyportz, and Bristow Group, among others.

Welojets is a private air mobility provider of business jets in Europe and North and South America. Alfredo Lisdero, President of Welojets, commented on the announcement, saying, “We plan to fly the Electra eSTOL aircraft into existing airports as well as use it to expand our operations into new markets that cannot be served currently with traditional fixed wing aircraft.”

Electra acquired another eSTOL company, Airflow, at the beginning of June. Marc Ausman, Chief Product Officer at Electra, was previously the CEO of Airflow. “We’ve taken the best of what we each learned individually and put that together into defining the requirements of the aircraft,” he told Avionics International in an interview at NBAA-BACE.

“We have been moving forward with one aircraft,” Ausman added. “As part of the development process, we have a technology demonstrator aircraft that we’ll be flying in the first part of next year, then there will be a pre-production aircraft, then a production-conforming aircraft. Entry into service will be around 2027.”

Initial use cases for Electra’s aircraft will be conducting flights on existing routes to replace older aircraft. 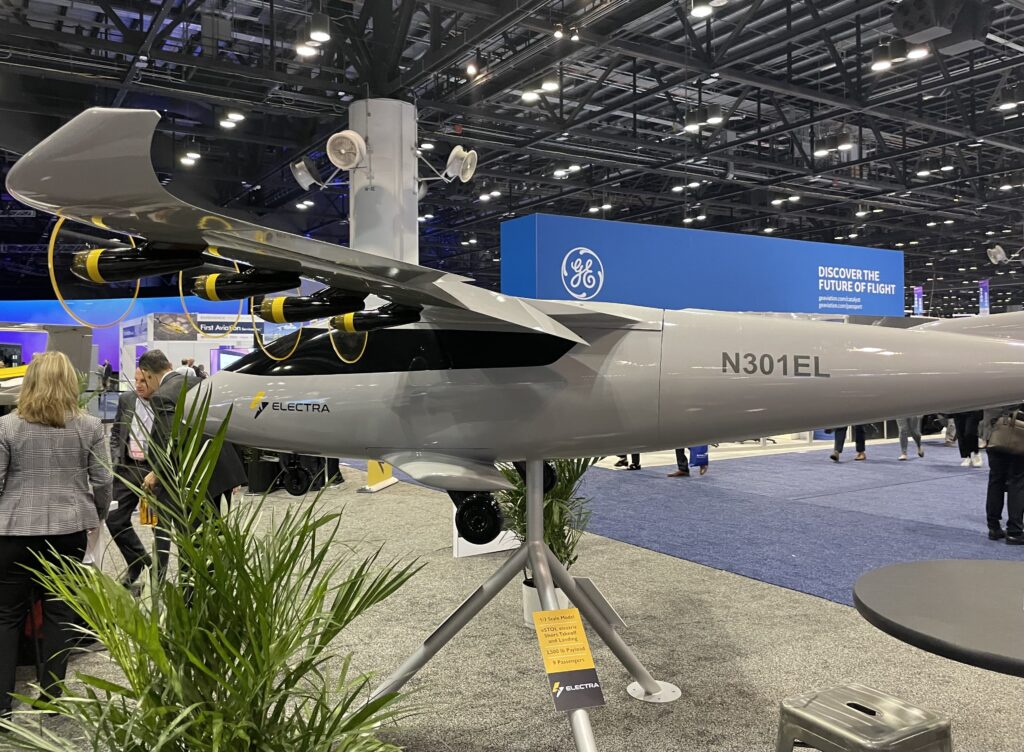 Electra’s team is currently working to determine the requirements of the market for their aircraft. A supplier for the fly-by-wire system has been selected, Ausman shared. “It will have the latest glass cockpit displays, and even though there are eight motors, it will have a single throttle or power lever.”

The eSTOL aircraft will include capacity for a pilot and co-pilot, although it is certified for single pilot operations. “A lot of our customers said they like to carry a second pilot to train new pilots,” he said. “There’s a lot of pilot training going on now.”

Electra developed an STOL concept rather than a vertical take-off and landing (VTOL) aircraft to avoid some of the issues that come with certifying a VTOL model. Operators, customers, and regulators are all familiar with aircraft that take off and land from a runway.

“This is a very conventional aircraft in many ways,” Ausman remarked. “It’s a fixed-wing aircraft with fixed landing gear, very standard in terms of how the fuselage and the cockpit is laid out.” 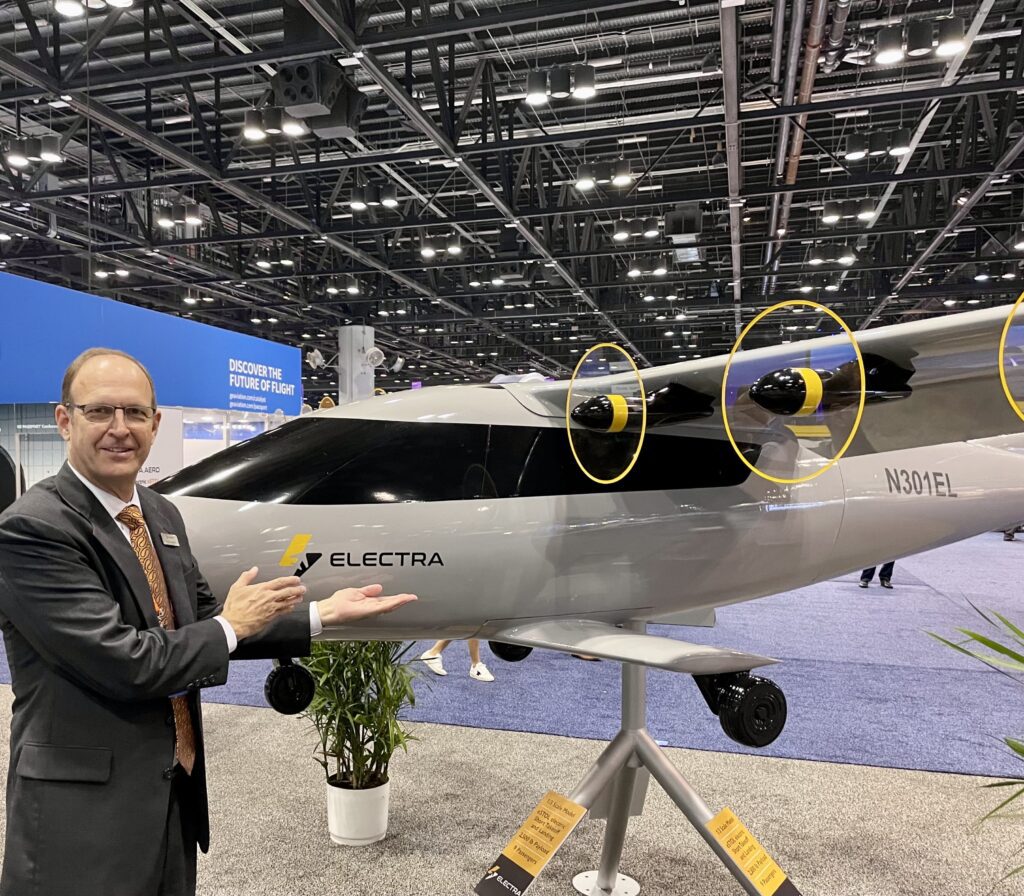 Electra’s eSTOL certainly incorporates new technologies, but many of the design decisions were made to minimize risk—both technical and regulatory.

The aircraft can operate using sustainable aviation fuel (SAF) or traditional fuel, meaning that electrical charging infrastructure is not required.

With the STOL capability, customers will be able to expand into new markets and develop the structure of their routes “in ways they can’t do with today’s aircraft,” he noted. “We offer a lower cost per seat mile, we offer quieter operations than traditional aircraft in this class, and we offer the ability to take off and land from a field the size of a soccer field, or a 300-foot runway length.”

The cost for passengers flying in an eSTOL aircraft from Electra.aero could be as much as 75% lower than flying in an aircraft that takes off and lands vertically.

Electra’s customers include those involved in the transportation of medical supplies, VIP travel, cargo options, and military applications. Ausman mentioned that Electra has been successful in receiving grants from the military to further develop their eSTOL technology. For example, AFWERX’s Agility Prime program within the U.S. Air Force awarded a $1.5 million contract to the eSTOL developer as a direct-to-phase II small business innovation research (SBIR) contract last year. A Phase III contract was awarded to Electra in February 2022. 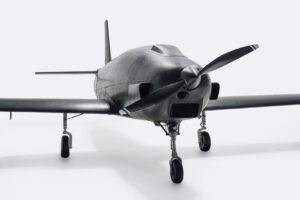 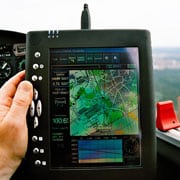 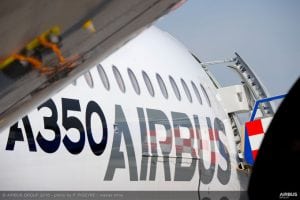