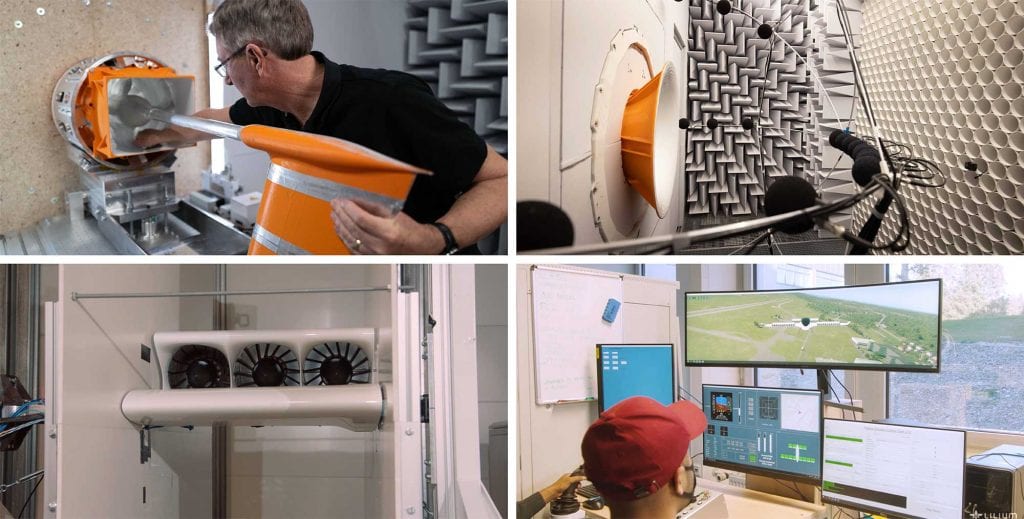 Lilium is testing components for its eVTOL aircraft which it hopes to certify with EASA and the FAA by 2024. (Lilium)

While many electric vertical takeoff and landing (eVTOL) aircraft makers have predicted a launch in 2024, few have detailed exactly how they plan to get there. In a recent blog post from Lilium, Yves Yemsi, Lilium’s chief program officer, and Bhavesh Mandalia, Lilium’s head of airworthiness, detail how the company’s 7-Seater Jet is expected to reach certification in just three years.

“Our choice to concurrently certify our aircraft with both EASA and the FAA demonstrates our commitment that Lilium’s service meets the most rigorous safety standards and is acceptable globally in markets that follow these certification standards,” Yemsi and Mandalia write in the blog post.

Lilium’s 7-Seater Jet design was announced in April and features an architecture based on efficient cruise flight for regional air mobility. The aircraft will have forward canards, main wings, and a distributed propulsion system with 36 individually controlled flaps each containing an embedded ducted fan.

While acknowledging the ambitions of its certification timeline, Lilium says it is on track to launch its eVTOL in 2024. (Lilium)

“Within these frameworks, our role in the development of the 7-Seater Jet is to collaborate with regulators to champion the design and demonstrate a robust process for the verification of applicable requirements,” Yemsi and Mandalia write in the blog post. “Lilium first applied for a Type-Certificate in 2017 through EASA and requested FAA validation as early as 2018 – and we’ve been working hand in hand with both authorities ever since.”

Yemsi and Mandalia acknowledge the ambitions of a 2024 entry into service goal in the post but say that they are confident in the program timeline. They detail the regulatory framework, aircraft complexity and novelty, aircraft size, and mission profile all as drivers of complexity and risk within a certification program.

“Our goal, therefore, has been to leverage existing aircraft design and certification principles, the inherent advantages of our aircraft architecture where possible, while at the same time actively working to mitigate downstream risks in areas that are novel or unproven in this new sector,” Yemsi and Mandalia write in the blog post.

Yemsi and Mandalia said Lilium is using about 30 times fewer parts than an average commercial airliner on its 7-Seater Jet. This will result in shorter timelines and fewer components to validate and verify.

The Lilium team has also followed a validation and verification (V and V) process where requirements are validated and cascaded down to the component level of the aircraft and then the aircraft is verified with a program of analysis, followed by ground and flight testing with regulators.

“This rigorous process is designed so that every single requirement can be demonstrated to the potential satisfaction of our regulators and allows us to leverage decades of well-established safety standards for aircraft development,” Yemsi and Mandalia write in the blog post.

The 7-Seater Jet’s next milestones will be to complete a preliminary design review, detailed design of all components, critical design review, component and systems build and test phase, assembly of its conforming aircraft, ground testing, and flight-testing campaign.

“We expect that our flight test campaign will rely on six or more prototype aircraft for testing to ensure our ability to efficiently test different configurations of the aircraft, and perform numerous flight tests in parallel,” Yemsi and Mandalia write in the blog post.

While there are many tasks to overcome before Lilium’s 7-Seater Jet is certified, Yemsi and Mandalia said the company is on track for the first flight of its certified aircraft and its launch in 2024.

“We are in ongoing and concurrent engagement with both EASA and FAA to understand the airworthiness requirements and agree on means of compliance for our aircraft as we develop them,” Yemsi and Mandalia write in the blog post. “These efforts help to guide our program development team. We are on track for the first flight of a certified aircraft and welcoming you on board in 2024.”

Lilium recently announced that it was partnering with Honeywell Aerospace for avionics and flight control systems for the 7-Seater Jet. Lilium has also announced Luxaviation Group as a partner to support its eVTOL operations in Europe.

Another Big Step Forward for ADB-B