Next year, the United States Air Force is looking to undertake a technology challenge to aid the FAA certification of air taxis, seen here in this NASA schematic. Photo: NASA

"One thing that's blowing minds in the Air Force is we're starting a program around flying cars," Will Roper, assistant secretary of the Air Force for acquisition, technology, and logistics, told an aviation cybersecurity forum at the Atlantic Council on Dec. 11. "Right now, I don't have a requirement for one [air taxi] in the Air Force, and your typical government procurer says if you don't have a requirement, then you don't work in it, but there's a market that's evolving that really needs to get certified to fly to build up the safety credentials so that we can lead the charge for this new industry base."

The Air Force is examining ways to lend its expertise to industry more broadly than in the past, including systems sharing, and the new, air taxi program will likely be a part of that effort.

"It doesn't occur to us in the Air Force that we certify our own systems, and we do so pretty quickly, and we have our own air space and our own ranges," Roper said. "We can fly things easily. Why aren't we influencing the development of this [air taxi] market in a way that will help the Air Force do missions, but that actually speeds up the development of the market itself? So we're going to be reaching out next year and doing a DARPA-like challenge on one of our military installations so that companies that can do missions for us now can get on a path to be certified by us, and we'll start flying and doing missions. I imagine that will speed up the FAA certification significantly when the Air Force says it's safe for us. That's an odd thought, right? We should be out influencing the direction of a mainly commercial market in a way that helps the military, but also helps accelerate that market. That's how we'll win the [innovation] competition."

The vehicle is to be unmanned, low-cost and capable of flying two to four military personnel 100 miles at speeds above 100 knots for combat search and rescue, personnel recovery, and special operations missions. Initially, it's not expected these vehicles would expand on the capabilities provided by other aircraft, except perhaps in reducing acoustic signature. Rather, the Air Force hopes to reduce costs through procuring "attritable," or relatively expendable, aircraft that have much lower operating and life cycle costs, Daniel Goddard, acting deputy director of the Aerospace Systems Directorate at AFRL, told Avionics International earlier this year.

“Some of these missions that we fly, especially just re-supplying a small team — you know, they may only be delivering 100 pounds of ammunition and water, and they may only go 50 nautical miles to do that,” Goddard said. “That’s a perfect application for a VTOL aircraft.”

It's worth noting that Air Force certification requirements — especially for a vehicle understood to be attritable — are likely to be far less stringent than those laid out for air taxis by the European Aviation Safety Agency earlier this year, which holds eVTOLs to the same standard as commercial airliners: less than one in a billion chance of catastrophic vehicle failure. The FAA has yet to indicate what safety standard it will hold air taxis to.

Roper made his remarks as the council released its second report on aviation cybersecurity since 2017, Aviation Cybersecurity: Scoping the Challenge, sponsored by Thales.

"We have an imperative to be part of the equation that keeps innovation in this country dominant," Roper said. "Innovation is a battlefield almost. If we go off and build the best tech to make fighters and bombers and whatever other kinds of airplanes we dream up in the future more secure, then we've played an underwhelming role."

In May, the Pentagon's Small Business and Innovation Research program unveiled an Air Force effort to develop a personnel recovery/transport vehicle that may dovetail with commercial urban air mobility efforts.

"In supporting the 2018 National Defense Strategy there is a need to deploy, survive, operate, maneuver, and regenerate in all domains while under attack in theaters throughout the globe," according to the May SBIR announcement.

"These diverse environments will require operations from new isolated locations, at greater distances, requiring low cost solutions for increasing our options for providing transport of small teams of personnel into and out of harm's way without increasing the number of personnel at risk (the aircrew) needed to move these teams," the announcement said. "There have been significant advancements in Short Take-Off and Landing (STOL) aircraft as well as traditional rotorcraft design that may provide solutions to the challenge. In addition, the significant private sector investment that could be leveraged for this military mission is the personal air vehicle (PAV) and urban air mobility (UAM) efforts. These efforts have been focused on urban operations for on-demand civilian transport and have many parallel design requirements to that desired under this SBIR but with some modifications to meet the military mission."

At the Atlantic Council on Dec. 11, Roper also said he wants the Air Force to disseminate its non-mission critical cybersecurity technologies to commercial companies--technologies such as those developed under AFRL's Agile and Resilient Embedded Systems (ARES) program. The latter features an embedded cybersecurity system for the service's drones so that drone experts "don't have to be cybersecurity experts as well to make their drones difficult to hack," Roper said.

"The idea that we can use Air Force research and development to stimulate a better commercial supply chain and industry base is a new idea," he said. "There's no process, no command that tells us to do that, but we need to." 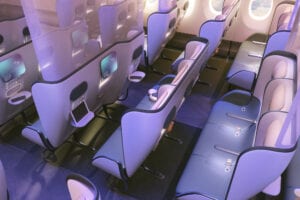 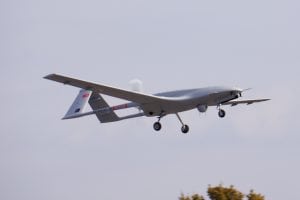