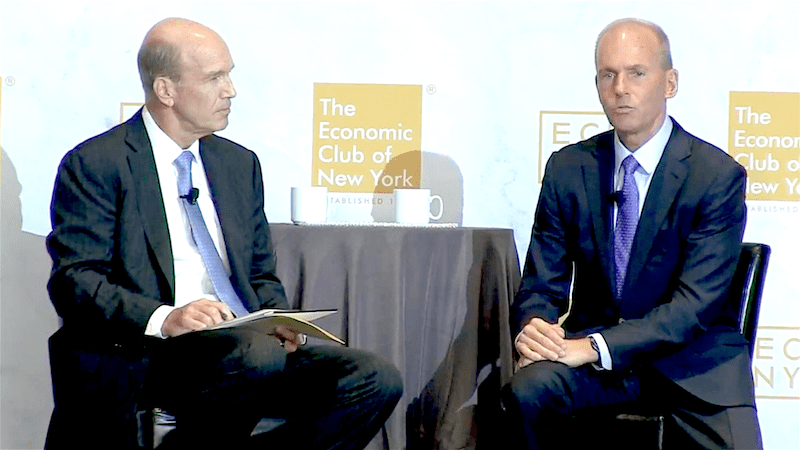 While the ultimate decision on when the grounded fleet of 737 MAX aircraft can return to service relies on the approval of individual civil aviation regulators, during a speech at the Economic Club of New York Wednesday Oct. 2, Boeing CEO Dennis Muilenburg said the company is expecting the grounding to be lifted in the fourth quarter of 2019.

Muilenburg’s speech comes as an international board of regulators continues to review the design and certification of the 737 MAX. A software update is also undergoing tests by Boeing to correct the malfunctioning of the aircraft’s maneuvering characteristic augmentation system (MCAS) that led to two separate Lion Air and Ethiopian Airlines crashes and killed a combined 346 passengers and flight crew.

“We continue to target regulatory approval for the 737 Max return to service this quarter. Though it's the FAA and other global regulators who will ultimately determine the timeline,” Muilenberg said.

The speech also provided the Boeing’s chief executive with the opportunity to outline progress the manufacturer is making to introduce changes designed to improve the functionality of the MCAS system and regain regulatory and passenger confidence in the safety of the MAX.

Boeing’s software update for the MAX was introduced in May, designed to address the preliminary findings from the Ethiopian Civil Aviation Authority’s investigators found that erroneous angle-of-attack (AOA) information from a faulty sensor on the 737 MAX caused the plane’s MCAS system to override pilot attempts to right the jet’s trajectory, pitching it toward the ground in a similar fashion to the Lion Air crash in October.

According to a description of the update featured on Boeing’s website, it will provide additional layers of protection to include comparing inputs from both AOA sensors instead of one, and will not activate MCAS if the sensors disagree by 5.5 degrees or more. As explained by Muilenburg, the update features three layers of redundancy to protect pilots from potential situations that lead to MCAS malfunctioning.

“The software update we've made adds triple redundancies to that software. One that requires two sensors feeds instead of a single. Secondly, it can only operate once instead of multiple times during a flight. And thirdly, we've reduced its control power. And so with those three redundancies built in, as I said, we’ve flown that new software, more than 700 times. I personally have flown with it a couple of times. We are very confident in that software solution and we are now just marching through the final steps on certifying that so that everybody's confident in the safety of the airplane,” Muilenburg said.

Software engineers working on the update have run it through 390,000 flight hours, equivalent to 45 years of flying, and test pilots have flown more than 700 MAX simulator flights with the new software as well, according to Muilenburg. The software update’s ability to reduce the influence of the MCAS system on the MAX in the event of faulty sensor data could prove to be a key factor in determining when the grounding is lifted.

The software update Boeing is working on is designed to address MCAS system malfunctioning. Photo: Boeing

The Boeing CEO’s speech comes a week after the National Transportation Safety Board (NTSB) sent seven recommendations to the FAA resulting from the agency’s involvement supporting the Ethiopian Airlines and Lion Air investigations. NTSB’s recommendations focused on urging the FAA to ensure safety assessments for the MAX and other aircraft assess pilot response to uncommanded flight control inputs. In separate statements, Boeing and FAA responded to NTSB, with both acknowledging the recommendations as they continue to review changes to the MAX.

In an emailed statement to Avionics International, a representative for the FAA said the agency is not speculating on any type of timeline for return to service of the MAX.

“We have steadfastly stayed away from speculating about a timeline for return to service. It will be ready when it’s ready,” the representative said.

Separately, the European Aviation Safety Agency (EASA) also issued a statement of clarification regarding its own process for eventually approving the MAX return to service. EASA also has not provided speculation on when the grounding will be lifted. Both EASA and FAA officials are part of the Joint Authorities Technical Review (JATR) group, which includes experts from NASA and the civil aviation regulatory agencies of Australia, Brazil, Canada, China, Indonesia, Japan, Singapore, and the United Arab Emirates that have been tasked with reviewing certification of the MAX’s automated flight control system.

According to Muilenburg, a total of 380 MAX aircraft that were either in-service or delivered have been grounded since March. Boeing scaled back its 737 production rate from 50 to 42 per month, and is storing and maintaining grounded and newly built MAX aircraft at locations in Puget Sound and Moses Lake, Washington as well as a facility in San Antonio. 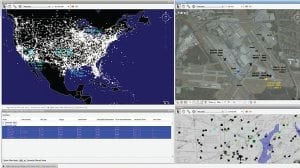