A deeper understanding of the Boeing 737 MAX and how its flight control systems should be operated under certain conditions have become the focus of the ongoing Lion Air flight JT610 crash investigation. No official cause has been determined for the crash, which killed all 189 people onboard after Lion Air pilots operating the 737 MAX 8 lost contact with Soekarno-Hatta’s air traffic control (ATC) and crashed into the Java Sea, north of Indonesia's Java Island.

The 737 MAX MCAS and other flight control systems became a focal point of the JT610 investigation after officials reviewed the aircraft flight data recorder (FDR). The FDR data showed that if an erroneously high single AOA sensor input is received from the aircraft flight control system, there is a potential for the 737 to repeatedly perform nose-down trim commands of its horizontal stabilizer. Subsequently, the FAA issued a new airworthiness directive for the aircraft requiring airlines to update their 737 MAX flight crew operations manuals.

During a Nov. 12 press conference in Indonesia, KNKT officials said the procedures the pilots of flight JT610 should have followed were not featured in Lion Air’s 737 MAX aircraft manual.

Organizations representing several major commercial airlines have sent inquiries to Boeing, the FAA and the NTSB looking to clarify information related to the operation of the 737 MAX when pilots are experiencing certain flight conditions. Boeing is not commenting on whether or not an overview of how the MCAS functions was or was not provided in the aircraft flight manual.

An official copy of the safety bulletin published by Boeing to the 737 MAX flight crew operations manual in response to the Lion Air investigation calls attention to an AOA failure condition that can only occur when pilots are manually flying the aircraft without any involvement from the flight control computer systems. Background information included in the safety bulletin update states that in the event of the 737 MAX flight control system experiencing erroneous AOA data, the pitch trim system can cause the stabilizer to perform uncommanded nose down movements lasting in increments of 10 seconds each. 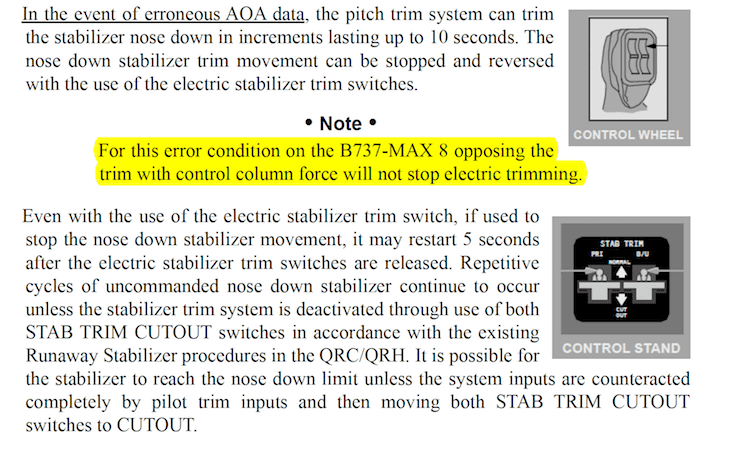 Boeing's call to attention for 737 MAX pilots that call attention to an
AOA failure condition that can occur during manual flight only (Autopilot OFF
and Flaps UP). Photo, courtesy of Allied Pilots Association.

“We have recently been given details on a new automated stall prevention system that Boeing previously withheld information on. We were not aware of this automated system prior to the Lion Air crash. We now have that information and procedures have been directed to combat that system should it trigger during erroneous angle of attack data events,” said Captain Dennis Tajer, an APA spokesperson.

Captain Tim Cannoll, president of the Air Line Pilots Association, Interntational, also submitted a letter urging the FAA, NTSB and Boeing to communicate “all relevant information” available related to the operation of the 737 MAX. Cannol’s letter does not refer to the MCAS system by name, rather but describes it as a “new automatic pitch control system” that is a new navigation feature not included on earlier versions of the 737.

On Nov. 5, CNN published an update on the crash investigation from Capt. Nurcahyo Utomo of Indonesia's National Transportation Safety Committee (KNKT) noting that the FDR review also concluded that the aircraft airspeed indicator was malfunctioning on four consecutive flights prior to the crash. Utomo also indicated the pilots should have recognized the malfunction when it occurred on flight JT610.

Statements obtained from representatives for Boeing by Avionics International note the company is not commenting on any details related to the MCAS system or news reports featuring internal company statements made by CEO Dennis Muilenburg.

“While we can’t discuss specifics of an on-going investigation, we have provided two updates for our operators around the world that re-emphasize existing procedures for these situations,” a representative for Boeing told Avionics in an emailed statement.

“We are deeply saddened by the loss of Lion Air Flight JT 610. We extend our heartfelt condolences and sympathies to the families and loved ones of those on board. We are taking every measure to fully understand all aspects of this accident, working closely with the investigating team and all regulatory authorities involved,” the representative added.

Search crews working with Basarnas, Indonesia's national search and rescue agency, is still trying to locate the aircraft cockpit voice recorder (CVR), which could provide additional information on what caused the crash. JT610 is the first crash of the 737 MAX aircraft type, of which there are 246 in service globally and an order backlog number greater than 4,000 for Boeing. 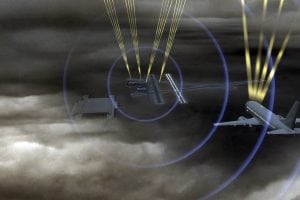 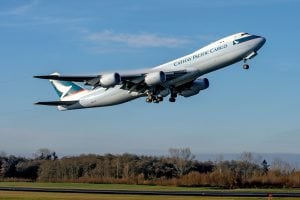