Boeing to Use LIDAR for Industry First on EcoDemonstrator A computer rendering of Boeing's ecoDemonstrator. Photo courtesy of Boeing

Boeing is looking to use light detection and ranging (LIDAR) in an industry first. The latest version of the original equipment manufacturer's ecoDemonstrator aircraft is researching the use of LIDAR to detect clear air turbulence, a capability that Boeing claims has never been achieved before on a commercial airplane.

Boeing first launched its ecoDemonstrator program in 2012 on a next-generation 737-800 on a loan from American Airlines. The program takes reconfigured Boeing commercial aircraft types and uses them as testbeds for evaluating new technologies.

The ecoDmonstrator has since evaluated more than 55 different technologies on American’s 737, a Boeing-owned 787, a 757 in collaboration with NASA and an Embraer E170.

Examples of technologies evaluated in the past include variable fan nozzles, a regenerative fuel cell and a NASA-developed algorithm that uses ADS-B In and Out data to enable time-based interval management for flight crews.

In 2018, Boeing is using a FedEx 777 air cargo-configured airframe to value an assortment of different technologies, including a synthetic instrument landing system that uses satellite information in the form of GPS signals to create an approach line to the runway.

A new video released by Boeing describes a future-facing use of LIDAR on the latest ecoDemonstrator in collaboration with the Japan Aerospace Exploration Agency (JAXA).

According to the U.S. National Oceanic and Atmosphere Administration (NOAA), LIDAR is a remote-sensing method that uses light in the form of a pulsed laser to measure variable distances. NOAA uses LIDAR in combination with data recorded by its own airborne systems to generate three dimensional information about the shape of the Earth and surface characteristics.

According to JAXA, the latest in-service aircraft LIDAR technology can detect small water drops, but the agency's is capable of detecting clear air turbulence.

“The latest system can detect a could with small water drops, but cannot find clear air turbulence," Shigeru Machida, a project manager for JAXA, said in the new video from Boeing. "Our system can detect that, so that’s why it’s a very very important technology, which can reduce aircraft accidents."

Boeing is flight testing a total of 35 different technologies on the latest ecoDemonstrator. The flying testbed will continue evaluating new technologies through the end of April, prior to being refurbished and returned to FedEx in June. 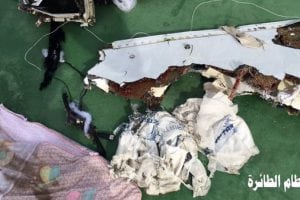