[Avionics Today 02-04-2016] Australia's Civil Aviation Safety Authority (CASA) airspace requirement for all aircraft operating under Instrument Flight Rules (IFR) within 500 nautical miles north and east of Perth becomes effective today, Feb. 4, requiring aircraft within these categories to be equipped with Automatic Dependent Surveillance Broadcast (ADS-B Out). The IFR Perth airspace mandate is one of a series of ADS-B mandates becoming effective in Australian airspace over the next year. Air traffic control tower at Perth International Airport in Australia. Photo: Airservices Australia.
The Feb. 4, 2016 Australian ADS-B mandate includes the following provisions:
• IFR aircraft operating within 500 nautical miles from Perth must be ADS-B equipped.
• IFR aircraft require Global Navigation Satellite System (GNSS) avionics.
• Aircraft operating to Brisbane (BNE), Sydney (SYD), Perth (PER) or Melbourne (MEL) are required to carry a Mode S transponder.
Additionally, the next Australian airspace mandate becomes effective Dec. 8, 2016, as CASA will require all aircraft manufactured on or after Dec. 8, 2016 to feature a GNSS receiver that is authorized in accordance with (E)TSO C145a, (E)TSO C146a or a later version those two Technical Standard Orders (TSOs).
By Feb. 2, 2017, CASA will require aircraft that were first registered prior to Feb. 6, 2014 to carry ADS-B transmitting equipment.
During a recent interview with Avionics Magazine, Greg Dunston, manager of surveillance, strategic planning and architecture for Airservices Australia, explained some of the differences between Australia's ADS-B airspace mandate and the requirements in other regions of the world, such as the U.S. where the FAA requires ADS-B Out equipment to be certified to the Radio Technical Commission for Aeronautics (RTCA) standard DO-260B, which is the highest and most stringent equipment standard for ADS-B in the world.
"Australia allows DO260, DO260A or DO260B. We have no mandates requiring DO260B. We do not use [Universal Access Transceiver] UAT. We already allow [Selective Availability] SA On GPS position sources, but have a forward fit for SA Aware in 2016," said Dunston.
According to the latest fleet equipage information reported by Airservices Australia, nearly 100 percent of commercial aircraft operating at or above Flight Level 290 (FL290) or 29,000 feet, are equipped with CASA-approved ADS-B Out avionics. Business jets and turbo props operating at or above FL290 have also achieved a nearly 100 percent equipage rate, while 38 percent of helicopters and 72 percent of all IFR aircraft operating in Australia currently feature ADS-B at or above the same altitude.
While the latest ADS-B Out mandate becomes effective Thursday, Feb. 4, in Australia, Dunston said Air Traffic Controllers (ATCs) there have been separating aircraft using ADS-B for more than a decade. Australia first completed its nationwide network of 28 ADS-B ground stations in 2010, and has expanded that to more than 70 ground stations in recent years.
Dunston said the use of ADS-B in Australia has introduced numerous benefits for the continent's aviation industry.
"ADS-B reduces the lateral separation of aircraft down to five nautical miles (5NM) in surveillance areas, allowing more aircraft to operate safely in the same volume of airspace. ADS-B improves the likelihood of an altitude or flight level change to improve passenger comfort due to weather, improve engine efficiency while reducing fuel burn and CO2 emissions," said Dunston.
Using ADS-B for surveillance also allows controllers in Australia to “more accurately pinpoint an aircraft’s position in the event of an incident or emergency,” he added.

The Airservices Australia manager also believes ADS-B Out is a foundation for further innovation and enhancement for aircraft tracking purposes in Australia and around the world. Currently, the Australian Air Navigation Service Provider (ANSP) is evaluating the use of space-based ADS-B for enhanced aircraft tracking purposes, recently signing a memorandum of agreement with Aireon to assess the creation of a platform to track ADS-B-equipped aircraft in real time via satellite beginning in 2018. 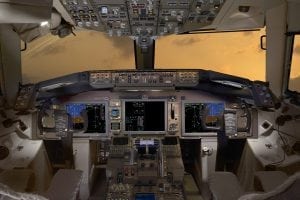