[Avionics Today 11-17-2015] Dassault and Textron Aviation both made big splashes on Monday, Nov. 16, at the National Business Aviation Association (NBAA) 2015 trade show in Las Vegas, Nev. Textron made the public introduction of its new Cessna Citation Longitude, and Dassault's Falcon 8X made its North American debut. Both airframe manufacturers also announced some updates about the avionics packages, flight testing schedules and delivery and certification expectations on those two aircraft. Here, we delve into the new aircraft and the modifications we can expect as they begin their path to market.

Additionally, the Longitude also has options for upgraded cockpit capabilities, including a Head-up Display (HUD), enhanced vision camera, Iridium Aircraft Communications and Reporting System (ACARS) and Future Air Navigation System (FANS) 1/A, as well as compatibility with the Single European Sky Link 2000+ data link communications channel. According to Textron, by incorporating the HUD and enhanced vision camera, operators will be capable of obtaining approval for lower approach minimums.

Textron Aviation President and CEO Scott Ernest told reporters during the public debut of the aircraft Monday that the Longitude's first flight will occur next year.

"We remain on track for first flight in 2016, and we should have the certification in 2017," said Ernest. "We will build four prototypes for this program and will have all four flying."

Dassault
Dassault Aviation Chairman and Chief Executive Officer Eric Tappier said Monday that the company expects to announce a new production and flight testing schedule for the Falcon 5X business jet early next year. The first flight of the 5X was originally projected to occur in 2015, however the program has been delayed due to some unexpected problems with the aircraft’s engines supplied by Snecma.

“When we have a better understanding, which should come soon, we will totally reorganize the schedule … we should be able to do that early next year,” said Tappier.

The French airframe manufacturer is currently more focused on the Falcon 8X, which has now passed the halfway point of its flight test program with more than 380 hours across 185 flights. Flight test aircraft one has achieved a top speed of Mach 0.97 during the program.

“We are extremely satisfied with the way the 8X program is progressing. Aircraft flight performance, notably long-range capability, has fully met design targets and production ramp up has proceeded smoothly,” said Trappier. “We anticipate certification by mid-2016, on schedule, with initial deliveries to follow in the second half of the year.”

The flight-testing program on the 8X has also opened the aircraft's full flight envelope, up to 51,000 feet in altitude, according to Olivier Villa, senior vice president of the civil aircraft division at Dassault Aviation.

One of the biggest news items of the day for Dassault, though, was the announcement of the launch of a proprietary Combined Vision System (CVS), the FalconEye. According to Villa, FalconEye is the first HUD system to combine a database-driven terrain-mapping SVS with thermal and low-light camera images. The camera features six different sensors and the ability to present a picture to the pilot that combines visible and infrared spectrums.

"This system combines infrared with very sophisticated sensors and synthetic vision system with a very large high definition. The pilot can adjust which part he wants to be infrared vision and which part is synthetic for optimal situational awareness," Villa explained during the Dassault press conference at NBAA.

Dassault plans on certifying the CVS in three steps, with the basic system certification expected for early next year, and to be available on the 8X when it enters into service. Dassault will also look to add operational gains and certify the system for operation down to a decision height of 100 feet. Last, and most boldly, the Falcon 8X team wants to give pilots the ability to use purely the CVS to land the aircraft. 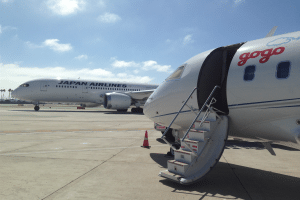 ATG vs. Satellite: Gogo CEO Speaks to the Future of Connectivity