General Aviation (GA) pilots and operators received increased access to financing options for upgrading their aircraft with avionics mandated by the FAA’s NextGen airspace modernization program with a new partnership between NextGen GA Fund and the Aircraft Electronics Association (AEA). FreeFlight System's RANGR 978 ADS-B solution. Photo, courtesy of FreeFlight Systems.
NextGen GA Fund, a public-private partnership between the U.S. Congress, the aerospace industry and the private-sector investment community, provides federal loan guarantees for stipulated equipage families to include WAAS-capable GPS, ADS-B In, ADS-B Out, RNAV/RNP avionics, flat panel displays, antennas, and installation and certification costs.
AEA's new partnership provides its member repair stations with a special web portal giving them the ability to quickly and seamlessly refer customers to the NextGen GA Fund as a financing alternative. More than 157,000 GA aircraft need upgrades for future airspace modernization, according to AEA.
Equipage Concerns
The biggest concern for GA pilots is ADS-B equipage due to the FAA's 2020 mandate requiring all aircraft flying within the National Airspace System to be equipped with ADS-B Out. But its not just the ADS-B Out box itself that causes a significant expense for pilots, its also the installation process, which may require GPS inputs, says Tom Kramer, manager of airspace and modernization at the Aircraft Owners and Pilots Association (AOPA).
"For a lot of aircraft they don't have GPS inputs, so that's going to be a significant portion of the cost, the GPS positioning equipment to enable ADS-B. The ADS-B box itself is not as expensive, but for a lot of aircraft they will need that separate GPS component," said Kramer.
Kramer estimates that the cost of installing ADS-B on an average GA aircraft that does not have the required GPS equipment already installed could range from between $10,000 to $20,000, an expense that not every independent GA pilot and operator can afford out of pocket.
Industry Options
Another barrier to equipage right now is the limited number of certified ADS-B Out options available for GA aircraft, Kramer said.
"There's not a lot of marketplace knowledge about them, folks aren't very familiar with them, they're familiar with names though such as Garmin, FreeFlight Systems, but it’s just not a lot of general knowledge about the solutions. This is all new, and so pilots just have to educate themselves about what's available," said Kramer.
FreeFlight Systems is actually looking to directly tackle that issue as well. The Texas-based manufacturer is teaming up with avionics shops to build a "knowledge base of information about ADS-B installations in the widely diverse range of aircraft and installed avionics in the U.S. GA fleet," according to a statement. The company is looking to expand certification of its RANGR ADS-B systems for a range of GA aircraft at a relatively low cost for pilots and operators.  According to Jessica Power, director of marketing at FreeFlight Systems, the cost of the RANGR ADS-B Out system with internal WAAS/GPS, and antennas start at $4,995.
Efforts by companies such as FreeFlight Systems to provide ADS-B solutions at lower costs and to provide more knowledge about the installation process combined with the NextGen GA Fund financing alternative should help GA pilots and owners to avoid a situation where too many have waited until the last minute to upgrade prior to the 2020 mandate. That scenario would make equipage-upgrades physically and logistically impossible by the deadline, according to Kramer.

"The debate is not about upgrading U.S. aircraft with NextGen; it's how to inexpensively finance it. The NextGen GA Fund is about doing just that. An alternative to commercial bank financing alternatives, the NextGen GA Fund offers owners of General Aviation aircraft the advantage to equip for NextGen without a large cash outlay or having to mortgage the aircraft in return," said Michael Dyment, a general partner with the NEXA General Partnership, manager of the NextGen GA Fund. 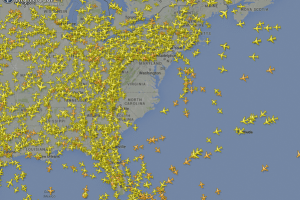 UPDATE - ERAM Not the Cause of Major Flight Delays, FAA Says