The decision of whether to install a connectivity system in a business aircraft is relatively easy; in our always-connected world, it’s the cost of doing business. However, the selection of which system to install and when can be more complicated.

The connectivity market, particularly for business aviation, has undergone a period of very rapid change as the technologies in the consumer market have transitioned to the aircraft. New avionics systems, seemingly, were being introduced every week, adding new capabilities and support for the latest tablets and smartphones. And that continues. But in the coming years, the service end of the connectivity equation will be catching up, including the enhanced services of Iridium, Gogo Biz air-to-ground network, Inmarsat’s SwiftBroadband and Ku-band satellite services. There are also three emerging technologies –– Ka-band satellite, Iridium NEXT and Aircell’s ATG-4 which are in various stages of development for business aviation –– which promise to bring huge amounts of bandwidth and fast speeds to business aircraft.

Additionally, the authorization of use of the Iridium network for safety-critical services, for oceanic services over the North Atlantic and others, is ramping up demand as well.

It’s a dilemma we all face on the ground or in the air –– is it the right time to buy the next-generation technology or wait until the next one? Buy the iPhone 5 or wait for the 6? Buy the latest tablet product, or wait until next year when all the bugs have been fixed?

“Staying current on what network services are available now and what’s on the horizon is perhaps the best way to ensure you continue to make the best decisions for your flight operation,” Aircell said in a technology brief in October.

The challenge for business aircraft operators becomes choosing a system that can be future-proofed and/or one with a clear upgrade path for future systems, according to the installers and maintainers of these systems.

“Virtually every aircraft we touch that does not currently have a system is asking to have one installed,” said Rick Brainard, vice president of business development at West Star Aviation, a maintenance and installation company headquartered in East Alton, Ill. The company averages about five connectivity system installs a month. “We see most customers wanting connectivity now. New or enhanced systems coming out in the future are not really seen as a deterrent to getting the connectivity that fits their needs.”

That drive for connectivity presents a challenge for avionics companies to develop cutting edge systems, but being ever mindful of upgrade possibilities for operators.

“Clearly if you’re buying an ultra-range range, large cabin aircraft today and you want high bandwidth capability to the cabin, you’re unlikely to hold off. We see sales of Ku-band based systems continuing and I think the broad market sees that as well,” said Bob Ellis, director of flight information solutions marketing at Rockwell Collins.

The other half of the connectivity equation is the services side.

“Over the last 12 months the products have somewhat stabilized. Service prices, which have impeded sales, have come down quite a bit. No, we don’t have people waiting for the next system, they either perform the installation or decline due to services and/or installation costs and some feel the speed is too slow to satisfy the boss. Most systems designed today require just an antenna change to increase the speed, which makes the upgrade path quite simple and economical,” said Brian Wilson, director of avionics at Banyan Air Services, based in Fort Lauderdale, Fla. Banyan said his team averages about 2 or 3 connectivity system installs a month, typically done during regular maintenance inspections of the aircraft.

Maintenance, repair and overall (MRO) facilities around the world are adding supplemental type certificates (STC) for the installation of these systems. Earlier this year, Banyan was awarded a FAA STC for the installation of a Honeywell Aspire 200LG satcom system on Gulfstream GII/GIII/GIV. Other Banyan STCs include installation of Thrane & Thrane AVIATOR 200 Inmarsat Satellite Communication on Citation, and recent retrofit installations include Rockwell Collins Tailwind 550 airborne TV system and Venue cabin management system. West Star Aviation was awarded STC approval to install Wi-Fi on the Gulfstream V. The certification includes connectivity via both or either Inmarsat SwiftBroadband and the Aircell Gogo Biz networks using the Aircell CTR wireless router.

“The faster the speed, the pricier the installation,” Wilson said. “The faster the speed, the size of the antenna increases which eliminates the small and mid-size airframes. Passengers want capabilities similar to what they have on the ground and in their office or home. But this is where the misconception starts; technology today can’t provide that service. Checking email, making calls from your smart phone, light browsing of the Internet is what the masses can have. YouTube videos, social media, large attachment files are limited to the large airframes with clients who can spend $500,00+ for the installation and up to $8,000 a month for the service.”

Among the next generation connectivity services:

“Ka capability will not be considered a nice to have function in the aircraft, it will be considered a minimum to operate in a more and more data intensive business and personal entertainment environment,” said Paul Lafata, cabin systems business leader at Honeywell.

–– Iridium’s NEXT constellation, with satellite launches are scheduled to begin in 2015 with service availability expected in 2017, will provide voice and data service via an all-new constellation of low-earth orbit satellites. “Iridium NEXT is on track to further Iridium’s position as a vital player in the global communications infrastructure. Our organization and its ecosystem of partners around the world are very excited about the influence this tremendous, next-generation network will have on continuing to connect organizations and people in ways never before thought possible,” said Scott Smith, executive vice president, Iridium NEXT.

–– ATG-4 is a higher-capacity incarnation of the current Gogo high-speed Internet service. “For operators of larger business aircraft that seek bandwidth capabilities beyond Gogo Biz service, ATG-4 is worth watching,” Aircell said.

From the operator’s perspective, even the smallest upgrades can yield big gains for the end user. General Mills’ Air Transportation department, based in Minneapolis, operates a fleet of three Citation Xs installed with AVIATOR 300 SwiftBroadband system, developed by Thrane & Thrane, now a part of Cobham. Eric Olson, aircraft maintenance manager at General Mills Air Transportation, said the company’s upgrade plans include the addition of a new onboard router developed by Satcom Direct, the Satcom Direct Router (SDR), which “will increase the user experience of the system both in the cabin and the cockpit,” Olson said.

“Our passengers are typically in meetings all day and once onboard the aircraft, have the opportunity to catch up on communications while traveling to the next destination or back home. The feedback we receive from our passengers indicates they are extremely happy with the availability of Internet on the aircraft,” he said.

“We operate in a manner that everything we do has some positive effect on our core mission. Connectivity for our passengers is part of the user experience we offer for them. Accessibility for the flight crew and maintenance is one of many tools we use to support the operation,” he added.

Commercial-off-the-shelf systems, namely iPads, are also helping operators wring new efficiencies out of their current systems. Olson said his company is operating with iPads in the cockpit, which provide flight crews and maintenance technicians with applications that have “a direct positive relationship on the increased safety of our operation,” including using satcom systems to transmit vital information on aircraft discrepancies from the flight crew to maintenance.

“Just the other day, one of the cockpit displays was indicating the digits backwards and inverted. It happened only for a short time, but the crew was able to snap a picture of it, send it to maintenance and we had the opportunity to troubleshoot the issue prior to the aircrafts arrival. In many cases, having the Internet onboard and the ability to send the maintenance group a picture or note on an issue has saved valuable troubleshooting time,” Olson said.

Thanks to the sluggish global economy, business aviation is expected to remain soft in 2013, according to market forecasts, with some growth in the larger, longer-range jets, but decreases across other categories.

The Honeywell Business Aviation Outlook, which was released ahead of the National Business Aviation Association’s (NBAA) annual event, predicted 10,000 new business jet deliveries worth about $250 billion from 2012 to 2022, a 9 percent increase in terms of dollar value from last year’s forecast. However, the number of jets forecasted is roughly the same as last year; the 9 percent comes from pricing increases and a change in expected jet mix toward larger business jet models. The company sees 2012 deliveries of about 680 to 720 business jets, a single-digit increase over levels reported in last year’s forecast.

“Next year’s totals are anticipated to be of similar magnitude, reflecting the protracted nature of the global economy,” said Rob Wilson, president, Honeywell Business and General Aviation. “Over the medium term, a return to historical growth conditions supported by globalization, wealth creating in developing nations and new aircraft development should boost orders and support accelerated growth beginning mid-decade. Despite the economic challenges our industry has been dealing with for the past 40 months, we believe some progress is being made. “The trend toward larger cabin aircraft with ever-increasing range expectations and advanced avionics continues to be reflected in this year’s survey,” Wilson added.

Additionally, Honeywell said the overall demand from outside North America continues to increase as well. This year, roughly 53 percent of projected demand comes from North American operators, down two points from the 2011 survey.

Additionally, Rockwell Collins executives in October expressed similar flat projections for 2013. “As bad as the timing of the recovery has been for business aviation, the only silver lining is here” in upgrading aircraft with you systems, said Colin Mahoney, vice president, Commercial Systems Marketing and Sales for Rockwell Collins. “What you’re seeing is people saying I can’t sell their aircraft, it’s not worth anything or I don’t want to sell it for what it’s worth, so I’m going to put some money into it. We see some increasing interest in updates of all kinds flight decks and cabins.” 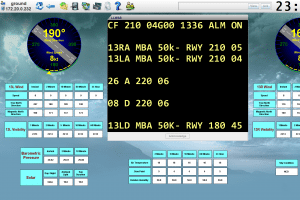