“The landing approach in the F-35C is flown with the stick only,” noted Canin. “The throttle is automatic.” IDLC may someday facilitate hands-off landings and other possible F-35 shipboard enhancements.

At the heart of the JSF DI implementation is a variant-specific On-Board Model (OBM). The OBM predicts, for the current state of the aircraft, the response that will result from various control surface deflections. Given pilot commands, the VMCs “invert” the OBM in real-time to determine what control surface deflections will provide the desired response. Canin, a Former Navy A-7 pilot, has flown all the JSF versions and now tests the F-35B and C models at Pax River. “Across all three variants, there’s almost no difference in the response to pilot inputs, only in the aerodynamic models used to achieve the response,” he said. “We define the response we want, and the software figures out what to do with the control surfaces.”

Canin added, “That’s the beauty of using this approach when you’re developing three airplanes concurrently. By restricting the differences to the onboard models, the aircraft response developed for one variant transfers naturally to the others.” Common control law development affords cost savings across the JSF variants.

Safe carrier approaches require the airplane be stabilized in the correct glideslope and attitude to touch down with the proper geometry and rate of descent. Carrier pilots maintain that glideslope with visual reference to an optical landing aid on the ship, or “meatball.” They make continuous power changes while holding the aircraft at a near-constant angle of attack (alpha). According to Canin, “If we’re going to hold alpha constant, then the only way to change lift is by accelerating or decelerating the airplane. We do this with power, but because of engine lag and aircraft inertia, there’s a lot of anticipation required, and a lot of corrections and counter-corrections. Doing that well requires skill, seat-of-the-pants [flying], and a lot of practice.”

He offered, “A much better approach would be to control the coefficient of lift itself, by changing the camber of the wing.”

All three F-35 versions have trailing edge flaps to change camber. In addition, the longer-wing F 35C has ailerons. The flaps normally droop 15 degrees in the landing configuration. However, active IDLC moves the flaps up and down from that reference point proportional to the rate of throttle movement. Canin said, “With IDLC, we change the symmetric deflection of the flaps and the ailerons in response to pitch and throttle commands by the pilot. The glideslope response is immediate, and doesn’t require a speed or alpha change. This is a tremendous advantage over a stiff-wing airplane.”

Legacy F-14 fighters and S-3 patrol jets had simple Direct Lift Control that let pilots command spoilers in or out with a dedicated button. “Ours is much more intuitive and natural,” said Canin. “It’s an integral part of the flight control system and responds to the pilot’s normal stick and throttle movements, without requiring a separate control.” The flight control system also compensates for the pitching moments induced by the lifting surface deflections — F-35C ailerons pitch the airplane on approach almost as much as the big horizontal stabilizers — to maintain the proper angle of attack.

IDLC is commanded by an Approach Mode Control button on the F-35 active inceptor stick. “You really could have done this with any other airplane,” acknowledged Canin, “but the implementation would have been more complicated.” He added, “It’s easier and cleaner to do this with a flight control system that’s naturally a pitch-rate-command system.”

The VMC was also designed for affordability and meant to control life-cycle sustainment costs with managed obsolescence. The baseline configuration supports two Freescale PowerPC 7410 processing elements and can expand to support up to four such processors and three SAE AS5643 1394b high-speed serial buses. Based on BAE experience with F-22A, F-16, F-15 and F/A-18 flight control systems, Beck stated the expandable VMC design is more than sufficient to manage any likely growth or added functionality over the life of the F-35 program.

The throttle is likewise back-driven to give the pilot situational awareness about the energy state of the airplane and the corrections being made. If or when the pilot breaks out of Approach Mode, the throttle position is synchronized to the engine thrust request (ETR). “If the throttle is physically jammed, the approach mode will still work. One of the redundancy features of the airplane is that the physical throttle linkage is no longer required,” Canin said.

Lockheed Martin engineers develop F-35 control law software using MATLAB and Simulink tools from MathWorks in Natick, Mass. Software and hardware come together in the Vehicle Systems Integration Facility (VSIF) in Fort Worth, Texas. “VSIF consists of an F-35 spread out over a gymnasium-sized area. It’s a hardware-in-the-loop testbed that runs real code on real hardware, including the flight control surfaces themselves. When you fly that simulator, the flaps actually move. There’s even equipment producing forces that oppose them, replicating the expected airloads,” said Canin.

The big systems integration facility full of F-35 hardware is nevertheless costly to operate. For routine control law development, Lockheed Martin engineers and test pilots use a VIF motion-based simulator made by Rexroth in the Netherlands.

“That’s what we use for more of the pilot-in-the-loop development work,” said Canin. “The VIF runs the actual flight control software in actual VMCs, but it doesn’t have all the power systems, hydraulics and actuators of the VSIF. We can do carrier landings, formation flight and other high-gain control tasks. Proposed control law changes can be checked out very quickly in this sim, and then given to us to fly.”

Unlike production F-35s, the JSF SDD aircraft have a Flight Test Aid (FTA) system that allows pilots to evaluate different control gains and mechanizations in flight. Using FTAs, for example, pilots were able to look at IDLC gains of 150 percent, 200 percent and 300 percent of the original baseline gain, eventually settling on 300 percent.

“We can do this safely, because if we ever see anything we don’t like, we can press a paddle switch on the stick to put us immediately back to the baseline control law,” said Canin. Since F-35 production software and test software are the same, LRIP aircraft will actually have the FTAs incorporated but no FTA switch with which to activate them.

All three variants of the F-35 provide some measure of IDLC. “Glideslope is always important,” observed Canin. “Anything you can do to improve flight path control on approach is a good thing. Wave-off performance is also improved with IDLC, since it can stop or reduce your rate of descent while you’re waiting for the engine to spool up.”

The IDLC function is not identical in all the three F-35 variants, however. “The IDLC gain is much higher in the C-model than the other two,” said Canin. “We only have one release of software for the three variants. It configures itself when it wakes up and discovers which type of F-35 it’s in.” The F-35B does not use IDLC at all in jet-borne (vertical landing) mode, when aerodynamic control surfaces are fixed.

Even with its innovative flight controls, the F-35C, from the pilot’s perspective, is relatively conventional coming aboard the carrier. “Determining where you are with respect to lineup and glideslope is all visual,” acknowledged Canin. “For lineup, you look at the ship and line up on centerline … easy enough if the ship’s heading is steady, but tricky if the ship is wallowing,” noted Canin. “As for glideslope, you have to watch the meatball and see small deviations. Then you have to put the ball back in the middle, with the right rate of descent so it stays there. None of that’s changed with this airplane, but what we’re giving the pilot is more responsiveness and bandwidth to do that.”

The F-35 uses a BAE Helmet Mounted Display (HMD) instead of a conventional Head-Up Display (HUD). Like a classic HUD, the HMD shows the pilot a flight path marker (or velocity vector), with a bracket to indicate if the aircraft is “on speed” or flying fast or slow. Meanwhile, a caret moves up or down in reference to the flight path marker to give an acceleration-deceleration cue.

Ashore, when the aircraft is on glideslope, the pilot simply puts the flight path marker by the meatball and the aircraft stays on that glideslope. “At the ship, since the landing area is moving through the water, the pilot needs to put the flight path marker out in front of it. He needs to put it where the landing area will be when he gets there, which again requires judgment. A better system would be put the velocity vector into the moving reference frame of the boat,” Canin said.

Though not currently part of the F-35 plan, implementing a “ship-referenced velocity vector” (SRVV) would allow the pilot to put the SRVV on the intended touchdown point to hold glideslope. “All we would need to know from the ship is its current velocity, so we can put the airplane symbology in that reference frame,” Canin said.

Readily rewritten control laws have other possibilities. “With the current flight control law, the pilot commands pitch rate with the stick, and uses that pitch rate to establish a glideslope,” noted Canin. “There’s no reason, though, why the flight control system couldn’t establish a baseline glideslope, and allow the pilot to apply control stick pressure to command tweaks around that glideslope in response to ball deviations.” A “glideslope command” mechanization of this sort is not in the baseline airplane now, but is an example of the type of changes that could relatively easily be incorporated in the F-35 control system.

For recoveries in the worst weather, the A-7 and other carrier aircraft flew coupled automatic landings based on radar tracking and datalinked commands from the ship. Canin confided, “I’d break out of it in-close the few times I did one. The pilot doesn’t’ get a [landing] grade if he lets George [autopilot] fly it to touchdown.”

The JSF test program currently has no autolanding requirement, but plans call for an F-35C autolanding capability based on the Joint Precision Approach and Landing System. “The F-35 will take more of a self-contained approach — an internally generated glideslope from GPS.”

IDLC is just one part of the F-35 test program which will now include tests of a refined tailhook for arrested landings. “We look at approach handling qualities every chance we get,” said Canin. “Where the rubber meets the road, though, is at touchdown. Until recently we haven’t had a loads clearance that allowed us to do carrier-type landings, but now we do, so now we’ll be able to look at our control precision to touchdown.”

Canin concluded, “Carrier landings, particularly at night, are still considered to be the hardest thing to do in aviation. But I think we now have an airplane, and the people in our control laws group, that can kill that notion forever. The carrier approach is a very well-defined problem, and there’s no reason why this airplane can’t completely change the game.” 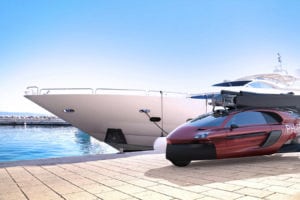