If the number of press releases that come into my inbox are any indication, tablet computers, more specifically iPads, are becoming as ubiquitous in airplanes as seatback tray tables and multifunction displays.

The pervasiveness of Apple products is undeniable. It seems there is an “app” for everything and aviation and avionics are no exception. From the cockpit to the cabin to the tower to the simulator, iPads quickly becoming a pilot’s, and passenger’s, most versatile device. Just 10 or so years ago, it seemed unbelievable that we could walk around with a device capable of streaming movies, music, photos, videos, etc., but here we are with personal computers in our pockets.

The aviation applications for iPads are amazing — iPads as electronic flight bags, in-flight weather displays, flight planning system apps; iPad-based GPS systems; iPad/iPods as remotes for cabin management systems; iPads for pilot training; iPads for maintenance manuals; iPads with apps for airport surface surveillance programs; iPad apps for maintenance shops and FBOs. (And in a beautiful moment of unplanned synchronicity, as I was writing this, this magazine announced that it, too, has an app. Download the free Avionics Magazine iPad app in the iTunes app store.)

The most novel thing about an iPad isn’t its capabilities; they’ve existed in other forms in other places for a long time. It’s the ability to have all of that functionality in a lightweight, portable package, and one that doesn’t have to undergo the rigorous and sometimes lengthy certification processes. iPads, with their relatively low cost and user-friendly interfaces, provide an opportunity to bring functionality and capabilities, like electronic flight bags, for example, to operators who wouldn’t otherwise have them. What started out as a way to videoconference (FaceTime) with far-flung family members has morphed into a de-facto flight deck system.

“When the iPad hit the market, we took one look at it and said this is the perfect fit,” said Gary Beck, Alaska Airlines’ vice president of flight operations. The airline announced plans to provide its pilots with the systems for use as a Class 1 EFB. American Airlines, Swedish cargo carrier Amapola, United and British Airways have all announced similar iplans in the last year.

“The paperless flight deck represents the next generation of flying,” Capt. Fred Abbott, United’s senior vice president of flight operations, said last year. “The introduction of iPads ensures our pilots have essential and real-time information at their fingertips at all times throughout the flight.”

I don’t think even the savviest of soothsayers in aviation or in the general public could have predicted the massive uptake of Apple device adoption.

And that’s just the cockpit. The adoption of iPad as cockpit tools doesn’t even begin to address the products and apps that have emerged for the devices in the cabin. In March, Apple said it recorded 25 billion app downloads by the users of more than 315 iPhone, iPad and iPod Touch users worldwide. I don’t think even the savviest of soothsayers in aviation or in the general public could have predicted the massive uptake of Apple device adoption. For avionics manufacturers and connectivity providers that provided a challenge to develop networks that would accommodate these devices but in a way and at a price point that made the investment worth while for airlines and consumers. In-flight connectivity for air transport and business aviation has come a long way since Connexion by Boeing failed in 2006 and much of that can be attributed to the rise of iPads and other “smart” devices.

There are still a lot of things that an iPad simply can’t or shouldn’t do, particularly when you’re talking about safety of aircraft operations and security of the network that the safety-critical data and systems are operating on. Some of the safety concerns about smartphones, notably that they interfere with safety-critical systems in the cockpit, may be waning with news that FAA is taking a “fresh look” at the use of personal electronic devices on planes, allowing the possibility that tablets and e-readers could be used during takeoff and landing. (Pilots got that ability last year.) It will be interesting to see how the in-flight isituation develops as the rest of the aviation/certification world catches up with Steve Jobs and his vision for mobile computing. 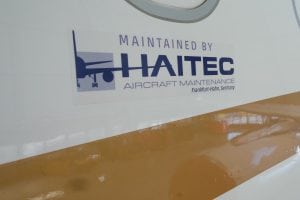