Little has more than 20 years of experience in electronics product engineering and design. Previously, he worked as senior design engineer for LOFA Industries developing microcontroller-based electronic products. Before that, he held positions with Sunrise Telecom and Scientific Atlanta.

McNellis has more than 30 years of executive and program management experience in domestic and international defense projects. He joined L-3 Communications in 2003 as president of Link Simulation and Training. Prior to L-3, McNellis was president of Lockheed Martin’s Tactical Systems unit and held positions at Loral and IBM.

McNellis will be succeeded at L-3 Link by Robert Birmingham. Since joining the company in 2006, Birmingham has been the senior vice president for Army programs and lead strategic planning for the Sensors and Simulation Group.

Wade has more than 20 years of experience in avionics and in-flight communications. Before joining Aircell, he was chief technical officer and general manager at OnAir, where he was responsible for its Internet business, including sales, strategy, customer relationship management and product development. He also held positions at Tenzing Communications, Primex Aerospace Co. and GEC Marconi In-Flight Systems.

StandardAero appointed Claude Chidiac vice president of business development for Business Aviation, based at the company’s headquarters in Tempe, Ariz.

Chidiac will be responsible for developing a strategy for the business aviation sector and for creating ways to grow existing products and services.

AIA Board of Governors

Bailey will be located at Crane Aerospace’s Burbank, Calif., site.

He joined Crane Aerospace & Electronics as technology director for Europe. Before that position, he was head of engineering for Dunlop Aerospace Braking Systems, which is part of Meggitt plc.

Randall has more than 30 years of avionics maintenance, testing, sales and management experience. Prior to joining Universal Avionics, he was executive director of sales and marketing at Shadin Avionics. He is a licensed A&P mechanic.

Before joining ITT, Melcher had a 32-year career in the U.S. military, rising to the rank of three-star general. Most recently, he was Military Deputy for Budget, serving as the senior military financial manager for the U.S. Army in the Pentagon. 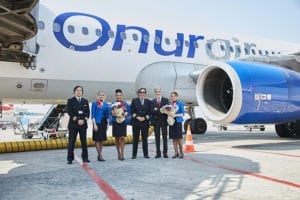 Aerkomm Partners with Airbus, Others on Connectivity