You get to ride in some interesting flying machines on this job — always a treat for a guy who mainly flies a desk equipped with Apple Macintosh avionics. Since my last dispatch, I’ve added two aircraft to the portfolio, both relevant to the National Business Aviation Association (NBAA) convention this month.

Roundabout Aug. 14, I was among a handful of aviation writers invited to fly aboard a Honeywell-operated Convair CV-580, circa 1952. Climbing into this elegant old airliner, one of the earlier turboprop Convairs powered by twin Allison T501-D13H engines, was a throwback to another, grander era. But no, Honeywell is not bringing the CV-580 back as an executive transport. This was a test aircraft fitted with a decidedly modern piece of equipment, Honeywell’s RDR-4000 3-D volumetric scanning weather radar. Hidden from view in the nose cone of the grand dame were the goods — a receiver/transmitter, drive motors and antenna.

Honeywell flew us to Florida as a prelude to NBAA, where it planned to unveil the new "IntuVue" family of weather radars based on the RDR-4000. An IntuVue radar with a shorter antenna drive will fly on the new Gulfstream G650, and Honeywell plans two other models in the next three to four years to further penetrate the GA and business jet markets.

Comparable technology is offered by Rockwell Collins, which unveiled the RTA-4100 MultiScan weather radar for business jets at NBAA 2007. Descended from the MultiScan Hazard Detection system specified for the Boeing 787, the RTA-4100 will be available for aircraft equipped with Pro Line 21 and Pro Line Fusion avionics. For more on MultiScan, you can access "New Horizons in Radar: The Revolution in Weather Hazard Detection," a free Webinar presented by Aviation Today and Rockwell Collins, at www.aviationtoday.com/webinars.

IntuVue has a pedigree that includes the C-17, the Boeing 777 and 737NG and the Airbus A380 weather radars. Why IntuVue? "It may seem obvious to you, but we went through quite an exercise to come up with this name," said Honeywell’s Michael M. Grove. "It’s coined from the notion that it’s an intuitive radar and it provides a unique, 3-D view of the weather."

After the briefing at Orlando Executive Airport, we filed out to the waiting CV-580 for a demonstration of the RDR-4000’s reach, projected on a display in the aircraft’s cabin. Now I may have a solid chin, but my stomach is suspect and I didn’t relish the thought of chasing hurricanes — or anything dark and menacing — over the Gulf of Mexico. But chief pilot Markus Johnson, director of Honeywell Aerospace Flight Operations, kept the Convair steady and level as we flew southwest to Fort Myers, northerly along the coast to Sarasota and back.

The point of weather radar, after all, is to help pilots steer clear of threats. The RDR-4000 provides a scanning "buffer" from the nose of the aircraft to 320 miles, from the ground to 60,000 feet, and with turbulence detection to 40 nm. Secure in our seats, we observed the range of colors — green, yellow, red, magenta — representing radar returns from outlying weather.

A week later, I found myself in the right seat of a Pilatus PC-12/45 piloted by Eric Smedberg, a demonstration pilot with Innovative Solutions & Support (IS&S). The PC-12, a powerful, single-engine turboprop introduced in the mid-1990s, is getting a new look and functionality with IS&S’s Cockpit/IP Flat Panel Display System. Recently, the company announced upgrades including a single-sided cockpit option, WAAS and group RVSM certification for different configurations.

Now pilots can choose from a variety of IS&S display configurations for their PC-12s. Smedberg flew with twin 10-inch displays in front while I followed the action on a 15-inch LCD. We departed Brandywine Airport in West Chester, Pa., headed in a westerly direction, overflew the runway at Chester County G.O. Carlson Airport in nearby Coatesville, and returned — a brief flight but enough to demonstrate the different display and chart options, readability and interesting twists of the system, including a "zoom" feature that enlarges select settings such as airspeed, altitude or heading.

IS&S President Roman G. Ptakowski sees a market for some 300 PC-12 display retrofits. For more on IS&S, look for our interview with Ptakowski in the November issue. 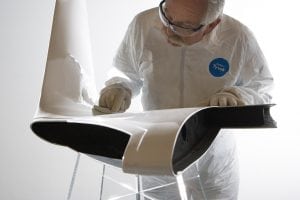