Rockwell Collins, Cedar Rapids, Iowa, named Greg Irmen vice president and general manager, Business and Regional Systems. Irmen replaces Denny Helgeson, who is retiring. Helgeson will continue as vice president and general manager-special assistant until September. In this role, Helgeson will focus on the executive transition of the business and with customers. Irmen has 11 years of service with Rockwell Collins, most recently as senior director of Boeing programs.

EADS Test & Services named Paul-Jerome Evette CEO. Prior to this position, Evette was CEO of APSYS, another EADS Defense and Security company specializing in operational safety. He started his career as an auditor at KPMG in Dublin and Paris, then held the position of chief financial officer in two French companies. In 1993, he joined the Aerospatiale Group as internal audit director.

JetCorp Technical Services, St. Louis, Mo., named Danny Farnham vice president, modifications/refurbishment. Farnham has more than 40 years of experience in the aviation industry. He most recently was vice president of completions/modifications at Midcoast Aviation in Cahokia, Ill. Prior to joining Midcoast, Farnham spent nine years as chief inspector and Gulfstream maintenance coordinator at The Jet Center in Van Nuys, Calif. In addition, he held positions in the maintenance departments at Trans World Airlines, Northrop Aircraft and Lockheed Aircraft. He began his career as an aircraft mechanic/crew chief in the U.S. Air Force. JetCorp’s modification and refurbishment capabilities include all interior modifications and configuration changes, including conversion of regional jets from airline configuration to high-end executive interiors. In addition, the company installs cabin management systems, lighting, plumbing, upholstery and soft goods, fabrication and finish of cabinetry and other aesthetic upgrades.

GeoEye, Dulles, Va., named Dejan M. Damjanovic director of air and marine solutions. Damjanovic has been with GeoEye since January 2002 and now leads the manufacturing of all aeronautical and maritime products and services. GeoEye is a developer of commercial and military airport geospatial information support, terrain and obstacle databases. Damjanovic has more than 20 years of experience in the aeronautical and geospatial industries. He holds a commercial pilot license in the United States and Canada.

Crane Aerospace & Electronics, Lynnwood, Wash., appointed Patrice Herbay regional business manager, Aerospace Group. In this role, Herbay will be responsible for developing business and relationships with Crane customers in France and Spain, including Airbus and other major European OEM, airline and systems customers. He will be located in Toulouse, France. Prior to Crane, Herbay worked with the customer services organization at Airbus. Before that, he held design and project engineering roles in the rail transport industry in France.

Peter Moores, global and strategic accounts manager for Aviation Ground Support Equipment at GE Sensing in New Fairfield, Conn., has been appointed to a three-year term as membership director on the Airline Avionics Institute (AAI) board of directors. Moores, who has been with GE Sensing for 15 years, sells and supports the company’s air data test set products to the United States military and OEM customers. 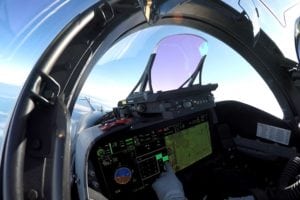