The problem of intermittent failures in aircraft electronic equipment has long plagued operators, who receive questionable components back from avionics shops labeled "NFF" (no-fault-found). NFF occurs when a component that apparently failed in flight is sent to a repair station or original equipment manufacturer (OEM) for testing, but no failure is found. It has brought so much inefficiency into airline and corporate aircraft maintenance that delegates at the Avionics Maintenance Conference (AMC) held in July discussed whether AMC needs to develop standards on how to deal with NFF.

"To get an [NFF] problem fixed takes a lot more effort than if [maintenance technicians] find a problem," says Bob Staples, director of avionics for Midcoast Aviation. Avionics suppliers see the NFF rate at fixed-base operators (FBOs) and repair stations, such as Midcoast, as being comparable to the airlines' NFF rate, according to Kirk Weber, vice president of maintenance operations at Collins Aviation Services, a unit of Rockwell Collins. Regional carriers face the problem, too, and probably experience the most NFFs due to shorter turn times and flight legs, says Jim Saltigerald, a reliability analyst in the maintenance department at Air Wisconsin, in Appleton, Wis.

The NFF problem also is damaging in that it "seems to have caused a bit of friction between the OEMs and operators," says an industry official. "OEMs seem to think the operator hasn't done his homework or may be just `shotgunning' to get the aircraft back in operation, and operators think the OEMs don't do a very good job of getting to the bottom of the problem." Though both sides have a point, combatting the NFF problem will require cooperation and continuous commmunications between the operators and OEMs.

How bad is the problem and what is the industry doing to help mitigate it? Avionics Magazine talked to airline operators, repair station technicians, and OEM managers in an attempt to find the answers.

That NFF is a major problem, nearly everyone agrees. The problem is not new, but many believe it is getting worse, in part because today's highly complex aircraft are equipped with more and more electronic sensors, computers, control functions and wires.

"The number I see is about 35 percent of incoming repairs--our equipment coming into our shops--are NFF," says Weber. Other airlines believe the NFF problem, combined with the "can not duplicate" (CND) during testing problem, account for 40 to 60 percent of all reported component failures.

Weber believes "mis-pulls" by the airlines represent up to two-thirds of the NFFs. The other one-third he labels "NFF yet." That means the usual "return to service" test doesn't catch the fault or the fault is intermittent.

Many factors can cause an NFF. Here are just a few examples.

Midcoast urges its technicians to ask for more help from the OEM, particularly if a component has been returned more than once (and not fixed) or when the maintenance staff is working on new or unfamiliar equipment.

The airlines also encourage the OEMs' early involvement in maintenance problems. You can pull in resources from the vendor either by sending the part back or getting engineering help, says Delta's Story. He says his company "generally has a spares supply sufficient to absorb the loss of a unit sent out for engineering investigation."

And, of course, operators expect the OEMs to solicit dialog to prevent NFF. Staples contrasts an OEM that simply stamps a component "NFF" from an OEM that requests more information for, say, a slightly different test. "That's being proactive and doing a good job on the bench," he states.

In turn, OEMs seek all available information on the components they test. Honeywell, for example, requests that a copy of the central maintenance computer printout for the self-test be attached to other rejection information. If it becomes NFF, the supplier will not charge for recertifying the unit. A number of airframe OEMs have asked the suppliers to respect this policy, Paull says.

The NFF designation can be like the proverbial "scarlet letter," in that operators or whoever sends a component for test and repair are reluctant to accept it as fully serviceable. Jet Aviation's Heydt says his company is reluctant to accept NFF components and teaches its technicians to ask the vendor for a better explanation. Likewise, Midcoast takes a hard line. "We're reluctant, if ever, to accept a NFF designation," Staples maintains. "At times, even on in-service equipment, where they won't agree and keep saying `nothing is wrong with the box,' we refuse to take it back. They have to give us a loaner or exchange."

If the boxes themselves fail more than twice, Garrett technicians talk to the equipment OEM to get a replacement box-whether as an exchange or a new box. "The goal is to try to get rid of the bad box from that aircraft and get it out of the marketplace," Elliott says.

"We've had some customers who, after a box was sent back a couple of times for repair and wasn't fixed, just don't want the unit back," Staples says. The manufacturers usually will honor an exchange, he adds, "once you've made your case--whether the unit is under warranty or not." Likewise, airlines commonly set a standard that once the performance of a unit drops below a threshold, "you have to do something," says Story. "You can't just write it NFF and turn it back out."

Some avionics OEMs offer to waive charges for a replacement unit if a central maintenance computer and other supporting documentation are furnished. "That certainly is a step in the right direction," Story feels. But it is still "a bad thing when this omnipotent intelligence sitting in a CMC says, `remove this perfectly good box.'"

In the corporate market Honeywell offers a spares exchange program during the warranty period. "They will call us, describe the fault condition, and tell us the equipment they would like to replace," Paull says. Many corporate operators want to continue this arrangement after the warranty expires, he adds.

Honeywell, which operates 14 of its own repair stations worldwide, provides an incentive to customers that assign all their maintenance work to Honeywell under a flight-hour agreement. If the operator can improve on an NFF rate, Honeywell will give back some of the money paid for maintenance.

Likewise, Collins offers its rotable total service solution (RTSS), an asset management program, for several customers, including Mesa Airways. It manages support of not only its own equipment, but that of other manufacturers.

The OEMs also try to reduce NFF by offering training. Honeywell has set up an E-broadcast, interactive training program using the Internet. To reduce the mis-pulls by airline technicians, Collins assigns field service reps or engineers on site and hands out printed guides to help with troubleshooting. Collins also provides training for airline technicians at its Cedar Rapids facilities.

Despite the paradox of CMCs and BITE creating maintenance problems as well as detecting them, can new technology help reduce the NFF problem? In some ways, it can.

Lessons learned about no fault found have been incorporated into aircraft designs. "With the Boeing 777, it was the first time we had been asked to map every fault condition that might exist in the integrated cockpit environment," Paull says. "The 777 introduced a dramatic reduction in the NFF rate."

For corporate operators, Honeywell, using a modeling tool devised for its Boeing 777 system, is introducing a version of its aircraft maintenance operations support system (AMOSS) for eight bizjet models equipped with its Primus Epic avionics suite. "If customers have some learning challenges with the new integrated suite, we use this version of AMOSS to put in the cockpit effects that show them how we can drive down to the most probable fault," Paull says. He adds that Honeywell would license AMOSS to third parties.

Another Honeywell development is an onboard avionics box that, upon landing, will use a simple wireless connection to transmit information on the aircraft condition, including electronic engine control data, directly to maintenance personnel.

Story, who is past chairman of AMC and currently Delta's representative to the AMC steering committee, feels that new aircraft such as the Boeing 787 have the opportunity to greatly reduce the NFF problem. They will have many more functions concentrated across fewer line replaceable units, he says. "As a result, there will be fewer opportunities to remove a good unit, and a higher probability that any random component removed will be the faulty unit." 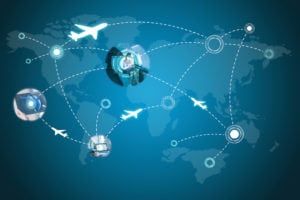