That's one of the benefits of a new fan-bearing vibration monitor developed by Inflight Warning Systems Inc., (IWS) of Yorba Linda, Calif. The monitor detects failing fan rotor bearings, shuts the fan down and notifies the flight crew before catastrophic bearing failure leads to rotor contact with the housing and the associated smoke event.

If smoke persists, it must be from another source. A perfect illustration of the problem comes from Swissair Flight 111, which crashed in 1998 from a runaway electrical fire in the area over the cockpit. The flight crew noticed an abnormal odor in the cockpit and concluded that the origin was in the air conditioning system. They elected to divert, dumping fuel in preparation so as to avoid an overweight landing. By the time the crew realized that it wasn't a garden-variety air conditioning problem, it was too late. The fire burst into the cockpit and knocked out both the synoptic displays and the standby instruments.

The monitor developed by IWS is a one-piece metal box that measures 2 by 2 by 5 inches (4.08 by 4.08 by 12.7 cm) and contains a sensor, software and circuitry. The box aids in transmitting the vibrations of the fan to the sensor. Algorithms developed by IWS during the past three years measure the vibrations, detect an abnormal situation, and order a shutdown of the fan.

To be sure, the fan is protected by circuit breakers, but they only trip after failure has occurred. For example, a metal-to-metal contact or surface fatigue failure results in higher operating temperature and increased vibration levels that precipitate hard failure. However, if the mechanical interference is minor, the fan continues to operate, generating smoke and odor from the blade tip or rotor hub. In this situation, the monitor will detect the anomaly and interrupt power to the fan. A "FAN INOP" message will be displayed in the cockpit and, for diagnostic purposes, the monitor displays the reason for the shutdown via light emitting diode (LED) color indication.

The monitors can help avoid in-flight diversions. Consider this report, datelined Aug. 23, 2004: "A British Airways flight was forced to make an emergency landing in Montreal on Sunday after a malfunctioning air conditioning system sent a burning odor into the craft. The jet with 300 passengers resumed its flight late Sunday night after making the unscheduled stop at Pierre Elliott Trudeau International Airport early Sunday morning. British Airways officials said someone on the flight reported smelling smoke. The plane was en route to London from Phoenix, Ariz. There were no injuries. The burning odor was caused by a malfunctioning air conditioning system."

About 175 monitors have been in service for the past five years with a major U.S. airline. They have accumulated more than 700,000 operating hours, mainly on Boeing 767 jets, and also a smattering of B757s. They have demonstrated the validity of the concept. With no monitor the fan removal rate was 3.3 of about 200 installed, and 23 percent of those removed were found to be fault-free (e.g., false alarms). With the monitors, the removal rate was 2.8, and all of them were found to have some sort of problem.

Installations on B747 and MD-80 series aircraft will commence as soon as supplemental type certificates are obtained from FAA.

The virtue is more than just improved reliability of the air conditioning system. As Stephen Ehrick, president of IWS observed, "The monitor eliminates incidents of smoke that are not really a threat to the airplane."

The monitor's importance is heightened because the crew knows, if there is smoke, it is not caused by a problem with a fan. They therefore can focus on more sinister problems with the electrical system.

Which brings us back to the Swissair tragedy. They were dumping fuel in anticipation of a diversion to Halifax, under the assumption that they had an air conditioning problem. Yet, while they were preparing for the landing in Halifax, a fire was spreading above the ceiling in the front area of the aircraft.

Had they known the problem wasn't with their air conditioning, they might have foregone the fuel dumping and gotten the overweight airplane on the ground. As a Boeing memorandum, issued after the crash, said: "If serious short circuiting has occurred, complete isolation of a bus may not be possible."

The memorandum added: "One thing for sure is that smoke is not normal." The air conditioning fan monitor emphasizes that point by eliminating smoke caused by incipient bearing failure. 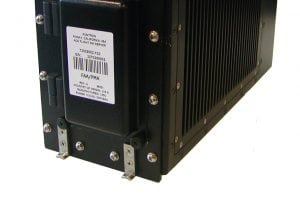