Thales has demonstrated its TopSeries in-flight entertainment (IFE) system for the Airbus A380 at the Hamburg, Germany, test lab. The audio and video on-demand system will be the first passenger system installed on the new A380. Visit www.thalesgroup.com.

The White House on Dec. 8, 2004, authorized a new policy for space-based positioning, navigation, timing and augmentation. The policy--which creates a permanent Executive Committee co-chaired by the deputy secretaries of the departments of Defense (DoD) and Transportation (DoT)--will provide a "more effective voice for the civil sector in decisions about GPS modernization than we've had up to now," claimed Jeffrey Shane, DoT undersecretary for policy. The policy in effect recognizes the growing importance of civilian applications for the military-owned and -controlled GPS system. "We expect that civilian equities will be taken far more seriously," Shane said. DoT's top priorities are establishing a means to monitor the civil signals and keeping up with whatever civilian signals may be offered by "alternative systems," i.e., Europe's Galileo.

The policy asserts that the U.S. government will continue to provide uninterrupted worldwide access to GPS services free of direct user fees, improve system performance, and encourage international use of GPS services and augmentations. International use of GPS augmentations already is increasing, as India has adopted a version of the U.S. wide area augmentation system (WAAS). Japan is moving toward a similar system. FAA so far has spent $950 million on WAAS.

The policy also calls for the Department of Homeland Security to ensure that procedures are developed, implemented and exercised to deny hostile use of GPS within the United States, prompting some to wonder whether such denials also would be triggered by crises abroad. The policy repeatedly asserts the intention to deny adversaries the use not only of GPS but of similar satellite-based systems, if necessary. However, the implications for civil and military budgets and programs, which will indicate what effects the policy actually will have, won't emerge for some time. Visit www.ostp.gov.

The U.S. moved another step towards legalizing passenger use of personal cell phones on commercial carriers. In December the U.S. Federal Communications Commission (FCC) proposed relaxing its ban on cell phoning aloft if off-the-shelf wireless handsets operate at their lowest power settings under the control of an onboard "pico cell" and do not interfere with terrestrial cell systems. FCC asked for public comment on whether the proposal should apply to devices in bands such as personal communications or advanced wireless services, or only to devices in the 800-MHz cellular spectrum. The wireless services regulator, which has taken this move "to increase communications options available to the traveling public, as well as public safety personnel," cautioned that its actions ultimately will be subject to the rules and policies of FAA and aircraft operators. Visit www.fcc.gov.

DPI Labs Inc., La Verne, Calif., has selected Tandberg to provide the technology that will bring video conferencing to the business jet world. DPI Labs will use Tandberg's visual communications solutions in conjunction with its own equipment to allow for in-flight visual communications. Visit www.dpilabs.com.

A new Mode 5 identification friend or foe (IFF) system recently completed a joint flight test at Naval Air Station Patuxent River, Md. The U.S. Navy spearheaded the development of the Mode 5 IFF waveform under a joint services/NATO initiative. The new system is intended to improve modulation, encryption, coding and data capacity, compared with the current system. An aircraft using Mode 5 sends out a secure signal that only similarly equipped platforms can decode. The Navy expects a technical evaluation in 2006 and initial operational capability in 2007. Flight tests with the Italian military are planned next summer. Visit www.navair.navy.mil.

Under an agreement with Sukhoi Civil Aircraft Co., Thales will develop and integrate the full avionics suite for the Russian Regional Jet (RRJ), including the cockpit displays, communications, navigation and surveillance systems. Thales also received a 70-million contract for the first batch of equipment. Visit www.thalesgroup.com.

SITA Inc. and Luxembourg-based Cargolux International Airlines SA have formed a company to provide information technology (IT) solutions solely to the air cargo industry. SITA's SITA Cargo Ltd. and Cargolux's Champ Cargosystems SA will merge to form the new firm, which will be based in Luxembourg. It will have a customer base of more than 50 cargo airlines. Visit www.sita.aero.com and www.cargolux.com.

Boeing has selected Honeywell's new Astreon light emitting diode (LED) systems for flight critical exterior lighting on its new 7E7 Dreamliner. This is the fourth Honeywell system to go on the Dreamliner. All told, the systems represent a program value of more than $2.6 billion dollars for Honeywell over the life of the 7E7 program. Visit www.honeywell.com.

The Irish Aviation Authority (IAA) and the UK's National Air Traffic Services (NATS) have commissioned a study that could help Europe achieve the Single European Sky. The study, to be carried out by an independent consultant, will focus on the issues associated with establishing a functional airspace block. Preliminary results are expected this year. Visit www.iaa.ie and www.nats.co.uk.

Heico Corp., Miami, had acquired the business, most of the assets and certain liabilities of Connectronics Corp. and its affiliate Wiremax Ltd. Connectronics produces specialty high-voltage interconnection devices and wires that are used in aircraft missile defense, fighter pilot helmet displays, avionics systems and wireless communication, among others. Visit www.heico.com and www.connectronicscorp.com.

Tallahassee Technologies Inc., a subsidiary of Israel-based Tadiran Communications, has won a five-year contract worth up to $80 million to support the U.S. Army's combat net radio. The award from the Army Communications-Electronics Command covers the RT-1523A and D models of the single-channel ground and airborne radio system (SINCGARS) and associated items. Visit www.tadcomm.com.

L-3 Communications subsidiary Wescam announced that it will supply electro-optical (EO) and infrared (IR) imaging sensors for Project Guardian, the New Zealand Air Forces' P-3K maritime patrol aircraft upgrade program. Six aircraft will be upgraded with Wescam MX-20 multisensor EO/IR imaging turrets and a new mission management system. The equipment will be delivered and installed throughout the first half of 2005. Visit www.l-3com.com.

The U.S. Air Force, along with five European air forces--Belgium, Denmark, the Netherlands, Norway and Portugal--will receive F-16 upgrades, including the Link 16 data link and a helmet-mounted cueingsystem. Visit www.lockheedmartin.com.

Three GLONASS navigation satellites were launched into orbit by a Proton K rocket from the Baikonur Cosmodrome in Kazakhstan on Dec. 26. The Russian satellites were put into a transfer orbit, bringing the number of orbiting satellites to 16. The GLONASS system is the Russian equivalent to the American GPS and European Galileo.

Barco will maintain and further develop the ERIS human-machine interface package for air traffic controllers and pilots under an 18-month outsourcing contract from Eurocontrol. ERIS, the European air traffic management Reference Industry-based Simulation and trials platform, was developed by the Eurocontrol Experimental Center to aid validation activities for the European ATM program and the Single European Sky initiative. Visit www.barco.com.

The Bulgarian minister of defense announced the selection of a team led by Elbit Systems and Lockheed Martin for a program to upgrade 12 Mi-24 combat helicopters and six Mi-17 transport helicopters, so that they comply with NATO standards. Visit www.elbitsystems.com.

Rannoch Corp. has completed initial flight test of its enhanced runway incursion alerting product, PathProx, on a BE-200 King Air aircraft. Rannoch has added airborne separation monitoring and conflict alerting features to the system it originally developed under a cooperative agreement with NASA. Rannoch's partner, Strategic Aeronautics Inc., has integrated PathProx into an electronic flight bag for general aviation. Visit www.rannoch.com and www.airscene.com.

Jeppesen Charts Operational on A380 EFB 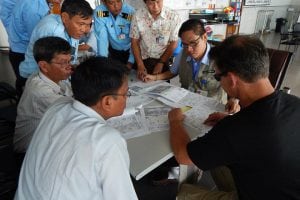