Ask a question about cabin management systems and the reply is often another question: What do you mean by cabin management? The term has become part of the aviation world’s lexicon since the early 1990s, yet remains somewhat undefined.

First, cabin management systems aboard air transport aircraft perform quite different functions than those aboard business jets. Only the crew operate the system on airliners, where lighting and other seat controls are considered separate from the cabin management system. Conversely, on bizjets, the passenger–a company president or head-of-state–often controls the system, which in turn controls the entire cabin environment, including in-flight entertainment (IFE) and lighting.

Currently, the main focus for the manufacturers of automated, digital cabin management systems is on the corporate market, where the systems requested are more high-tech and more often replaced, to serve the needs of every new owner of an aircraft. The system typically changes when an aircraft is sold, which often is within five years.

The new owner wants his or her aircraft to meet his or her needs and also appeal to his or her tastes, so cosmetics are important, says John Ervin, product manager of cabin systems for Airshow Pacific Systems out of Kirkland, Wash. Ervin compares corporate cabin management systems to jewelry. "Requests can be quite exotic," he says. "They like touch screens, but the gold buttons are more important."

The market for corporate cabin management systems is robust and has been growing, says Ervin, but so has competition, especially since the launch of the Bombardier Global Express, he notes.

Generally, according to Bill Wall, executive vice president of East Coast Avionics, cabin management systems are installed in business jets the size of the Global Express, Challenger 600/604, Gulfstream IV and V, and larger–including, of course, the Boeing Business Jet and Airbus ACJ. "These are the aircraft that can afford the room [for the systems]," he adds.

Ervin estimates a worldwide market potential of about 5,000 business jets annually. Dollar-wise, he says, the "ballpark" range for the cabin management system market is $150 million to $200 million per year worldwide, but adds that $200 million may even be a little low, because this market is growing as new products and functions are integrated into the management system.

On Air Force One

DPI Labs has accommodated perhaps the most demanding VIP customer, outfitting Air Force One with its Smart Link III cabin management system. This highly customized system is designed for use by all passengers–including, we presume, the President of the United States–as well as crew.

Air Force One has multiple small servers (perhaps 50) located throughout the aircraft. Hart explains that this configuration provides flexibility; if a server goes down, as few as one-fortieth of the functions are lost.

And this particular system can also sense human movement and alter the environment accordingly. "The customer can actually change the behavior of the plane," says Hart. An example would be lights that are programmed to dim as a person enters the sleeping quarters.

Beyond Air Force One, most VIP aircraft owners generally seek three features in their cabin management systems: ease of installation, ease of control by the passenger/VIP, and customization. To accommodate the latter feature most cabin management system manufacturers offer systems with different levels of complexity, says Wall.

Make It Easy to Use

And cabin management systems can be complex. "The complexity of what goes on in the cabin rivals what goes on in the cockpit," says Dan Barwick, chairman and CEO of Baker Electronics Inc. and also a pilot. The systems usually must control the aircraft lighting, temperature and the IFE package, which can include DVD, VCR, audio, even live TV. And several of these systems may be in use simultaneously.

The challenge for manufacturers, Barwick adds, is to make these systems easier for the user to control. He says the manufacturers today are trying to address this by moving toward touch screens and other user-friendly equipment.

According to Wall, one new owner of a business jet cried "What’s this!" when he was handed a computer keyboard to control his cabin environment. Beyond the touch screen display, usually located next to the aircraft galley, only a couple of buttons, for light and audio-volume control, are usually located next to the cabin seating–but generally, there are no keyboards.

Most cabin management systems in the larger business jets have touch screens showing multi-level menus. Some menus include modes in which a series of events occur with just one push of the finger. A "theater mode," for example, would automatically lower the window shades, dim the lights, and start the DVD or VCR player.

Some special requests can be quite uncommon. Barwick tells of a "prayer platform" that uses GPS coordinates so that the principal passenger can face Mecca and of toilets that can be flushed from the cockpit.

Water has become more prevalent on business aircraft, for sinks, toilets and showers. And water pressure and water volume, too, can be monitored by the cabin management system, though it also may be part of the galley control. "That largely would be a crew member’s responsibility," says Wall, of the on-board water situation, "not the passenger’s."

Most cabin management systems use 115 volts, 400 cycle or 28 volt DC, says Wall, and they typically are powered by the aircraft bus. Therefore, the control of power for cabin systems remains in the cockpit. To ease pilot workload, many aircraft completion centers install a single switch to cut all power to the cabin, in case of an emergency. This precludes the need for crewmen to search for the right circuit breaker.

Some in the completion field suspect the U.S. Federal Aviation Administration is considering additional regulation that will require for Part 25 aircraft (12,500 pounds and heavier) the quick and easy management in the cockpit of cabin system power, should an emergency occur. 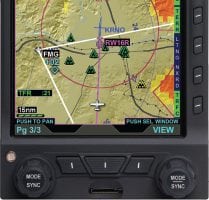