Although Inmarsat is still the No. 1 choice for bizjet satellite communications, the cost of these advanced antennas and electronics systems is high, and the installation is complex. So customers who don't need multiple channels and data rates up to 128 Kbits/s are beginning to vote with their wallets. They are choosing Iridium.

"Iridium is [enjoying] a boom lately," observes Bob Staples, director of avionics for Midcoast Aviation, headquartered near St. Louis. Midcoast installed about 10 Iridium systems last year and expects to put in about two dozen this year. It typically installs about eight Inmarsat systems a year.

Garrett Aviation and Jet Aviation likewise have seen an uptick in Iridium interest. Garrett has installed five Iridium systems over the past six months, says Mike Anderson, director of avionics at Garrett's headquarters in Phoenix, Ariz. Jet Aviation is installing a system on a Falcon 50 and will put one on a Challenger 604.

"The price [of Iridium] is unbelievably correct," says Brian Wilson, avionics and engineering manager for Jet Aviation. An Inmarsat high-gain system comes in at $300,000 to $400,000 or more, including everything, but a basic Iridium installation runs between $30,000 and $60,000.

If a completion center were installing only the simplest Iridium system, an aircraft might be down four or five days, Anderson estimates. The most basic Inmarsat installation, on the other hand, would consume at least two weeks.

Part of the tradeoff is the channel count. With the Honeywell/Thales MCS-7000 Inmarsat satcom system, for example, there are seven channels. Four people could call, one could fax and one could e-mail, all at the same time. "If you want an office in the sky, with high-speed data and Internet connectivity, you would spend the money [on Inmarsat]," says Anderson. However, it is still possible to be connected and send small e-mail files with Iridium at the lower data rate of about 2.4 Kbits/s, he adds.

One reason for the cost difference is the relative complexity of the antennas and the installations. Iridium satellites, in low Earth orbit, are only about 485 miles (730 km) in altitude. The antennas therefore can be simpler, smaller, lighter and lower in gain than Inmarsat antennas, which have to capture signals from 24,000 miles (38,600 km) up.

Iridium antennas don't require complex and expensive mechanical or electronic steering. The Iridium/GPS antenna manufactured by Sensor Systems Inc., for example, weighs only 6 ounces (168 g). Like a hockey puck, the device is 3.5 inches (9 cm) in diameter, with Iridium and GPS elements embedded in lightweight, thermoset plastic material. It can be used on aircraft as small as a Cessna 172, the company says.

The antenna comes with four fastener holes and a coax connector, Staples says. You have to cut a hole in the fuselage and use a doubler, a small plate inside the fuselage to distribute the load. But it's far less complicated than most antenna installations. Most Iridium phone systems use the same L-band transceiver, which is about the size of a PC power supply.

A 16-ounce (0.45-kg) dual Iridium antenna from Sensor Systems allows a handset in the cockpit as well as the cabin, but is slightly more expensive to install because it requires two coaxial feeds. One customer installed four dual antennas in a Boeing Business Jet (BBJ) to provide eight handsets, Sensor Systems says.

The Iridium antenna does not need to be aimed. Like a cell phone antenna, its coverage is omnidirectional. It can be fixed on top of the fuselage and mounted with relatively low cost and complexity.

Inmarsat antennas are mechanically steered or electronically steered. The former type requires a steering mechanism, a lot of moving parts, and a radome big enough to cover the whole range of antenna motion.

In this type of installation, you have to take the top tail cap off and add a somewhat larger radome that can accommodate the antenna, Anderson explains. Low-loss coax cables are used to connect the antenna to the high power amplifier in an aft compartment. The antenna, however, fits in the standard tail radome of the Citation X without modification and has been installed on aircraft as small as a Falcon 20, according to EMS.

Chelton, meanwhile, has unveiled an 11-pound (5-kg), tail-mounted Aero H/H+ and Swift64 antenna, the HGA-6000, which will compete in this area. It boasts a built-in beam steering unit (see story, page 50).

For customers who have a fair amount of fuselage real estate to dispose of, there are also electronically steered, phased array Inmarsat Aero H/H+/Swift64 antennas. Chelton provides a 19-pound (9-kg), electronically steered antenna measuring about 34 inches long, 12 inches wide and 2 inches high (86 by 30 by 5 cm). Initially, this surfboard-style antenna was installed on a number of government and military aircraft. But the HGA-7000 now is being mounted on a civilian Falcon 2000EX and a Gulfstream G200.

EMS plans to introduce a fuselage-mounted Inmarsat high-gain antenna next year. The AMT-3800, an electronically steered, phased array antenna, will fit on a wide array of aircraft, including the Cessna Sovereign, Embraer Legacy, Bombardier 300 and Gulfstream 100, 150 and 200, the company says. The unit measures 36 inches long, 12 inches wide and about 2 inches high (91 by 30 by 5 cm).

Inmarsat satcom is still the first choice of most people, says Staples. Of the 10 "green" Challenger 604s Midcoast plans on completing this year, probably six to eight of them will get Inmarsat.

One Midcoast customer even wanted a dual Inmarsat installation on two GIVs and a GV, Staples recalls. (The customer's chairman of the board ordered the modification after having experienced a loss of satcom shortly after takeoff.) Midcoast installed dual Honeywell MCS-6000 Inmarsat Aero H+ satcoms plus dual MagnaStar systems.

The MagnaStar system, distributed by Teledyne Controls, is an air-to-ground radio phone for continental use. If you're calling from over the United States, you can connect via a MagnaStar ground station and reach anywhere in the world over the standard phone system.

Midcoast has outfitted some airplanes with Iridium as a backup to Aero H. Others have begun to install a combination of the Iridium voice system and the EMS high-speed data system on Global Express, BBJ and Challenger 604 aircraft, EMS says. 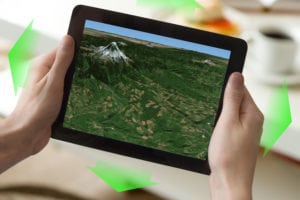